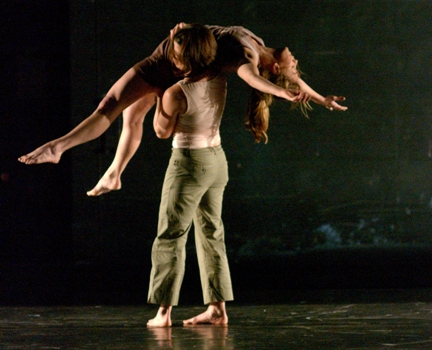 Is politics a subject for dance? There is good precedent for choreographers to protest and propagandize through dance/movement, as did the dancers of the 1930s and ’40s. Haft in “T:here” and Tawil in “Thieves” both make a good case for their causes. But somehow neither work is ultimately convincing.

For these performances, SF International Arts Festival suffered a visa rejection to two of their promised musician/dancers from the company Iraqi Bodies. They were to accompany Tawil’s piece and dance one of their own. Instead, the Iraqi group (called The Lazy Sleepers) were heard on tape. Dancers Jeremiah Crank and Roche Janken provided a stop-and-go performance, in that both their solo work and their interaction were shot full of frozen moments, still-shaped postures.

Crank is a gifted artist; his range of movement and dramatic intensity filled the stage. Janken, though capable, failed to create the same effect. Perhaps since she wore a loose work shirt, viewers were not able to sense the clear lines of gesture that was so forcefully executed by her partner. The music, with its constant beat and varying melodic lines, went on and on. So did the dance, ultimately weakening its emotional impact. Some viewers saw implications of the Iraq war in the piece. Just who are the thieves? They who fight or they who fight back? Tawil’s work has great potential as pure dance, message or no message, if it were shorter and the duet interactions stronger. Music technology for the piece was by Lars J. Brouwer; Clyde sheets designed lights.

“T:here”, a dance travelogue, was made evident through the use of slides from Haft’s journey with her company to Amman, Ramallah, Bethlehem and Jerusalem. She chose to bring the Palestine people’s “striving for the right to return to their homes and land of origin” as subject matter for “T:here.” The dramatic action centers on the funeral of a girl killed accidently on the first night of their stay. Frank Shawl and Lisa Bush did a moving dance of consolation, but finally there was no consolation. Edmer Lazaro contributed notable solos. There is an episode of “Resistance,” but the major sections of “T:here” consisted of lively Palestinian group folk dance. Although the visuals are effective and the poetry “Identity Cared 1964” by Jehad Al Shamarkheh and Ziad Abbas is moving, the work needs expansion and narrative to carry its message.