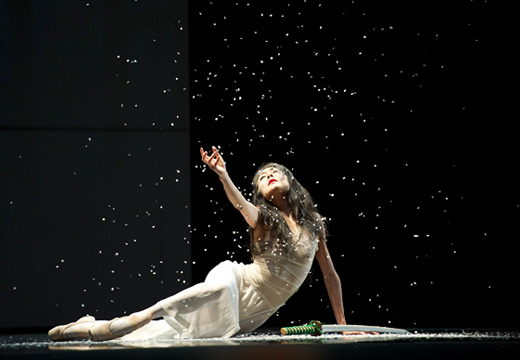 Careful what you ask for; you just might get it. Full of enthusiasm to see “Raymonda,” the opening work on San Francisco Ballet’s sixth program in the current series, I was soon disappointed. Good thing I stayed because I loved the two ballets that followed.

Famed Russian defector/dancer Rudolf Nureyev reworked the original Maryinsky Theater production of “Raymonda” by the renowned 19th century choreographer Marius Petipa for London’s Royal Ballet in the mid-1960s and again for the Paris Opera Ballet in 1983, but the creaks and quirks still show. It is interesting historically, and some of Alexander Glazunov’s music is quite glorious, but the Act III wedding scene, which is extrapolated here, is the usual series of divertissements familiar from the full-length Tchaikovsky ballets — and not nearly as good.

The best thing about it is Barry Kay’s set, which screams “Welcome to Imperial Russia” with gold pillars, chandeliers, icons and sumptuous wall hangings. Of course, it takes place in Hungary, but borders were more flexible in those days and the Hungarian motif gave Glazunov plenty of opportunity to delve into folk dances like the czardas and mazurka. The back story, about a noblewoman who is pursued by a Saracen during the Crusades only to be rescued by her own true love, hardly matters. Actually, since everyone was dressed somewhat similarly, it was hard to figure out which ones were Raymonda (Sofiane Sylve) and her beloved Jean (Tiit Helimets) until nearly the end.

Nureyev’s choreography, especially for the corps, was stiff and curiously earthbound — except for Jean who had some high-flying solo work near the end. Sarah Van Patten, Frances Chung and especially Vanessa Zahorian distinguished themselves with their solos and combined in a charming trio. Charlene Cohen had the last solo and she was a powerhouse.

Yuri Possokhov’s 2011 “RAkU”, to an arresting score by Shinji Eshima, replete with chanting monks from the San Francisco Zen Center, may not be to all tastes but I found it fascinating. It’s a vague tale of love and loss and a showcase for Yuan Yuan Tan — the nearest thing to a prima ballerina in the San Francisco roster. The music is a little like movie music, with percussive accents and Asian ambience. Four muscular men (Gaetano Amico, Jeremy Rucker, Sean Orza and Quinn Wharton) start things off with stylized stomping and then doors open on a couple (Tan and Damian Smith), obviously husband and wife. A projected backdrop (Alexander V. Nichols design) suggests spring. His dance is powerful, dominant. She is shy, like a delicate toy doll. Winter comes and the men return with samurai swords. They all march off and the woman is desolate.

She seeks solace in a temple (Zen chanting here) and a new man (Pascal Molat), somber, shaven-headed, perhaps a priest, pursues her in and out of panels. He is at once more savage and more gentle than her husband and he brings out a response in the woman. They come together and there is passion and yearning. But the warriors return with her husband’s sword and his ashes in an urn. Fire rears up on the backdrop. Mad with grief (or guilt?), the woman smears the ashes on herself and lies down in the snow — perhaps to die, perhaps to accept — the mood is all the more evocative for ambiguity. Possokhov, a former San Francisco principal dancer-turned-choreographer, has made a powerful work here. His choreography is interesting and innovative and beautifully realized by the three principals and the quartet of retainers.

But the big news was the world premiere of Scottish Ballet artistic director and choreographer Ashley Page’s “Guide to Strange Places,” set to a piece by Berkeley composer John Adams. It’s all about movement here as Adams creates a locomotive effect in the orchestra, complete with bells and whistles — literally. (As in the other works, Martin West conducts the terrific music.) Page matches this music with the movement onstage, his dancers whirling and jumping like perpetual-motion machines. Six couples in leotards of dark-hued purple, blue, burgundy and green take the lead with a small ensemble backing them. It’s push and pull and the stage darkens and there is a squeak of brakes and then it lightens and we’re on our way again. You’re never quite sure where the “Strange Places” of the title are but you can be certain that most of the fun is getting there.