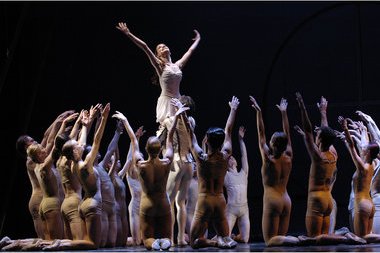 The Russian National Ballet Theatre’s lineup in the opening dates of its U.S. tour, which included “Chopiniana” and “Romeo and Juliet,” left much to be desired in the realms of both dancer performance and choreography.

“Chopiniana”—a choreographic arrangement for three soloists, five “nymphs” and a corps de ballet—was most captivating in its moments of simplicity; the corps de ballet flanked the stage in varying formations throughout the piece, creating picturesque scenes that framed the three soloists. In a moment of standout (though uncomplicated) choreography, members of the corps faced upstage en pointe, gracefully fluttering their arms in unison. In contrast to the corps choreography, Fokine’s solo choreography was at times ill-fit to its accompanying music. The male soloist performed a series of large, up-tempo jumps to a calm piano melody; the female soloists’ choreography seemed to be more directly representational of Chopin’s composition.

In addition, the male soloist lacked a sense of urgency in his movement, performing the majority of his choreography with a downcast gaze; it was apparent through his lack of fluidity in motion that he is somewhat new to the dance form than his female counterparts. The women, though more technically proficient dancers than their partner, overemphasized their épaulement to an almost grotesque degree. Épaulement, a French term meaning “shouldering,” dictates where a dancer’s head should be in relation to his or her shoulders; the RNBT dancers seemed to cock their heads in a stiff, unnatural-looking way after completing large leaps and arabesques. This habit showed itself again in a section of group choreography during “Romeo and Juliet,” leading one to conclude that perhaps the aesthetic choice is one made by company director Elena Radchenko (who has restaged this work).

“Romeo and Juliet,” though its costumes and scenery were highly sophisticated, lacked that same refinement in its performance. Though the soloists playing Romeo (Dimtry Shchemelinin) and Juliet (Maria Klyueva) were convincing in their roles as star-crossed lovers, the acting by the rest of the company was often caricature-like and therefore difficult to take seriously. Lady Capulet’s grief over the death of her nephew Tybalt, for example, was an overdramatic sobfest, complete with fist-pounding on the floor. Her reaction was especially heinous following an uneventful Tybalt-Mercuitio-Romeo fight scene; Tybalt stabbed Mercutio (friend of Romeo) with little to no emphasis, and Romeo did little better when killing Tybalt. The second half of this abridged version of “R&J” was, at times, emotionally ill-interpreted as well; Romeo expressed his grief through quadruple pirouettes and turning leaps on multiple occasions.

The performers dancing the roles of Juliet and Father Capulet proved to be the evening’s real stars, delivering their choreography with a true sense of release and abandon. This willingness to sidestep the company’s regimented ballet lines allowed for the dancers’ emotions to fully develop, resulting in what were the evening’s most solid performances.

Both the Montagues—and the rest of the RNBT company members—could learn a thing or two from these dancing Capulets.