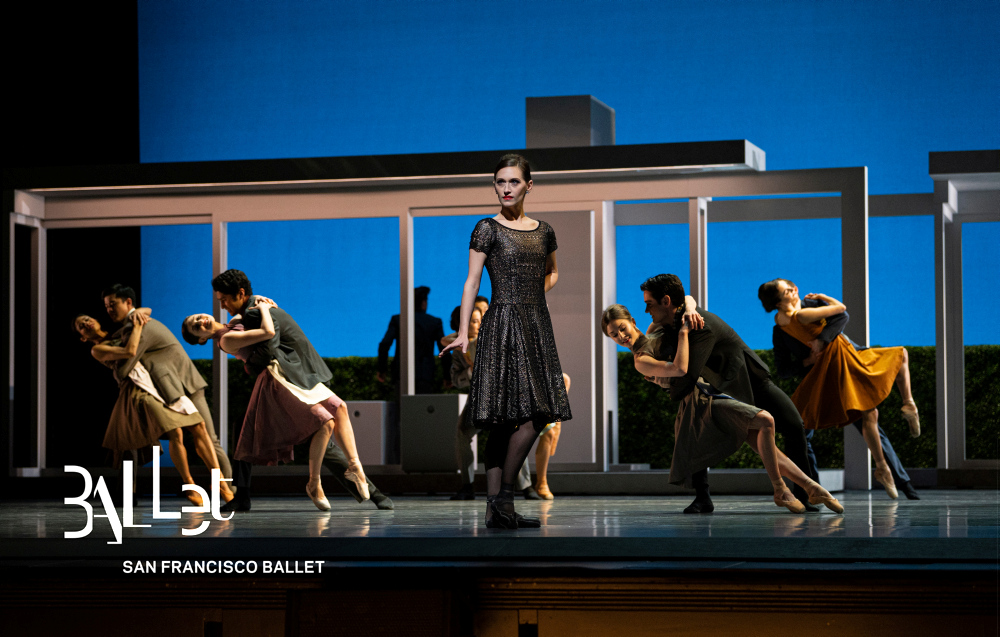 It doesn’t take long for a ballet student to grasp that dance is a bundle of contradictions: you go up to go down, down to go up, pivot right to turn left, and left to turn right. So, it follows that to celebrate a season that rings the curtain down on two years of its COVID moratorium, San Francisco Ballet debuts one of the darkest works ever to enter its repertoire, British choreographer Cathy Marston’s “Mrs. Robinson.” Marston has boldly set out to revise the storyline of the 1967 film, “The Graduate.” The film launched a watchword, coined poolside with a party guest’s cryptic advice to Benjamin Braddock: “Plastics.” It became a metaphor for an era that beckoned the clash of two contradictory value systems: one issuing from the harvest of post-WWII prosperity, which hectored young college graduates to “get ahead,” and the other, which grew out of the youth-driven protests against the Vietnam War, to disparage the profit motive and its allied industry of privilege and rapaciousness. If Marston’s dance theater triumph gets the exposure it deserves, her “Mrs. Robinson” could become a metaphor for a question the pre-women’s emancipation world wasn’t prepared to explore in 1967: After Benjamin dumps her for her daughter Elaine, whither Mrs. Robinson?

Sets and costumes by Patrick Kinmonth splay the contradictorily–solid, yet disturbingly unconvincing—medium in which suburban status seekers thrived. Their true believer wives, outfitted in primary colors and aprons, might as well have been stamped with the Good Housekeeping seal of approval. The men gang together wearing a stage version of the grey flannel suit, and the women arrive dutifully in rounds of chain-linked cannons, whipping up meals in the mimed bowls they carry as they pass through. These are the de rigeur uniformed ranks of the up-and-coming, en route to getting ahead. Their limitations are foreordained by an iron will to subordinate all honest sentiment to “keeping up with the Joneses,” a mantra invoked during a time when appearances meant everything.

Benjamin Braddock is not yet convinced to sign on. He may not know what he wants from his post-graduate life, but he is agoraphobic when it comes to the “mysterious hand” dipping into the plastics market. His parents’ neighbor, Mrs. Robinson, knows precisely what she doesn’t want—the life she suffers through as an outlier among the plastics graven image-worshiping wives. She also knows what she desires, at least for the moment we happen upon her, and that is the yet-to-be recruited Benjamin.

The score by Terry Davies is a perfect fit. Cow bells, violins and brass capture the countervailing machinations at work from startup to shut down. While Benjamin slips and slides, stopping only to refresh his brow in a recoil/reload response to Mrs. Robinson’s advances, she coolly mimes dragging on a cigarette. She’s the spider biding her time, awaiting the fly’s surrender. The duo tests every frantic, then tantric position pliant dancers can assume, until Benjamin’s contradictions find resolution in the thrall of Mrs. Robinson’s minx-like entreaties. In the film, Elaine is an outright rebel, ever much her mother’s daughter in finding the plastics road repugnant. The difference is that history has opened an alternative byway that her mother was never offered. Though she is not given her due in the film, it is apparent that it is not only her youthfulness that makes her a more attractive prospect than her mother in Benjamin’s eyes. Unfortunately, dramaturg Edward Kemp sidesteps that storyline, compounding the lost cinema thread of Elaine’s greater virtue and while Madison Keesler dances Elaine as a lovely dutiful daughter, she is deprived of the character she fully needs to be to believably win Benjamin’s heart and mind. Without it, Benjamin waxes as just one more cad who seizes an opportunity and moves on. He gamely slips out of Mrs. Robinson’s grasp, but not before reprising the identical set of nervous tics that presaged his loss of innocence. The Paradise Lost here is not seated in the dominion of Benjamin-as-St. Michael falling from grace. Rather, the “fall” occurs on Mrs. Robinson’s watch. She is like a prized specimen whose missteps have gotten her stuck in a hell of bonded hydrocarbons, until she finds her despondent way back to the dark stretch of the nothingness whence she came.

True to its title, Helgi Tomasson’s Tchaikovsky-inspired “Trio,” is a three-part work danced in its first movement with generous open-armed lifts and whipstitch piqué, by Sasha De Sola and Max Cauthorn, and spirited musicality in the third movement by Misa Kuranaga and Angelo Greco. The second movement is a boudoir drama. Luke Ingham partners a deftly gentle Dores André with uncommon tenderness. Daniel Deivison-Oliveira interrupts the couple to show himself a schemer with a treacherous plan. Ingham is bighearted in his gallantry and astute in his circumspection. Deivison-Oliveira’s hand slices across André’s chest in a sudden move to envelop her. Her better self seeks a democratic solution, attempting to share her charms to mollify each rival. She reaches toward the interloper, but then stretches to fall back into the waiting arms of the known quantity who is Ingham. It’s a tragic triangle fated to lose one of its sides but none of its angles.

“Symphony in C” is many a dancer’s favorite museum-piece challenge. Years of immersion in Balanchine style are evident in Jennifer Stahl’s and Julia Rowe’s conscious but unselfconscious dispatch of a complex work demanding speed and punctilious muscle memory in the allegro. Alternatively in the adagio, there is the confident purchase of Sarah Van Patten and Danish-burnished Ulrik Birkkjaer. Others in the cast soldier through amiably. There is occasionally slushy partnering.

The company emerges from its COVID-fortified trenches bright-eyed, with much to look forward to in the prospects of a new leadership drawing on the many talents of the recently named Artistic Director Tamara Rojo, who will succeed retiring Helgi Tomasson. Program 1 scores an encouraging victory for ballet in the aftermath of human loss, downsizing, shortages, and numerous other privations. It’s back, a living, moving art with a storied history, and its audience, looks to be, as cheerfully as ever, in for a penny, in for pound.