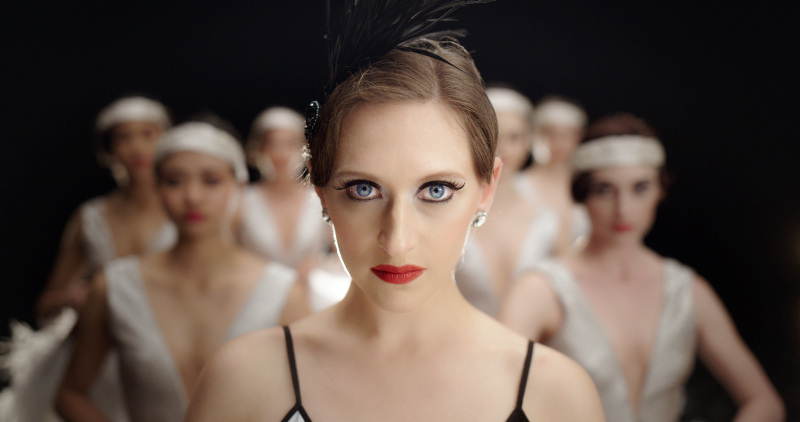 Program 03’s curator has posed several challenges as well as questions for the reviewer. Three contemporary story ballets overload one program. It takes at least two viewings to appreciate them in a filmed format. Two of the three, “Symphony #9” by Alexei Ratmansky and “Swimmer,” by Yuri Possokhov, are reconstructions of five-year-old archival footage, and the third, “Wooden Dimes,” by Danielle Rowe, debuts as an original filmed work. Should critics review the work of dancers who are no longer with the company?  All three works treat themes of social import and alienation, stemming from war, big business competition, and personal loss. These arrive for consideration amidst a global pandemic where millions of lives have been lost and bidding wars bog down vaccine distribution, only to incur greater numbers of dead. Reviewers must solicit access in order to review. Was the operating assumption that streamed material would not be reviewed, even though the public pays to see it?

Ratmanksy’s thematically ambitious Symphony #9 lacks important historical and musical context. Without offering a prologue, can you conscientiously tell a World War II story about the rarely acknowledged and little-known pivotal role of the Soviet Union in the defeat of fascism in Europe? Does the public realize that Shostakovich’s “Symphony No. 9” was intended as an occasional work to celebrate that victory? Doesn’t the audience deserve to know that the mother of all Stalin’s crimes was the 1923 betrayal of the 1917 Russian Revolution? It resulted in the 1939 signing of the Stalin-Hitler pact which presaged Germany’s invasion of Poland.  Without those reminders, won’t it look like Ratmansky has climbed onto the back of the widely,  if shamefully accepted misidentification of the word “communism” with Stalin’s perfidy? Doesn’t that leave the untutored audience a gaping hole to fill with nothing but cynicism and despair?  After all, despite what our history books have left out, in the final analysis, it was the revolutionary remnant of Soviet workers, not Stalin, who made the sacrifices that turned the tide.

The dancers executing Ratmansky’s canons did so with outstanding technique and musicality.  Aaron Robison and Jennifer Stahl engage in a stealthy pas de deux. Dores André and Joseph Walsh always relish completing each other’s choreographic phrases, and Wei Wang gives his all to wrap up the package in the finale. The strange thing about Ratmansky’s fast-paced constructions proposed to bind his oeuvre to Mother Russia, is that the steps read more as a Dance in the Americas survey course. We see fleet, academic Bournonville footwork, boomeranging Vaganova men, jazzy Robbins, exploratory pas de deux highs and lows, and Balanchine-style freewheeling musicality. Were it not for the Shostakovich-encumbered score, Russian character poses, and microscopic red flags popping up through the backdrop, the public might fail to see Russia from our (digitized) back porch.

Swimmer teleports us from the Eastern Front to the modern war of the individual against the dehumanizing “Nowhere Man” routine.  That belabored 2015 theme renders its rerun dated.  Under pandemic conditions, the commuter cog-in-the-machine of yesteryear has morphed into the work-from-home computer non-binary “uber.” It’s not the lifestyle that creates the affectless salary man and his cardboard cut-out family, but the opposite: The false personae who, unchallenged, are believed to inhabit only their Mad Men enclaves, can actually position themselves anywhere, even as private sector arts consiglieri! The self-auditing of their own shadowy role in the New York City Ballet scandals opened a window onto cocaine-enhanced arts funder events, with dancers trafficked with block-chain insouciance, virtually or in person. One can no longer subscribe to the manufactured cliché that double dealing is the exclusive preserve of the suburban rat-race.

Partnering in Swimmer’s post-poolside romp is a high point. Lauren Strongin is sublimely sensual as she reaches for an abundance of accomplishments: a pliant back, strong but languorous extensions, birch-like arms, and a brightly coy or gently softened gaze, even as Tiit Helimets drags her across the floor to the gravelly-voiced stylings of Tom Waits (musical score by Shinji Eshima). Principal Sofiane Sylve, serene in cerise, and Luke Ingham, add seasoned intimacy. They work through an intense pas de deux that leaves enough give for a cartwheel-to-floor split by Sylve.  Wanting Zhao, in an orange drape, wends with a compliant Walsh, from the depths to the shoals.

A boys-to-men sequence, where male students in business shirts and ties dance coltishly, is followed by an onrush of men in the grown-up iteration. Daniel Deivison-Oliveira leads the voltaic charge.

The man of the hour is principal dancer Joseph Walsh. He infuses all that he dances with a piquancy not often present in dance men.  It in no way detracts from the masculine quality of his work but serves to enhance it. It shows up as a counterintuitive stamina as he shivers through a moist solo replete with Swan Lake foot beats, or simmers through his pas de deux with the enchanting Wanting Zhao in Swimmer. It makes itself at home in his attack in Symphony #9’s walloping gallops. He never uses it to upstage a partner, having discovered early on that honoring one’s partner has its rich rewards.

The ghost that haunts the otherwise enchanting “Wooden Dimes” lives in the space between the trappings it purports to lament, and hidden traps the conceptualization falls into. Originally conceived of as a live debut at the Orpheum Theater, it is the only work of the three that was made for film. It retains the vaudeville frame and art deco flourishes that were meant to fold into the Orpheum’s decor.

A clutch of chorines, in silken white tops and flared shorts, preen in their dressing table mirrors. From among them emerges Sarah Van Patten’s vamp, Betty Fine, in a black and white art-deco costume, trimmed in cascades of shell fans (costumes by Emma Kingsbury.) It’s not only the navel-bound neckline that is ill-fitting: her character struggles with something more unsettling. Betty’s husband Frank, danced by Luke Ingham, is dressed for success in an early-Hugh Grant-ish way. Like Betty, he runs afoul of the dark side of his own ambitions. In a set piece, whenever there is a large board-room table, it becomes a character in its own right, and that character’s name is “Trouble.” Just as Frank finds himself under that table, Betty and Frank discover that they are both in over their heads. Betty has sold her soul to a seamy dalliance with her unctuous director (Tiit Helimets.) Her lassitude hardens into a brittle pushback. Neither she, now in street clothes, nor her man Frank, tie loosened, are a good fit for their hopes—or each other. The shift dress has the same reckless neckline cut as the fan costume. Regardless of which one she wears, what ends up revealed is not what’s on the inside, but what isn’t: a sense of self now irrevocably lost.

Three pas de deux link subtexts in Betty’s backstage surround.  Rowe’s choreographic sensibilities transfer in a sinister way to Van Patten’s duet with Helimets; in a flight of fancy to Madison Keesler’s with Nathaniel Remez; and with backstage grit to Dores André’s with Max Cauthorn. In them, we see the approach-avoidance paradox of a theater life in pursuit of a luminous path to artistry, intimacy, and trust. Betty’s path has been darkened by the misalliances that sabotaged rather than advanced her ambitions, personal and professional.

The work’s difficulties arise in confrontations with overbuilt sets and fetishized props. To the extent that the ensemble choreography is set to a score that chokes on its own overtones (music by James M. Stephenson), it ends up reinforcing those blandishments. Women are dancing on tiny dressing tabletops, then ducking collisions with ostrich-plume fans. Men in casino visors, who would have Frank gamble away his assets, partner board-table chairs. The ironic poke at the top of the piece reshapes it until it becomes one with the trappings it can’t decide whether to admire or deplore. Wooden dimes rule and become the coin of the realm.

Fortunately, all three works confect good showcase choreography for the dancers; unfortunately, we didn’t come for a recital. An audience that has been waiting so long for a great program deserves a well-balanced one, where the dramaturgical conflicts invite classical treatment, not last-decade consensus nods. Pyrotechnics set off to distract in other times, today, by contrast, only serve to make us painfully aware of just how layered, complex, and deep going are the tasks before us compared with those of bygone eras. Thirty years ago, advertisers prodded us to ask, “Where’s the beef?” Today, overworked doctors and nurses amass in front of medical facilities to demand, “Where’s relief?” Moreover, where’s the meaning? To answer that question, the pointed horns of current-day dilemmas call for scaling by at least one classical work.