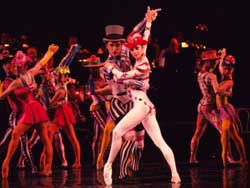 A night of mannerly British ballet after the Balanchine speed derby San Francisco recently experienced was like swearing off caffeine. Three works by Sir Frederick Ashton and the return of Kenneth MacMillan&#146;s cartoon-colored ragtime classic, Elite Syncopations, showed a different kind of genius altogether. Calm where the Americans tend to go ballistic, polite to the point of looking subdued, watching the works of Brits after Balanchine takes some getting used to. Ashton, who also would have turned 100 this year, never set about changing the world like Balanchine. His oeuvre seems more civilized, radiant, pearls compared to Mr. B&#146;s string of glittering diamonds, rubies and emeralds.

Adagio, the slow, sustained dancing which was Ashton&#146;s home territory as a choreographer, also takes a special kind of dancer. In Monotones I & II, the program opener, Ashton took the pianistic simplicity of composer Erik Satie&#146;s familiar Gnossienne and Gymnopedies (in an orchestral setting) and created two slow-moving dances for three. In the first pas de trois, Nicole Starbuck, Rachel Viselli and Ruben Martin, looked almost impatient for things to move along. Conductor Andrew Mogrelia&#146;s tempo was Ashtonian all the way, however, and when the second trio showed-up, Brett Bauer, Muriel Maffre and Moises Martin, taller in stature and possibly happier making lines than jumping around in petite allegro, showed what it meant to slow down and fill the strikingly simple, intertwined movements with great beauty. This was Maffre&#146;s evening. Her extensions were stunning as usual, but, more than that, she seemed to have just the right touch of serenity to her phrasing, a thorough understanding of the Royal Ballet style, and the ability to demonstrate it with complete confidence and clarity. And later in the evening, she got the biggest laughs.

Symphonic Variations, by some accounts Ashton&#146;s masterpiece (circa 1946), made a long overdue San Francisco Ballet premiere. Tellingly choreographed to Cesar Franck&#146;s Symphonic Variations for Piano and Orchestra, the piece is musically about as far as you can get from Balanchine&#146;s taste for Stravinsky. On a bright, spring-colored set and in simple white costumes, the six dancers (who never left the stage) created an ambience of wonder. Three couples co-mingled as Ashton played with the rules of the classical game–there were no obvious stars or leaders. Still, the center couple, Julie Diana and Damian Smith, were almost overshadowed by their bookends, Vanessa Zahorian with Joan Boada, and Tina LeBlanc and Nicolas Blanc. LeBlanc, who has been dancing with a glow around her all season, seemed particularly suited to the demands of this crisp and quiet piece of choreography. But it was Nicolas Blanc, the only Soloist in the group, who seemed to be dancing at a higher level, with the softest landings, clearest shapes and greatest musicality. He sang the steps.

If the music lacked drive, what Ashton underlined through movement were the shades and radiant moments in the score. Piano interludes (played with the right amount of emotion by Michael McGraw) and lush, cello-heavy string passages, each seemed to pronounce themselves more beautifully because of the dance that was drawn from these notes and measures. Stripped-down and deceptively difficult, this was a bravura-free zone. Instead, Symphonic Variations created something subtle, a dance that was an accumulation of details and surprises, a work of art unforgettable on its own terms.

Audience members were actually guffawing during Elite Syncopations. This crowd-pleaser by Kenneth MacMillan (Ashton&#146;s successor at the Royal Ballet) from 1974 included original costumes by Ian Spurling which were more entertaining than much of the dancing. Maffre, as the towering vs. tiny partner to the eager James Sofranko, pulled off her pratfalls with a winning combination of elegance and smirk, while Rachel Viselli and Stephen Legate got to be gloriously bad at dancing together. The rest of the piece, a collection of rags, twelve in all, familiar and not, became eventually tiresome, lacking in dynamic variety as they were–a little syncopation goes a long way. But the joy with which the company camped it up was infectious. They deserved to have some fun and so did the San Francisco audience.

Also on the program was the very short, very slight Thais Pas De Deux, a 1971 Ashton piece d&#146;occasion which has somehow lasted this long. Neither musically transporting nor choreographically interesting, Yuan Yuan Tan did her best to look ethereal as Pierre-Francois Vilanoba, visibly challenged by the partnering duties, looked the opposite.