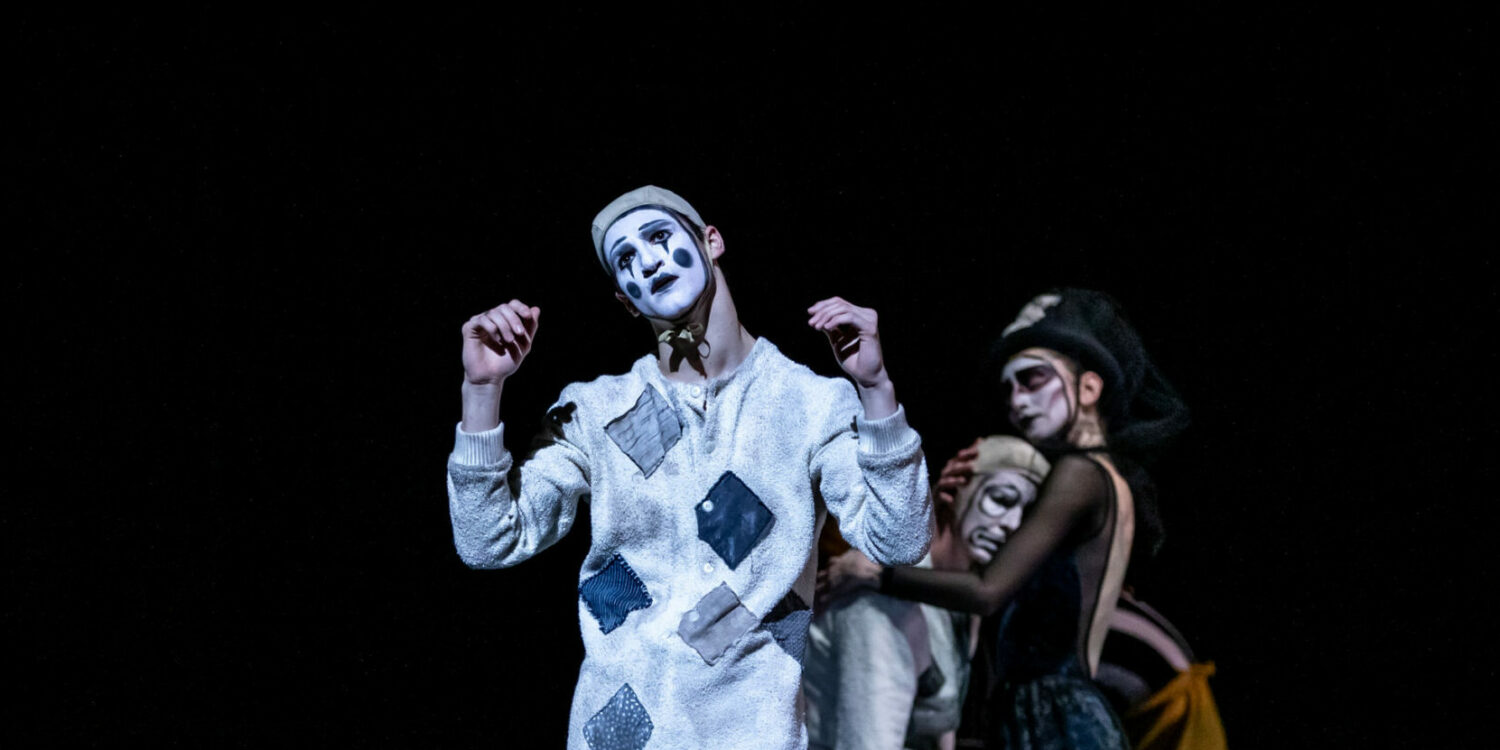 If you’ve covered season upon season of galas you could allow yourself to think that it’s possible to step into the same gala twice, but this one marks our return to the theater, unmasked, with no document checks at the door, and no social distancing in the house. Headlines tell us that COVID is far from over, but the operating assumption tonight is we have come in the spirit of collective immunity to assess the vital signs of ballet. Two works, “Excerpt from MADCAP,” by Danielle Rowe, and “Excerpt from Bolero,” by Yuka Oishi, confirm the health and endurance of San Francisco Ballet in a new era of managed COVID. It is the oldest ballet company in the United States, kicking off its 90th season with “The Next 90 Festival” in tandem with the gala. New Artistic Director Tamara Rojo asserts that a future “starts now” that will certify the company as “the best in the world.” If the gala is any indication, doomsday pronouncements that from among newly emerging choreographers, no lasting works will come, are wrong, and a house full to the rafters, bore exuberant witness that it wants to continue to see and appreciate them.

Rowe’s MADCAP is a paean to a dance theatre era when small troupes folded a crosscut of portable dance styles from folk or courtly, into the clown culture entertainment they took on the road. Jennifer Stahl, in diaphanous black, is The Oracle who goads both audience and performers. Tiit Helimets is The Clown. Parker Garrison as The Kid, and Jasmine Jimison as The Mirror, complete the quartet of characters that shimmer into an opening series of pas de deux. Drawing on waltz music arranged by the theatrically inspired British composer Philip Feeney, couples, presumably drawn from itinerant audiences, waltz their way into the story bumbling humbly to the strains of a calliope and just a brush stroke of Klezmer. With its echos of assays by Christopher Bruce, Trey McIntyre, and a nod to Michel Fokine’s “Petrouchka,” MADCAP pitches its own billowing tent in the village commons genre.

The evening’s opening piece, Robert Garland’s “Third Movement Excerpt from Haffner Serenade,” takes up a palette of colors to define onstage quadrants. Julia Rowe, in a chromatically scaled tutu of lavender, partnered by a high-energy Esteban Hernández in mauve, offers fluent yet well-articulated pathways for the ensemble to frame, each canon arriving in a mint green flurry of tulle. Hernández’ footwork is commanding, and the ensemble takes up the challenge. It’s as if the clock hands were turned back to a time when August Bournonville himself might be urging them on from the wings. Rowe bursts through all presumed seams and is joined by Hernández in a finale explosion of sugar-free épaulement, lovely lines, and ensemble endorsement.

Isaac Hernández and Dores André dance circles around each other in a breathless rendering of Helgi Tomasson’s “Balcony Pas de Deux from Romeo & Juliet,” to the proffered Prokofiev score. They capture their rapture in multiple arabesques turns, at that mad hour when “what light from yonder window breaks” is better conveyed by André’s madrugada port de bras stretches than Thomas Skelton’s unintelligible lighting. Hernández is boyishly gallant, and not the least bit fazed by the dizzying multiple turns that both partners must execute together or separately with a fast turnaround, where sudden implausible pauses render the nightscape even more worrying.

“Postscriptum” honors principal dancer Yuan Yuan Tan, whose 28 years with the company have contributed eponymously to its world class standing. An inspired confab arrives to celebrate her. She dances in flat slippers, drawing back a curtain on what happens when the body’s fluency is not held hostage to steadying one’s weight on a few battle-fatigued toes. With no such mental or physical concerns to hinder a long game, Tan elaborates the vicissitudes of a cityscape—a body of knowledge imparted by a knowledgeable body. She is taxied, walked, assembled, dragged, lifted, and engaged by her attentive partner, Aaron Robison, who reveres her every choice. Shinji Eshima’s exciting musical composition incites the project with a densely inventive compilation of Manhattan sound bytes that fire Possokhov’s wide-lens imagination.

Val Caniparoli, San Francisco Ballet’s undisputed Most Valued Player, celebrates his 50th year with the company, a longevity that invites a double take. No stranger to humor, he has named his piece “Double Stop.” Wanting Zhao partners with Luke Ingham in a sensually evocative pas de deux, accompanied by an onstage cello rendering of the Philip Glass score by Eric Sung. The upper bodies scissor across a horizontal plane, and the partners find their footing across wide swaths offering plenty of space to execute pristine placement of other body parts. Giving plenty of license still allows for discriminating punctuation of quid pro quo partnering. Caniparoli, as an academic student, career dancer, and first rank character choice, has become much in demand as a choreographer-storyteller, his work history fully present and embraced by Zhao and Ingham.

If Bay Area audiences are to fully grasp the social import of the storied full-length ballet “Giselle,” San Francisco Ballet has to some day decide to defer to Alicia Alonso’s elegiac version in lieu of outgoing Artistic Director Helgi Tomasson’s “Pas de Deux from Giselle, Act II.” That noted, this evening’s Second Act mashup of pas de deux and their variations, trains a spotlight on the technical and dramatic achievements of Misa Kuranaga in the title role and Angelo Greco as her Albrecht. Kuranaga dances her apprentice Wili unwilling to relinquish her heart as a condition of membership in the staunch but embittered cohort of virgin brides who die too soon. Her bounding jumps and manicured adage announce her qualifications. Moreover, in Greco’s interpretation, we feel his engagement with each stark regret arrived too late, and each terrifying premonition as it introduces itself to him. He stays with these intrusions until the next one arrives to hunt and haunt him.

Christopher Wheeldon’s “Pas de Deux from Cinderella, Act II,” to music (again!) by Prokofiev, benefits from the convivial partnering of Sasha De Sola in with a dashing Joseph Walsh, two perfectionists appropriately cast as Royalty Without Portfolio. As Alicia Alonso’s longstanding partner Jorge Esquivel once said of Fernando Alonso, “The King doesn’t have to wear a crown to be the King,” an apt précis of the Wheeldon version controlling argument.

Former San Francisco Ballet Principal Nicolas Blanc returns as the choreographer of “Excerpt from Gateway to the Sun,” a back-to-the-earth study danced by Max Cauthorn, Jennifer Stahl, and Luke Ingham, against an arresting yet simple mountain landscape designed by Katrin Schnabl. The earthy intelligence of the work reaches its fullest expression in the dancers’ enchanting port de bras, and attention by Blanc to the details of head inclination and placement.

Justifiably high expectations for a work by William Forsythe went unmet in “The Colour in Anything.” In an elsewhere absent flourish of irony in the evening’s program, this work waned colorless against the female vocalist’s profound efforts to fulfill the title’s contract (music by James Blake), and Nishiko Fogo’s and Isaac Hernández’s giving their all to make it look better on stage than what Forsythe may have provisioned them with in the studio.

“Bolero,” Yuko Oishi’s work to Maurice Ravel’s piece, the program’s closer, is a spectacular contribution to the pledge of company excellence. It is unlike Maurice Béjart’s version, which he set on Soviet étoile Maya Plisetskaya. Béjart has her building a stand-alone profile of the composition’s crescendos in a progressive but linear tracing, encircled by corps members, below stage, who repeat her steps. Oishi takes a geometric approach, beginning with 1, then adding 2, then 4, until the factorial at work folds in all the dancers. With each addition, the piece rises and deepens a bit more. The dancers move from the elemental armature of the music into its interstices. It then grows and broadens to tap into a rich elixir gurgling beneath the layered surface. To conceptualize such a work requires a visionary choreographer with a sensitive ear, and the instinct and confidence to throw in with a scrupulous yet unpredictable expeditionary adventure. To leave an imprint of hope facing down angst about the future, Oishi draws on Jun Nishida’s and Hiroki Inokuchi’s projection designs. Their point of departure looks ambitious: they screen glimpses from a fabulist universe, seductively camouflaging its undischarged potential. Will it fall into step with the music’s upbeat notes, or the rumbling, troubling undertones? Wona Park, Joseph Walsh, Julia Rowe, Esteban Hernández, Sasha mukhamedov, and Daniel Deivison-Oliveira, with all ranks on board bringing their A-game, lead us to the precipice. Ready or not, here we come.

“Transverse Orientation: Keeping a fixed angle on a distant source of light for orientation.”–Like moths to a flame             Transverse...
DanceTheater