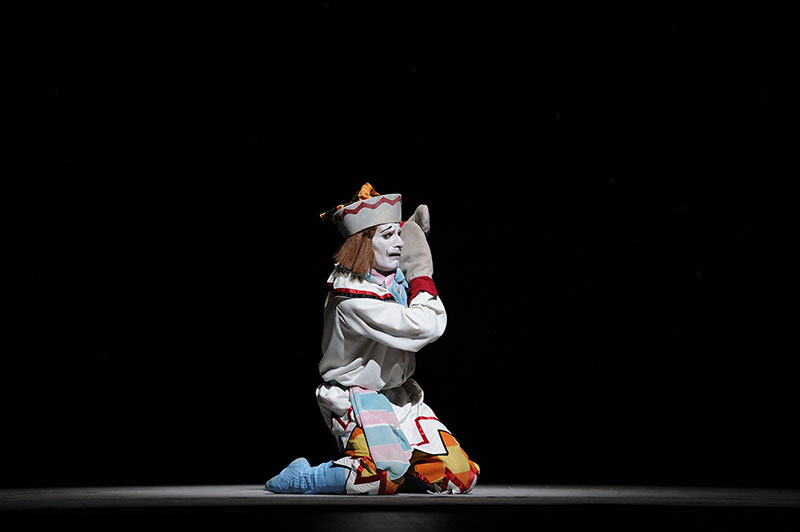 Time has a way of softening sensation, so it’s understandable that “Petrouchka” looks and sounds less avant-garde nearly 100 years after its Paris premiere. But watching San Francisco Ballet’s own premiere of “Petrouchka,” you’d be hard-pressed to find anything revolutionary in the story of a puppet who comes to life not with a kiss but for the lack of one.

Igor Stravinsky’s pleasingly dissonant score (played with brio by an orchestra that has rarely sounded as powerful and spirited, under Martin West’s increasingly propitious direction), stirs as ever with its hammered rhythms, bitonal chords, and unsentimental melodies depicting the lovelorn title character. And the re-creations of Alexandre Benois’ scenery and costumes (by way of the Birmingham Royal Ballet) add a vibrant theatricality to the Benois/Stravinsky libretto of a brutally unrequited love, intended as a “total work of art,” according to the standards of the day.

Yet, “Petrouchka” is a ballet, so it ultimately has to depend on movement for its expressive force, and this is where the San Francisco production disappoints. Although Michel Fokine, the originator of the iconic choreography, wanted the story of a sad puppet who falls in love with a ballerina doll to symbolize the suffering poet, very little in this version (restaged by Fokine’s granddaughter, Isabelle Fokine) summons poetry. The slavish re-creation of steps and gestures and tableaux from the original (which has apparently become Ms. Fokine’s raison d’être), comes off as soulless, in a most un-Russian way.

Pascal Molat dances the role of the hapless Petrouchka competently, if somewhat mechanically (which may be intentional; he is playing a puppet). Molat, a Parisian, also gives his rendition occasional Pierrot-like touches, like the slumped shoulders and droopy arms of the stock character from commedia dell’arte (also appropriate, given the ballet’s antecedents). But he never fully inhabits the role and appears for the most part disengaged, as if he were merely ticking off the various bits of stage business to show the audience that he’s lovesick for the Ballerina. A pity, because this dynamic dancer is capable of so much more than floppy sign language.

Corps member Brett Bauer, his face painted azure (guess why?) for the role of the Moor, looks more like a stray who wandered in from Blue Man Group. His characterization is similarly unnuanced; he plays it with broad strokes, and when he slashes at a coconut with his scimitar, the emotion conveyed isn’t so much pent-up rage as childish wantonness. There is nothing sexual in his mien, no hint of what delights he could offer to captivate the Ballerina. That she goes for him and not Petrouchka thus has no context, especially in so patently arch a production as this.

Clara Blanco, another promising member of the corps, effectively performs the requisite fouettés and pas de bourrée as the Ballerina, a blank look frozen on her face (as befits a doll). But her moments of  liberation—notably when she flees Petrouchka’s grim cell—lack motivation, and she adds nothing in her by-the-book interpretation. Other cast members range from fine (Frances Chung as a street dancer, ably stepping into her pointe work) to embarrassing (Quinn Wharton as a wealthy merchant, his joviality as bogus as his obviously padded paunch). The crowd scenes that open and close the ballet have an unnaturally sluggish pace as well; the packed stage is clotted with dancers moving stiffly from side to side with nowhere to turn, executing their squat kicks and pas de trois cautiously, as if they might hurt someone if they accidentally got too exuberant.

That aura of caution holds this “Petrouchka” back like a security cordon around an exhibit of imperial porcelain tea sets. The resulting production seems just that—more a “produced” spectacle than a fully imagined dance. As with most reconstructed ballets, this one has the look of a quaint, historically accurate pageant, with too much pantomime standing in for expressiveness. The distinctly dispassionate impression it leaves is not unlike the yawn one stifles after seeing too many cups and saucers and not enough art.

It was thus a relief to watch the remaining two dances of Program 4, both works from the rep. Yuri Possokhov’s “Diving Into the Lilacs,” returning after last year’s premiere, actually looks—and feels—much lighter and fresh. We’ve by now forgotten Possokhov’s explanation that he was trying to evoke the subtle fragrance of the springtime blooms. Who cares? What matters is that he choreographed some lovely moves to a pleasing “Sinfonietta for String Orchestra” (by the Soviet-era composer Boris Tchaikovsky, no relation to Pyotr). That newfound ease is often the case with these sort of pieces; they grow on the company in the months after their debut, when the dancers can absorb what, exactly, the choreographer had in mind and then bring it to life. Possokhov, still struggling to find himself as a dance-maker after a long run as one of San Francisco Ballet’s most charismatic principals, drew on his Moscow roots in making this simple, sweet piece that elicits spring in four movements. Barring some revelation in Program 7 (when we’ll see his latest, “Classical Symphony,” set to Prokofiev), this may be his best work yet. Molat renews his reputation as the company’s most sinuous and athletically accomplished principal, providing meltingly fluid partnering to Maria Kochetkova, who rises to the occasion by at last succumbing to the music rather than her own idiosyncratic mannerisms (the tempi are too fast for her to exaggerate her extensions here). Anthony Spaulding and Yuan Yuan Tan likewise have some lovely moments in their pas de deux, with Tan perfectly executing the titular “dive.”

William Forsythe’s “in the middle, somewhat elevated” closed the program. The piece has an incessant, breathtaking quality that leaves the company (and audience) panting at the end. Principal Sofiane Sylve (a New York City Ballet alum) literally gives her all; in her pas de deux (with Tiit Helimets), she unfolds her lithe legs in such perfect angles that you wonder if she’s in pain. Many other cast members get to show off, too—Gennadi Nedvigin struts about, looking in top form after a year off (recovering from injury), and Davit Karapetyan finds his mojo in the ostentatious, thigh-flexing solos he gets. But the two decades since it premiered have not been kind to Forsythe and the techno-harsh music (by Thom Willems) to which all the neck-twisting, torso-grinding choreography plays out. (Multiple viewings can dull its edge, too.) Though its urgent, percussive quality makes for some striking pairings with an undercurrent of aggressive eroticism, the piece begins not only to sound but also look repetitive about halfway through; it could stand to lose about five minutes. At this length, you’re expecting Janet Jackson to come skipping in to show the company a few new moves from a marathon video. Sexy and intriguing and unclassifiable though it may at times be, “in the middle” is showing its age, even as its youthful dancers defy its origins from a generation past.

(27498)
$0.59 (as of January 24, 2021 - More infoProduct prices and availability are accurate as of the date/time indicated and are subject to change. Any price and availability information displayed on [relevant Amazon Site(s), as applicable] at the time of purchase will apply to the purchase of this product.)

(9724)
$4.50 (as of January 24, 2021 - More infoProduct prices and availability are accurate as of the date/time indicated and are subject to change. Any price and availability information displayed on [relevant Amazon Site(s), as applicable] at the time of purchase will apply to the purchase of this product.)

(9704)
$2.84 (as of January 24, 2021 - More infoProduct prices and availability are accurate as of the date/time indicated and are subject to change. Any price and availability information displayed on [relevant Amazon Site(s), as applicable] at the time of purchase will apply to the purchase of this product.)
related posts