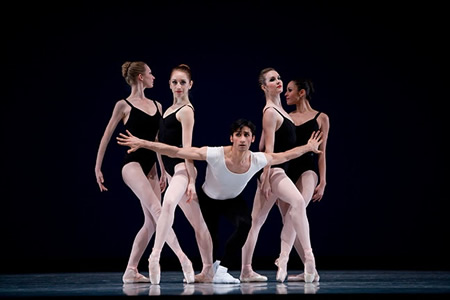 Mixed repertory: “Prism” by Helgi Tomasson, “Diving Into the Lilacs” (world premiere) by Yuri Possokhov, and “The Four Temperaments” by George Balanchine.

Can a dance be made from a fragrance? Yuri Possokhov poses that question in his latest work, and while he may not have answered it completely, the San Francisco Ballet’s choreographer in residence puts forth a number of theories with “Diving Into the Lilacs,” given its world premiere on opening night of Program 1.

It’s a curious piece, by turns lovely, provocative, and confusing. Possokhov has set out to evoke the scent of blooming lilacs—or at least the memory of them and, in turn, the affiliated emotions—from his days at the Moscow Ballet School. What starts as a somber exploration of a chill, shadowy landscape ends with a fairly jubilant outcome: the blossoming of the purple flowers. This darkness-into-light, winter-into-spring motif might have amounted to little more than a cliché (and it sometimes veers close to that, especially with Benjamin Pierce’s flower-heavy projection telegraphing moods, from dusky to dazzling), but Possokhov rescues the work from his own sentimentality about the subject while offering some thoughtful movement to contemplate.

Working from Boris Tchaikovsky’s listenable (if somewhat thin) “Sinfonietta for String Orchestra,” Possokhov lays out his case with seven couples in the work’s four movements. In the sonatina, a number of prone, black-clad bodies writhe and twitch, suggesting some nascent force—roots, perhaps, or worms—as others kneel in a sober, ritualistic circle about them. In the waltz, men in dark tunics twirl about, occasionally touching and interacting with the women, many of whom appear in pastel violet skirts—forecasting a thaw, and its portent of new life and love. Then, in the variations, three couples perform a series of pas de deux that range from flirtatious to tragically romantic to untroubled-in-love. The concluding rondo expresses lilacs in full bloom, with ebullient lifts and unbridled zipping across the stage, suggesting that familiar rite of spring, ecstacy.

But for all the earnestness of the dancers and the choreographer, “Diving Into the Lilacs” doesn’t quite respond to the questions it presents. Are we to assume that love arrives only in springtime, when the flowers say so? With their change from black leotards to petal-like white and violet dress, it’s clear that the women here represent the transformative power of spring, but don’t the men, dressed always in the same dark tunics and given heavy-handed gestures, participate in the metamorphosis as well? And what is it about the flowery perfume that tempts one to physically dive in? Possokhov has characterized this work, his third since assuming full-time choreographer duties, as “completely personal”—which sounds as if he hasn’t quite figured out how to convey his ideas, really (a problem that dogged his earlier works such as the gimmicky “Reflections” and “Ballet Mori”). As with most such impressionistic dances, the feelings lack logic, and in the end they fade as soon as the music is over—as fleeting as the gentle fragrance of lilacs (which, to be fair, may be Possokhov’s intention after all).

In “Prism,” set to Beethoven’s Piano Concerto No. 1 in C major, Tomasson offers up a pleasantly proportioned and intellectually satisfying ballet that looks as if it might have come direct from New York City Ballet (on whom Tomasson set the work in 2000 as a kind of tribute to the company that nurtured him for 15 years). In the first movement of this warmly lit (Mark Stanley) and classically costumed (Martin Pakledinaz) work, principal Kristin Long embodies what is right and beautiful about the company: she’s technically precise, musical, and full of gracious, smiling exuberance. Likewise, Sofiane Sylve lends a fluid nimbleness to the second movement, and newcomer Taras Domitro offers breathtaking big leaps to the third movement as the majordomo (the piece encapsulates the art of making dance, and especially the choreographer’s role in bringing it all together). Only a somewhat overeager soloist Hansuke Yamamoto, one of two men who partner Long (the other is the smooth Ruben Martin), appears to anticipate his movements; he needs to heed Balanchine’s advice—don’t think, do.

Balanchine would have no such complaints about this company’s rendition of “The Four Temperaments,” his seminal work from 1946 that reconfigured classical ballet in contemporary terms. Staged here by Elyse Borne of the George Balanchine Trust, the piece perfectly captures the hip-thrusting, high-kicking, lunging angularity intended by the choreography, set to Paul Hindemith’s “Theme With Four Variations (according to the four temperaments).” Though the ensemble performs brilliantly throughout the difficult composition, standout soloists as the four “humors” include Pascal Molat (who exhibits a dignified suffering in the Melancholic variation) and Sarah Van Patten (whose sinuous lines made for a stunning show in Sanguinic). The company’s agility in conveying the spirit of the dance—moody, austere, stately, and exuberant—bodes well for the evening-length presentation of Balanchine’s “Jewels” later this season. We have much to anticipate.