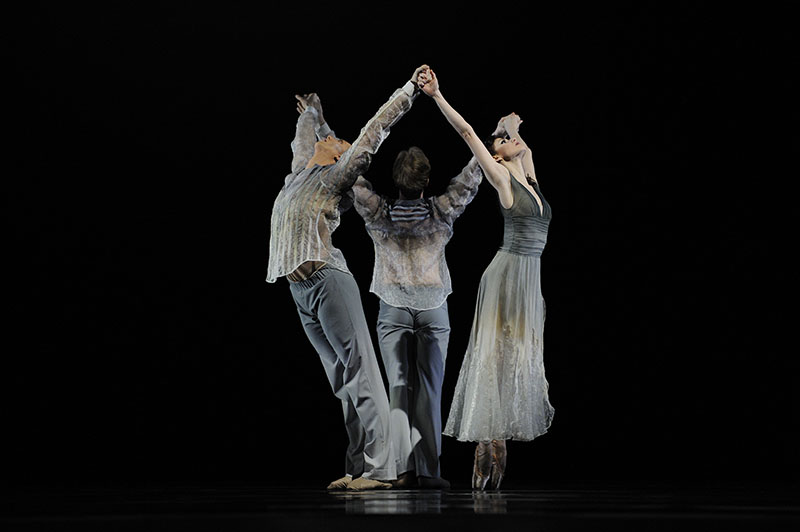 Is it possible that in the long-haul of a ballet season, where dancers are rehearsing by day and performing by night, there can be moments—no—whole programs—where the level of excitement and physical attack are simply low?

After a couple weeks of Swan Lake, and with 11 more ballets to go, including a new evening length premiere (The Little Mermaid), along with tough ballets by  William Forythe, a new ballet to atonal Schoenberg music by Renato Zanella, and Romeo and Juliet to get ready for, Programs 2 & 3, had an overall sense of lackluster.

In the all-Balanchine program 3, “Serenade” (1935), the earliest of the Balanchine ballets on display, shone, almost on its own. It is one of the most beautiful, breathtakingly imagistic  pieces of choreography that ever changed ballet. The opening notes of the familiar Tchaikovsky “Serenade for Strings”, with 17 ballerinas spread-out across the stage all standing in closed first position with one diagonally reaching arm, before opening on the music into classical turn-out and meltingly rounded arms, is unforgettable.

Here, the Corps seemed to add love to the steps—perhaps they are all romantics. Even the often-overly dramatic Lorena Feijoo softened her persona and matched Sofiana Sylve’s French loveliness. Although men are a definite afterthought in this feminine world, Tiit Helimets and the young Brett Bauer melded well into the romanticism.

“Stravinsky Violin Concerto” (1972) was another story. Here, the principals, Sylve with Pierre-François Vilanoba and Yuan Yuan Tan partnered by the over-his-head corps dancer Anthony Spaulding, never managed to attack the strange bug shapes of the choeography in order to create indelible images, which the Stravinsky, all strident and striking, called for. It was the same with the orchestra. They were  like grandparents trying to Krump.

In the Program Notes, company director Helgi Tomasson (who danced for Balanchine at New York City Ballet not that many moons ago) said that he keeps the Balanchine rep front and center in the San Francisco repertoire in order to keep the company’s technique up-to-snuff. Unfortunately, in this piece, things looked fuzzy. Only a quartet of solo-hungry young men managed to create impact—they were exciting.

“Theme & Variations” (1947), a tu-tu/tiara ballet, with its big chorus and technical challenges, was a much better fit for the company because the music is easier to dance to. For a group that programs lots of contemporary ballet, they always seem to breathe easier and really dance when things get classical and pretty. Still-—beyond the well-matched partnering of Vanessa Zahorian and Davit Karapetyan, all the pageantry and patterns came across as puzzle parts more than inspired brilliance. Maybe it was just too much Tchaikovsky for one evening.

Program 2— wrapped around a World Premiere by Christopher Wheeldon—was a curious blend of ghosts and other supernatural suggestions, without a hint of 19th Century, story-ballet hokum.

Wheeldon, who walked away from the best job in the world—as Jerome Robbins’ replacement at New York City Ballet to start his own, much smaller-scale repertory company, Morphoses, recently seen in San Francisco for the first time (http://Culturevulture.net/index.php?option=com_content&view=article&id=179:morphosesthe-wheeldon-company&catid=4:dance&Itemid=4), has been trashed lately, as any artist (even Balanchine) tauted as ballet’s 2nd coming would undoubtedly be. Does anyone, really, care what Alistair Macauley thinks anyway?

Still, as seen in his new piece, “Ghosts”, Wheeldon is unafraid of continuing to grow as an artist by taking risks, both musically and kinesthetically. The original score for “Ghosts” written for the piece by C.F. Kip Winger, is more about “a mass gathering of souls—as there might be after a tragedy”, than literally about ghosts. It evokes atmosphere more than a Willi-like corps of ghouls. However, the scenic piece, by Laura Jellinek, the suggestion of broken building parts continually (and softly) falling, offers more than a slight suggestion of the wreckage of  9/11.

The ghosts here, lead by Sofiane Sylve, Brett Bauer and Tiit Helimets, along with a duet for Yuan Yuan Tan and Victor Luiz, offered many interesting movement themes, one, repeated throughout, has the ballerina flying with outstretched arms, along with winged feet that touch down in flight like living statues of Mercury. There is yearning here, a blue-lit night not unlike the set for “Serenade” and group cross-overs that continually fill the space with horizontal movement. A Wheeldon trademark, the primacy of the pair, in groups as well as pas de deux, is still central to his choreographic impulse.

Dynamically, Wheeldon adds strength, quickness and sharpness to movement in contrast to a nearly achingly lyrical score. Other moments meld into something of a resolution—souls at rest. This is a complex and original piece of work worth several more viewings.

Jerome Robbins apparently kept voluminous records of his dreams, and, indeed, there is a central male figure in his 1979 work, “Opus 19/The Dreamer”. Set to Prokoviev’s Violin Concert No. 1 in D Major (Op. 19), the piece, like Wheeldon’s new dance, uses the chorus to explore consciousness as much as classicism and design. Robbins’ use of jazzy edges and modern dance “release” added modernity to the ballet vocabulary—but mostly it was the very un-Balanchinian use of the corps that gave the piece its greatest originality.

Tara Domitro, the man, and Maria Kochetkova, as the unobtainable woman —look like dancers  out of a hippy 70’s Joffrey Ballet production—all “modern” and stripped-down. Where Balanchine would have focused on the movement, Robbins seems  more interested in the atmosphere created. Moody lighting by “Jennifer Tipton after Ronald Bates, recreated by Les Dickert” helped.

Paul Taylor’s Andrews Sister classic, “Company B”, competed the second program, with its own set of ghosts. WWII soldiers are much more obviously fighting, dancing, dying and playing here, although, interestingly enough, according to Program Notes, it was AIDS, not war, on the choreographer’s mind as the piece was being created, in 1991.

Whatever it is being explored, the dance is a crowd-pleaser–still—and a chance for Tomasson to offer various corps members chances to get out of formation, hit center stage, and bop.