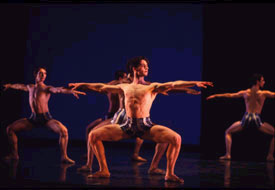 Three living American choreographers worked directly with the brilliant, versatile dancers of the San Francisco Ballet to create a program of dances that offer contrastingmusic, movement styles, costuming and intent. The steps may have been classically based, but Yuri Possokhov, Helgi Tomasson, and Stanton Welcheach played with the form in order to achieve different goals.

Possokhov’s world premiere, Study in Motion, offered a motif of sliding. The revival of Tomasson’s 1992 take on Vivaldi’s Four Seasons took a score that has achieved Muzak-familiarity and still managed to come up with surprises. Finally, Stanton Welch’s 2003 Tu Tu made Ravel’s lush then strident Piano Concerto in G seem like performance art.

Possokhov (Magrittomania, Damned), who had ten years of Bolshoi experience before coming to San Francisco to dance and explore a career as a choreographer, has moved into a differentrealmwith his new piece. Leaving aside every shred of theme in order to explore pure movement, he has created a stunning work. The cast, four couples chosen from the top ranks of the company,had an easy, familial cohesion, flowing in and out of solo work, strikingly creative partnering andbeautifully unified group passages. The stage was at once opened and closed, with filmy curtains creating a contained playing space behind which the wings were removed and backstage areas revealed. A haunting, austere tone was set by the early twentieth century piano music, an all-Scriabin playlist including sonatas, preludes, and other short pieces played by Michael McGraw. Possokhov dedicated the piece to the dancers, all of them friends, but it was clear by the conviction and clarity of the movement, that the dancers, Lorena Feijoo,Nicolas Blanc, Yuan Yuan Tan, Damian Smith, Kristin Long, Pascal Molat, Katita Waldo and Peter Brandenhoff, were dedicated to him.

An entirely different note was hit by Helgi Tommason, whose Le Quattro Stagionihad softness and simplicity, mild weather despite the musicalchange in seasons. Set in a pastoral Italian background and Edwardian-looking skirts, vests and hats, the dancers offered a kind of barefoot, Isadora Duncan quality,even in their toe shoes and white tights. Tommason showedopen-space and stillness,created lovely images, and made an interesting choice by depicting “Winter” as an all-male affair. As a native of Iceland, he must be an authority on that particular season,and the men, who moved from huddling mass to brotherly lines of folk dancers to spectacular synchronized fouette turns, seemed to indicate that there’s a lot more to the coldest months than Californians may realize.

Tu Tu,which premiered last May,was bigger and brattier than the other pieces on the program. Ravel’sorchestration offered saxophone brassiness as well as some highly romantic passages that seemed made for pas de deux.The company looked uniformly full of power and passion in this quirky, athletic work.Roy Bogas was the able pianist and conductor Andrew Mogrelia kept the orchestra bright and quick.