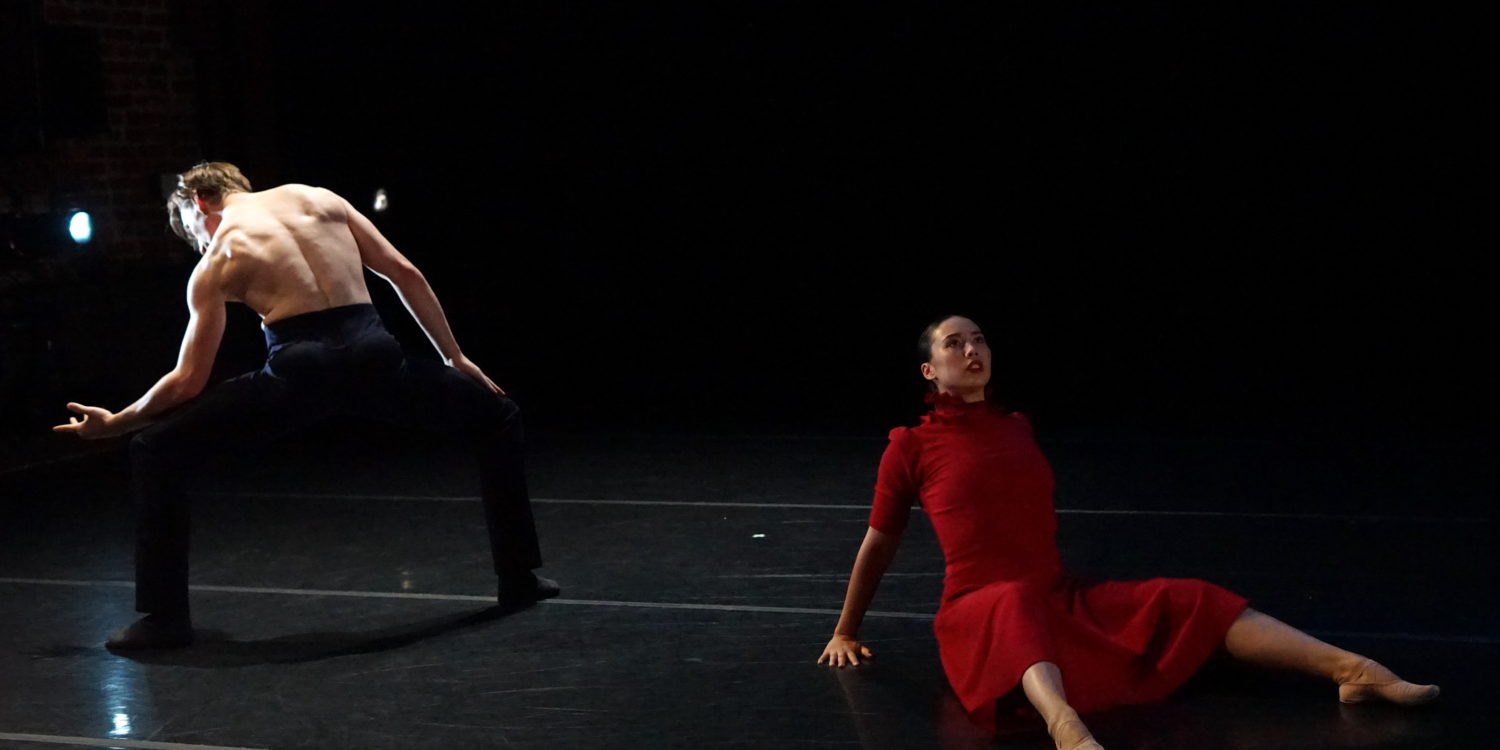 For five seasons, SFDanceworks, a repertory dance company, has lived up to its mission; bringing world-class choreography that includes the “past, present and future of contemporary dance.” And each season, the 13-member troupe with its stellar programing continues to grow, even though SFDanceworks began with a very high bar. Season Five maintains this caliber, after being stopped two years ago by COVID, introducing three world premieres by, respectively, Dani Rowe, Laura O’Malley, and Babatunji Johnson. Two west coast premieres were presented by the heralded Yin Yue and the prestigious Edward Clug. And danced smack in the middle was a revival of Martha Graham’s dramatic “Deep Song,”. What’s not to like about a gifted principal ballerina, Dore André, fiercely dancing with a bench…?

André carries off this historical dance with the skill of a matador, costumed in the same floor-length black and white pleated dress that Graham forcefully kicked out of her way to create her statuesque moves. Henry Cowell’s syncopated score accented each step, adding to the theatrical spectacle. “Deep Song” was the only dance incorporating a prop or standout costuming, with the rest of the dances confidently relying on the barebones of movement–the force of gripping music, subtle wardrobe, and simple unfiltered lighting.

The captivating Babatunji Johnson performed in his own work, “Began Again,” presenting a sampling of different dance styles and duos through snippets and blackouts with music abruptly ending to distinguish segments. “Began Again” included everything from joint articulating street dancing to complex modern coupling. The piece was the most exhilarating when the ensemble of four united, which was also when the fluid talent of Stella Jacobs was most noticeable.

“Within Where”—by Laura O’Mally—is a haunting, conceptually gripping performance with grainy lighting by Jim French. French divides the stage into diagonal shapes contrasting shadows with light. Three dancers (Amelia Shultz, Matt Wenckowski, and Lani Yamanaka) alternate solos, each dancing within lit portions of the stage as a shadow figure begins to emerge mirroring or lifting them from the unlit area behind them. The shadow figure, Erik Debono, is dressed entirely in black like a stagehand in a Noh Theater production (Laurin Strongen, costumes design.) Once free of this element of surprise and yin/yang contrast, the dance loosens into an endlessly flowing modern dance.

A more traditional duet with Katrina Beckman and Ben Simoens was offered in Dani Rowe’s “Little Scratch.” The dance is tied together with a dramatic score by British composer Joby Talbot, complete with bells ringing and trumpets blasting as the couple’s intricate timing builds in tension. Beckman’s blood-red, three-quarter sleeve, collared dress–reminiscent of the Handmaid’s Tale (Susan Roemer, design) –to Simoens’ shirtless porcelain torso, suggests that tension is in part a sexual dynamic. Especially when witnessing a graphic hand-to-crotch lift of Beckman by Simoens, who then places her on the floor beneath him. He towers over her before walking off the stage leaving Beckman alone with a horrified expression. Although Rowe says, the work is about “what is scratching beneath the skin,” in a world with women’s rights diminished, it is challenging not to interpret this dance through this lens. Rowe vs. Roe?

In a program full of impressive choreography and solid performances, two works stand out; “mutual comfort” by Romanian choreographer Edward Clug and Chinese choreographer Yin Yue’s “Just Above the Surface.” “mutual comfort” was the most innovative, designed askew of center stage, incorporating unpredictable lines and placements to a post-industrial, post-modern score; by Slovenian composer Milko Lazar. To Lazar’s pounding piano, Brooke Corrales, Erik DeBono, Ameilia Shultz, and Ben Simoens move quickly and continuously into lifts with legs running in space or undulating on the floor like a snake shedding its skin. At the same time, head and neck undulations might be the only movement for two stationary dancers in different parts of the stage, holding fast-like sentries that witness and offset the other dancers. It is easy to imagine why NDT2 included “mutual comfort” on their 2019 New York program, as it is designed for that caliber of performance and performers–which SFDanceworks effortlessly, handsomely handled.

“Just Above the Surface” completed the program, utilizing the entire ensemble into a breathtaking wave of twisting lifts and intertwining duets, where a solo becomes a duet, becomes a quadruple, seamlessly becoming the whole cast. Yue’s whirling and hypnotic choreography is constantly adding and subtracting–often simultaneously–pulsating with a percussive, rhythmic score by Michel Banabila, Metamorphoses, Erik Debono, and Rutger Zuydervelt. “Just Above the Surface” is a goosebump-inducing performance that seduces the audience to sway along while hoping that it will never end.