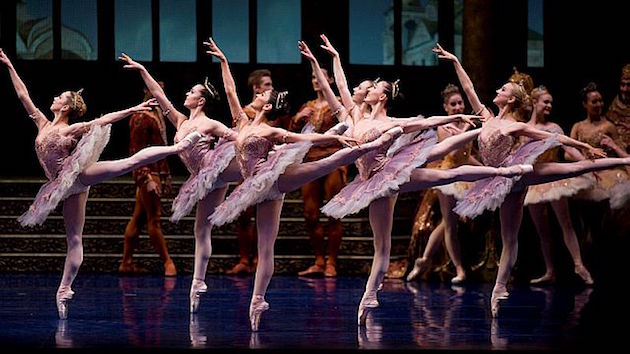 The boisterous opening to the Tchaikovsky Sleeping Beauty overture can invite slices of a dancer’s life to flash before one’s eyes. For at least three generations, elements of this score have been the mainstay accompaniment to many a dance student’s training. As a six-year-old in a tiny studio, I learned balancé en tournant to a scratched recording of the score’s Garland Dance. Later in life, I held my breath during the pregnant pause before an Act III Aurora’s Wedding men’s variation, as one near and dear strode upstage to prepare to dance it. In this year’s San Francisco Ballet revival of the 1990 version, Anita Pasciotti, The Fairy of Darkness (instead of Carabosse), induces chaos presaged by splendid mal’occhio mime. We see not only that art modeled throughout, but the entire academic body of Cecchetti training, detailed in precision turns and magisterial lifts. All of it is laid out in the by-the-book choreography Helgi Tomasson adduces from the Marius Petipa original.

Jens-Jacob Worsaae’s costumes are tributes to sumptuous finery in their design, historically on point in their conception, and exemplary in their craftsmanship. In their subtlety, his sets offer contrast, enabling the dancers to stand out against them. The one ungainly exception is when Aurora’s white tutu is buried by the Nymphs’ fuller pale green dresses in The Vision scene. It’s a chaotic moment where, if you didn’t know the story, or enjoyed too much wine with dinner, you could lose sight of the turning point and dénouement. Apart from that, we see authentic Russian attire supplanted one hundred years later by the wigs and ornate flourishes characteristic of the French court.

Sasha De Sola moved to the front of the class in a powerful portrayal of Aurora, coloring her interpretation with hues of both dash and restraint. Her Rose Adagio balances were surprisingly brief, yet in all the important ways, she shared the magic of the gifts bestowed upon Aurora by a bevy of fairies, outstanding among them, Elizabeth Powell as Silver Fairy, and Jahna Frantziskonis as Sapphire Fairy. I look forward to seeing Frantziskonis dance Lilac Fairy and Aurora in the not-to-distant future. Given a choice, this viewer prefers abbreviated balances and cultivated theatricality, to held balances, where distinguishing princess attributes go missing because the dancer is consumed with locking her psoas and knees.

As Prince Desiré, Carlo Di Lanno faced his first interpretive challenge: giving dimension to a character who is drawn as little more than a lone wolf expediter. Di Lanno’s technical performance was impeccable, but until he marries we don’t learn who this prince is and what he saw in this Sleeping Beauty that prompted the plot-turning awakening kiss and marriage proposal. Others in the cast with smaller roles succeeded in drawing us closer to his character: I am thinking in particular of the recently-returned Madison Keesler as The Countess. Dores André and Wei Wang in the Bluebird variation, less than a week after performing it at the gala, admirably left angst in the wings this time out, and with the bolstering surround of Worsaee’s sets, established a sense of place to take off from in their flight. Wanting Zhao (Puss) and Sean Orza (Boots) entertained us with her jumping undetected onto his back while he, summoning his inner predator, makes a show of smoking her out. Once discovered, she makes every possible feline bid for his attentions, while he rehearses . . . and rehearses . . . and rehearses yet again, how to pounce. He finally musters his nerve as the divertissement ends, and they exit á deux. Sadly, there was no Red Riding Hood and Wolf. They were missed. (Hopefully, they won’t show up resentfully bearing a state-of-the art pricking device when “Beauty” is reborn a century from now.)

The Grand Pas de Deux was nothing short of masterful, with De Sola finding as salient a balance in arabesque as in sou-sou, and having warmed up to his prince role, Di Lanno virtually skimming through his opening glissades to reach for that triumphant assemblé. Their timing and élan was tachycardia-inducing.

In the context of Me Too and Time’s Up, and surely more to come about the abuse of power when an art form is rendered a commodity, this 1990 revisit reads strangely matriarchal. Both protagonist and antagonist are women. The Lilac Fairy (Sarah Van Patten) who stewards Aurora back to life, is a woman possessed of overarching yet benevolent powers. The women’s corps de ballet finesses transitions seamlessly from one scene to the next. Bravas rightly belong to the Level Three student girls who hold their poses with poise uncommon to those their age. All this occurs in the context of classicism, not the radicalism of the contemporary or modern dance genre. At a reading where I presented my first book on the subject of international ballet artists, a woman tap dance artist asked me why it was, considering that I identified so fully with the protest movements of the 1960s, that ballet that had won my heart “over” modern dance. Seeing last night’s production now provides a better answer than I offered her. For me, the classical golden mean can only be fully realized for all when distinctions of social class and the related oppression of women and national minorities end. With that finale comes an end to the privileges historically parried as abuses of power. Then, even more than now, all forms of dance and all the social strata that have danced them, can benefit from the classical oeuvre and the preparation it begs for. As long as ballet belongs only to the royal court or its bourgeois successors, its artistic reach will never exceed the social limits of its grasp. “Radical” ripostes that sometimes assume a modern or contemporary form in dance can arrive seriously flawed by the conceit that the protest message in itself suffices as art. What counts is not the form art takes, but who’s driving. In this regard, the medium is decidedly not the message.

In The Sleeping Beauty’s awakening last evening, Sasha De Sola, and the women in her dominion, made the case for women-as good, bad, or indifferent characters-finding agency in lives that exceed the socially-determined limits of the characters they dance. Let them also awaken a dignity respected in the art form that they not only sustain but enlighten, thanks to their struggles as women artists.