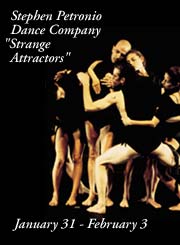 Not so long ago Stephen Petronio was the &#147;bad boy&#148; of modern dance, delighting in exploring extremes. His costume designers were ahead of the avant garde, dressing men in corsets and such. The music sensibility was similar. The movement was explosive, frenetic. As his current engagement under the auspices of San Francisco Performances shows, he is maturing without losing his inventiveness. The edginess is controlled, and his dances are constructed more cohesively.

For the past several years the Stephen Petronio Company has enjoyed a special relationship with San Francisco Performances, becoming their first artists-in-residence, conducting workshops and presenting performances at the Yerba Buena Center for the Arts. This year&#146;s visit features the completed work, Strange Attractors. Part I received its world premiere in San Francisco in 1999; the work was completed in 2000 and shown at New York&#146;s Joyce Theater.

Strange Attractors, inspired by chaos theory, is in two parts preceded by a brief Prelude. The cogent Prelude states some of Petronio&#146;s thematic material. The dancers (four men and four women with Petronio, in his only appearance in the work, roughly in the middle) are close together in a line facing the audience. Gestures dominate this section, as the dancers adhere largely to the linear format. Dressed in black tops and briefs, some with long, tassel-like belts, they lean into one another, occasionally circling around the next person. There are some embraces and self-fondling&#151;hands to chest. At one point the heads go back and several dancers spray a liquid into the air, recalling a whale spewing.

The first part begins with an expansive male solo that establishes the tone of the movement in this portion of the work. Gerald Casel fills the stage with large leaps and turns. He swoops in graceful arcs, a sudden arabesque extending his leg backward. The music by Michael Nyman is Copland-like. The solo is followed by a duet for a man and a woman who perform the same steps coming towards the audience, employing gestures including a clenched fist that then recur throughout the piece. As other dancers are introduced, Petronio first places them in parallel lines, and then breaks the lines. The music, scored for stringed instruments, is lyrical and, at times, wistful. Towards the end of the section, the stage is emptied of movement and one woman begins to dance to the sound of a solo piano. The rest of the dancers return, and the backdrop (cyclorama) is raised to reveal the backstage space.

Just as the first part was peaceful (albeit filled with energy), the second part is intense. This change is reflected in the lighting, which shifts to strong colors on the cyclorama, red and orange predominating. Two silver spheres hang in mid-air, adding reflections. The structure of the dance begins formally, with dancers in two lines, one line circling around the other; then it breaks apart. The movements, which recall the turns and arabesques of the first part, are now filled with punching and kicking motifs. Petronio explores different combinations of dancers and moves, and brings the second part to a swift conclusion.

Every dancer in the company reveals excellent training and a focused commitment to the work being performed. They are Gerald Casel, Thang Dao, Gino Grenek, Ana Gonzalez, Ashleigh Leite, Jimena Paz, Shila Tirabassi, and Todd Williams. Director/dancer Petronio is not one to make over-long dances: he says what he has to say without becoming self-indulgent.