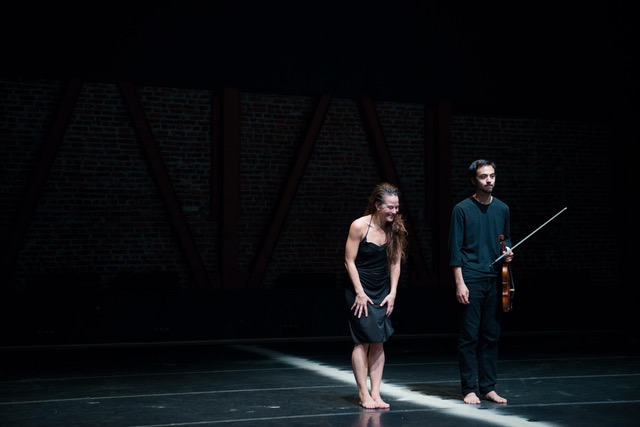 As part of the 37th season of the San Francisco Jewish Film Festival, “A Study of Effort” was presented to coincide with the West Coast Premiere of “Bobbi Jene” — a documentary on Bobbi Jene Smith. In that documentary is the beginning of this solo work by Smith that evolved as she left the prestigious Israeli dance company, Batsheva. “Bobbi Jene” shows the beginning steps of “A Study of Effort” that was originally a six-minute solo. Since then the piece has become an hour-long collaboration and work in progress with virtuoso violinist Keir GoGwilt. Its seven episodes or studies on effort allow these two sizeable talents to orbit around each other like planets held in space by unseen gravitational pulls—Smith gyrates as GoGwilt’s works his violin into a frenzy. The stage is striped–as is Smith herself who often danced naked–to just these two performers and 12 sandbags stacked upstage right. At first they orbit completely independent of each other and even GoGwilt’s music has little to do with Smith’s slow motion balancing moves. He is a drone of sound to her anatomically intelligent and sublime body.

The seven “Efforts” are perfectly varied in length and style, each showcasing Smith’s minimalistic aesthetic, both in choreography and theatricality. This was the first performance where she has not performed with the audience in the round, but instead with bleacher seats to one side. And the first where lighting design was something other than clamp-on-lamps purchased at a hardware store. Smith begins “The effort of lifting” naked, dimly washed in amber side lighting (Jason Dinneen, lighting design) which defused any sense of exhibitionism and made her nudity very natural, integral to the dance. Her capacity as a dancer is so nuanced and her body so glorious that it was a comfortable pleasure to watch her dance in such an intimate setting– juxtaposed to GoGwilt’s nerdy clothed physique that stayed vertical throughout. Smith’s nudity is so matter of fact that what becomes surprising is when she suddenly appears clad in a black slip in the second piece, “The effort of missing.” Equally surprising in the same segment was when she holds one static pose, with her arms in the air, while GoGwilt’s improvised solo played the entire segment. With his back to the audience, he sliced his bow through the air to create a rhythm before plucking and violating his violin with jagged jabs to the strings.

One of the many intense moments in the “Bobbi Jene” documentary is a scene where a naked Smith is simulating masturbation with a sandbag, drenched hair covering her face, as she climaxes vocally. As it true to form for Smith, it is honestly passionate and edgy, even more so on a big screen. “The effort of listening” –the effort that pleasure requires—the self-pleasuring act was much more subdued. Smith upstage softly lit was clad in her black slip as she went through the same exposed display but with less impact as GoGwilt played downstage. While Smith has been increasingly been recognized for her gifts as a dancer, “A Study on Effort” allows her unique vision for dance-theater to blossom. The choreography is intricate, at times butoh-like, slow moving at other moments trembling or shaking, and though everything is being distilled to its essence, is minimal, it is rich in emotional context. During “The effort of surrender” she followed GoGwilt’s violin playing trailing a stream of sand from the sandbag behind him, suggesting some sort of boarder line, music line, or making ones mark in the sand… In this and in the final spellbinding piece, “The effort of taking care” her stark dramatic visuals were reminiscent of those found in the works of Sankai Juku and Nederlands Dans Theater. In that segment Smith, again naked on her back while she held a flexed upper body—with a tiny plant resting on her breasts. GoGwilt now beside her plays sweetly as faint sounds of toning vocals come from both of them, their orbits now more intimate. “A Study on Effort” is effortless to absorb. It is intentionally a work in process that is improvised within an evolving structure and as such will be worth seeing more than once.