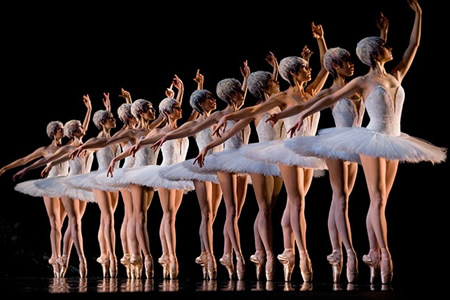 Considered purely as a vehicle for a ballerina, San Francisco Ballet’s new production of “Swan Lake” succeeds spectacularly, particularly with Yuan Yuan Tan as Odette/Odile. From the opening flounces in the prologue (a connect-the-dots addition that has been hyped as controversial) to the reconfigured pas de deux in the final act, the few strategic changes in Artistic Director Helgi Tomasson’s choreography enable a superb principal to bring virtuoso style to her interpretation of one of the canon’s most demanding roles. It requires a prima of flawless technique and exquisite emotional expressiveness. Tan exhibits both, and brilliantly. (She repeats her performance March 1.)

That said, the $3 million remake offers little that would be considered “daring” or move the ballet “to the next stage,” as Tomasson has professed. Instead, it is a more or less traditional production with an updated look—spare, angular sets and jewel-toned costumes (by the London/Broadway designer Jonathan Fensom, a novice to ballet), occasionally glaring lighting by Jennifer Tipton, and often hokey video projections by Sven Ortel (think “Lion King” birds in flight). Set on the polished members of the company, this revised saga of a prince who falls in love with a swan queen nonetheless has a lovely look and some memorable moments, particularly when Tan takes the stage, supported by a corps of swans whose precise ensemble work leaves audiences nodding in appreciation. But Tomasson’s promised romantic payoff never arrives, and when the star-crossed paramours plunge to their deaths, the prevailing sentiment is one of composed finality rather than the tear-inducing tragedy of doomed love.

Part of the problem is in the casting. Tiit Helimets is no stranger to the romantic lead (having danced Albrecht in last season’s “Giselle,” among others). Cast here as Siegfried, he makes for a rather bloodless prince, his pantomime stiff and mannered and his solos constrained by a going-through-the-motions air. He’s blond and handsome enough, though he lacks the verve of a smitten young man. Thoroughly wan in Act I, he regains a bit of passion in his later duets with Odette/Odile. Still, he wears a distracted demeanor most of the time, and it’s hard to believe he’s enamored with Odette (in fact, his listless mien often makes Tan appear to be overacting). When Helimets’s prince dashes off to the moonlit lake after being tricked into betrothing Odile, he seems less intent on finding his true love than in contemplating his own reflection in the water.

Whereas Helimets can be accused of underplaying his role, Damian Smith as the sorcerer Von Rothbart exaggerates to a burlesque extent, failing to nuance his villainy with the requisite lustful desire for Odette. Instead, beginning with the brief, overly literal prologue, we encounter a sneering, leering, Snidely Whiplash caricature. Not that Smith is to blame for the stock gestures and steps he’s given; Tomasson can be faulted here for missing an opportunity to invent some better moves for this one-dimensional devil.

Otherwise, it is impressive to see what Tomasson has produced with his classical company. The aforementioned corps of cygnets, swans, and swan maidens performs with musical fluidity and grace, striking serene poses in perfect counterpoise to the dramatic tale of lost love they enfold. (It’s a pity that Fensom’s swimming-cap headpieces give them a wet Esther Williams aspect, and that his visualization of their watery habitat is a shiny black cliff that looks more like Swan Ridge.) For the most part, Tomasson’s revisions work well: in Act III, the Russian Princesses get a sprightly new dance, and his decision to give Siegfried and Odette a final pas de deux in Act IV underscores their jinxed love. He also grants the other soloists their due—witness Elana Altman, who, as an exuberant Spanish Princess, executes a number of thrilling grands jetés, as well as the gravity-defying new principal Taras Domitro, who, in the Act I pas de trois, matches the lightness of Frances Chung’s and Rachel Viselli’s pas ballonné with his own grandes pirouettes.

Then there is the sublime Yuan Yuan Tan. Her perfectly executed fouettés define the agitated bliss of newfound love, and her regal port de bras telegraphs the dignified way in which she bears the pain of her cruel fate. Even her fluttering head movements convey the delicacy of a fragile creature stricken with betrayal. Taken alone, she is an awesome spectacle, giving the kind of performance that can erase small imperfections in the production overall. In the end, she proves that great dancing is all that matters.

UPDATE: The nine-performance run of "Swan Lake" showcases six different lead pairs. On February 24, Tina LeBlanc danced Odette/Odile and Joan Boada stepped in as Prince Siegfried. The two bring their distinctive styles to the roles: LeBlanc with her straightforward, precise interpretation, and Boada with his vigorous, emotionally engaged approach. They are markedly different from Tan and Helimets (without being polar opposites) and offer proof that Tomasson’s new production will endure for seasons simply because it adapts so readily to different portrayals. Whereas Tan is deliberate and streamlined, LeBlanc is speedy and exuberant (though less regal in her bearing). And Boada, with his outward charm and physicality, presents a more romantic and accessible prince than Helimets. In this light, Tomasson’s stripped-down version of the classic emerges as a unique and flexible addition to the company’s repertoire. (LeBlanc and Boada repeat their performances for the matinee February 28.)