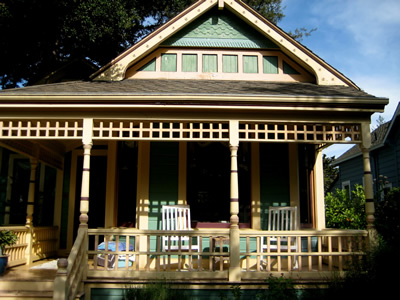 Los Gatos, California, is the home of Netflix and the birthplace of the Pet Rock. John Steinbeck wrote The Grapes of Wrath in the little town of 30,000, Hollywood’s Olivia de Havilland graduated from Los Gatos High School, and Yehudi Menuhin lived in Los Gatos as a child. Currently, the town is home to Apple co-founder Steve Wozniak as well as Olympic gold medalist Peggy Fleming, who, with her husband, owns a winery.

Located at the base of the Santa Cruz Mountains, the town’s vibe—leafy residential neighborhoods, historic buildings—is distinctly low-tech, but its proximity to Silicon Valley hotspots—it’s about 12 miles from the San Jose airport as well as from Mountain View, Sunnyvale, and Santa Clara—makes it a desirable location both for techies working in the area and as a jumping-off place for visitors on business trips. Location, location, location, as they say.

Los Gatos—“the cats”—is not named after neighborhood pussycats but rather after the abundant mountain lions that used to live in the mountains near town. Today, there seem to be more perros (dogs) than gatos, with doggie water dishes provided at many shop doorways, and the town recently renamed “Los Perros for a Day” by Mayor Barbara Spector.

Los Gatos got its start in 1839 with a land grant from the Mexican government to brothers-in-law José Hernandez and Sebastian Peralta. In 1845, James Forbes built a flour mill, the area’s first commercial structure, on the banks of Los Gatos Creek. The current History Museum stands in that spot. In 1887, Los Gatos was incorporated.

The town was a center for lumbering, as the trees on the mountains were cut to built the city of San Francisco. In the valley, fruit and almond orchards were planted. The world’s largest prune orchard was located halfway between Los Gatos and nearby Saratoga; apricots, cherries, peaches, and scores of other fruits also thrived. Fruit drying and canning gave employment to many citizens. A toll road, and, in 1878, the railroad, the latter built largely with Chinese labor, ran through the town, connecting San Jose inland to Santa Cruz on the coast and transporting the lumber and fruit products.

Trees have grown back on the mountains, and wineries as well as houses have replaced most of the fruit orchards; but relics of those 19th-century days linger. The Toll House Hotel stands on the site of an actual toll house on the Santa Cruz road. The picturesque Almond Grove neighborhood, near Nicholson, Bean, and Tait Avenues and dotted with tidy Victorian cottages, is on the site of—of course—a former almond grove.

The turreted landmark La Cañada block, at the central downtown corner of North Santa Cruz Avenue and West Main Street, was built in 1891. Like many of the town’s historic buildings, it was restored after the 1989 Loma Prieta earthquake, whose epicenter was nearby. According to Sandy Decker, local actress and former mayor, former planning commissioner, former town councilwoman, the quake provided an opportunity for the town to rebuild and restore many structures that had been badly “modernized” in earlier decades. With a new building code and a streamlined building application process, Los Gatos not only revived some of its former glory, but also added modern amenities such as handicap ramps.

Sandy Decker and other town thespians occasionally offer entertaining if not always totally historically accurate Historic Walking Tours. One recent morning, for example, Decker, wearing a turn-of-the-last-century-style gown and cascades of pearls, portrayed the Widow Mary Coggeshall. The real Mary Coggeshall appeared in Los Gatos in the 1880s with two children and no husband and soon became the owner of the magnificent Queen Anne mansion—given to her, “the Widow Mary” tells us, by an admirer. A shameless flirt, “the Widow” warns us not to believe the tales being spread about her by one Mountain Charley, an early settler and rancher. And soon enough we meet Mountain Charley (portrayed by Michael Kane), who relates rousing anecdotes about his encounter with a bear and, indeed, rumors about the Widow Mary’s—er—colorful history. En route, we see the Coggeshall House, now the location of Trevese Restaurant, and other historic buildings. A similar tour, sponsored by The Museums of Los Gatos, will be offered on July 27th. (408.395.7375; http://www.museumsoflosgatos.org/.)

Citizens of Los Gatos are fond and proud of their town—it’s not called a “city”—and rightly so. For one thing, there’s no shortage of things to do. Walkers and bikers can pick up a free copy of the Parks and Trails Map at the library, the Town Hall, and other public places. Shoppers can browse the boutiques along North Santa Cruz and University Avenues, and museum-goers have the History Museum and the Tait Art Museum, which exhibits Northern California artists. Admission to both is free—as is parking in the whole town! Two full-service spas, including the luxurious Spa Los Gatos, offer relaxation.

Special events include the Sunday Farmer’s Market in the Town Plaza and the summertime concert series, Music in the Park on the Town Hall Lawn. Jazz on the Plazz (http://www.jazzontheplazz.com/) takes place on Wednesday evenings from July to September. This year’s lineup includes Mose Allison, Nestor Torres, Claire Martin, Dennis Rowland, and others. The annual summer Los Gatos Shakespeare Festival will present “As You Like It,” “The Tempest,” and the decidedly un-Shakespearean “Beauty and the Beast.” (http://www. lgshakes.org//)

Among Los Gatos’ major attractions is its superb wining and dining. At last count, there were 70 wineries in the mountains between Los Gatos and Santa Cruz. More casual than the better-known Napa and Sonoma wineries, those in Los Gatos specialize in pinot noir varietals. Among the more unusual establishments are Cooper-Garrod, which offers vineyard and winery tours on the first Saturday of every month—and also has a riding stable with pony rides for kids, riding tours, and miles of trails. Cinnabar Vineyards and Winery is operated, as are several other wineries, by a retired Silicon Valley techie, and produces a range of wines including Cabernet Sauvignon, Pinot Noir, Merlot, and Chardonnay.

Fleming Jenkins Vineyards and Winery is owned by Peggy Jenkins and her husband, retired dermatologist Greg Jenkins. Among the wines they produce is Victories Rosé, created to raise funds for breast cancer research and awareness. Two dollars from the proceeds of every bottle goes to breast cancer charities.

Among Los Gatos’s restaurants, perhaps the best known—and probably the most pricy—is Manresa (408.354.4330; http://www.manresarestaurant.com/) described by Zagat as “wow-worthy.” But Manresa has plenty of competition. Among the latest entries is Dio Deka (408.354.7700’ www.diodeca.com) , located in the Hotel Los Gatos. The restaurant’s Greek and Mediterranean cuisine includes elegant takes on familiar dishes such as tzatziki and spanakopita as well as more exotic fare. Fish are imported live from Greece, and the wine list includes a broad selection of Greek wines.

Restaurant James Randall (408.395.4441; http://www.restaurantjamesrandall.com/) located in an old house on North Santa Cruz Avenue, serves classics such as pan-seared halibut and grilled rack of lamb with innovative twists. Trevese Restaurant and Lounge (408.354.5551; http://www.trevese.com/)–the restaurant that now occupies the Coggeshall house—serves six-course tasting menus ($80 per person; $125 with wines) that include such dishes as Duck Press in foie gras bouillon with lentil tuile, and pork cheeks with bulgur-currant salad and pheasant espuma.

More casual fare is available at California Café (408.354.8118; http://www.californiacafe.com/), with small plates, sandwiches, pizzas and pasta as well as exquisite fish and meat dishes prepared by Chef Taylor Boudreaux. For breakfast, follow the locals to the Los Gatos Café (408.354.4647), where the Half-Pound Cinnamon Roll ($3.25) weighs at least a pound, and other dishes are similarly gargantuan. Or try Los Gatos Coffee Roasting (408.354.3263) for first-class coffee concoctions, waffles with fresh berries, and coffees and teas by the pound.

Back in the day, the Los Gatos area’s spectacular springtime blossoms caused the valley to be called “Valley of Heart’s Delight,” and special trolley trips to view the blossoms were introduced in 1910. The blossoms and the trolleys are gone, but there’s still plenty of charm left in Silicon Valley’s little gem.