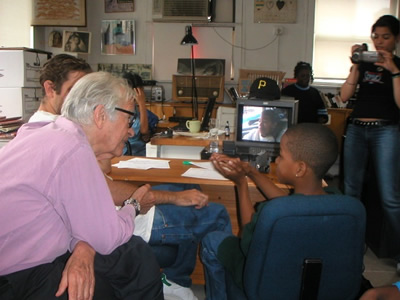 For calendar of events and screenings go to www.mayslesfilms.com

A Documentary Icon Brings His Art (and heart) Uptown:

For the past several months, a new non-profit, cultural institution, destined to be innovative and significant, has been housed unassumingly in an unlikely location. Since May of this year, central Harlem has been the new home to not only legendary documentary filmmaker Albert Maysles, but also his new theater/institute dedicated to the preservation of the Maysles archive and the promotion of new works of documentary excellence.

The 60-seat theater, focused exclusively on the presentation documentary films, is the only one of its kind in New York, as well as the only independent art house cinema in upper Manhattan. For most filmmakers, and even businessmen, this might seem like a daunting task and too risky a venture; for an 80-year-old man who one would assume could just rest on his laurels, or just rest, such an undertaking would be too taxing. But for the seemingly nonchalant, easy going not to mention healthy and vibrant Maysles, it’s a natural next step in a career made up of groundbreaking achievements done on his terms for the greater good of his art and community.

Referred to as the Maysles Brothers, Albert and David (1932-1987) were among the first documentary filmmakers to create a genre now known as non-fiction feature films. Inspired by Truman Capote’s determination and ultimate success to create the non-fiction novel in the form of In Cold Blood, the Maysles carried over a similar philosophy with their critically acclaimed film Salesman. Initially Albert worked with a documentary team that included Richard Leacock and Don Pennebaker making such films as Primary and Yankee No. Soon after that Albert began collaborating on projects with his brother, including their breakthrough film Salesman (1968), the rock classic Gimme Shelter (1970) and cult favorite Grey Gardens (1976) and many, many more.

The New York Times has proclaimed Albert as the “dean of documentary filmmaking”, and he and his brother are credited as being among the early creators of direct cinema. Their films have a distinct style known for allowing the action to unfold before the camera, without scripts, sets, or narration. “I believe documentary at its purest is the greatest value,” declared Maysles during a recent phone conversation. “Documentary films should be factually correct giving viewers enough factual material to make their own informed opinion on the subject matter,” he added.

Maysles Institute and Cinema is a natural extension of this philosophy that the “lives of ordinary people not only deserve, butdemand, our attention.”A big part of what sets the Maysles Cinema experience apart from other theaters is the collaboration with independent filmmakers. The filmmakers are always encouraged to attend the screenings and to promote dialogue with the audience afterwards. Program Coordinator Laura Coxson refers to their website for further details of their goals. “In addition to presenting the masterworks of the documentary tradition, overlooked or under-distributed gems and new releases, we build a space for meaningful social exchange. We offer a forum for the discussion of social, racial and economic justice.”

In the spirit of continuing the tradition of excellence in “truth-telling” through the cultivation of young talent, Maysles Institute is an integral part of the theater and is especially significant to Albert. “Over 50 years ago I had the good fortune and inspiration to relate the lives of individuals through documentary film. Today the mission of the Maysles Institute is to cultivate this same inspiration and talent in others- especially young people- so they may learn to put across their feelings about themselves, their family, and society. Things that are universal but often go unspoken,” declares Albert.

It’s no surprise that Albert and his small staff have hit the ground running in their new neighborhood, with the run of numerous screenings/Q&A sessions and film series having drawn an audience and praise. Maysles says that they were originally drawn to the idea of re-locating the institute and their home Uptown because of the size and value of real estate in the area, but since the move there’s been so much more to appreciate. “There’s more space in Harlem but we also really enjoy being here, there’s a genuine since of community that we love to be apart of and serve.”