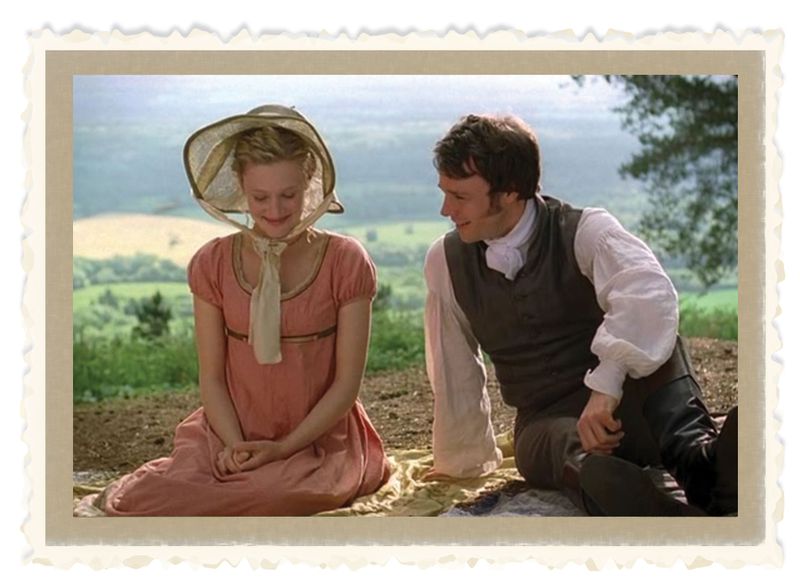 The lively new four-hour production of Jane Austen’s humorous satirical work Emma,starring Romola Garai (Atonement) airs on PBS beginning January 24, 2010. If you are at all an Austen fan, this is a “must see.”

Jane Austen described Emma Woodhouse as “a heroine whom no one but myself will much like.” In actuality, we can’t help liking Emma — a fortunate, amiable and well-intentioned but misguided yenta, with a heart of gold.

Jane Austen’s other heroines are in reduced circumstances and seek a marriage in part for financial support. Emma is the exception; Jane Austen writes, “Emma Woodhouse, handsome, clever, and rich, with a comfortable home and happy disposition seemed to unite some of the best blessings of existence; and had lived nearly twenty-one years in the world with very little to distress or vex her.”

However, Emma’s intelligence and charm are often outweighed by her impetuousness, overconfidence and stubbornness. Nevertheless, she is endearing. As was sometimes said about this author’s father, Emma is often wrong but never in doubt.

Her missteps in matchmaking and her occasional lack of courtesy cause a comedy of errors in the village of Highbury. Having successfully matched her beloved governess, Miss Taylor, with Mr. Weston, Emma is left with her hypochondriac, querulous father (the wonderful Michael Gambon, Cranford, Harry Potter) as her only companion. She proceeds to meddle in the romantic lives of those around her, although Emma plans never to marry.

She tries to find a husband for Harriet Smith (Louise Dylan), a poor but attractive young woman of unknown parentage. Without thought to the difference between Emma and Harriet’s social standings, Emma zeros in on an upper-class candidate for Harriet, an ambitious vicar, instead of the “déclassé “farmer Harriet loves.

Emma also reads too much into her flirtation with the erratic but charming Frank Churchill (Rupert Evans), the newly arrived son of family friends. Without thought, she starts a rumor about poor but lovely Jane Fairfax (Laura Pyper), the niece of two impoverished gentlewomen in the village. As Emma’s fantastic schemes verge out of control, the voice of reason is provided by the gallant Mr. Knightly (Jonny Lee Miller, (Endgame, Eli Stone), the Woodhouse’s constant friend and longtime neighbor.

The ball scene at the Crown Inn is particularly delightful. At first, Mr. Knightly watches from afar as Emma, flushed-cheeked and joyful, relishes in the dancing. Then she prompts Mr. Knightley to invite her to dance, signaling a subtle change in their relationship and foreshadowing Emma’s gentle prompting of Mr. Knightly at the happy conclusion of the story.

Despite Emma’s interference, true love wins outs; a wiser Emma learns that she did not know what was best for others, no less understand her own heart.

Because this production of Emma is so well acted, directed and adapted, and perhaps because it is four hours long, it seems to capture the nuance and subtlety of the novel, as opposed to Masterpiece Classics’ compressed muddled adaptations of Persuasion, Northanger Abbey, and Mansfield Parkthat aired in 2008. http://Culturevulture.net/Television/completejaneausten_1-08.htm

The performances here are outstanding, especially those of Romola Garai, Michael Gambon and Jonny Lee Miller. Garai plays Emma as effervescent and spontaneous. Miller, whose acting I first admired in The Flying Scotsman (2006) http://Culturevulture.net/Movies/flyingscotsman%204-07.htm, has only gotten better. Gambon lets us recognize Mr. Woodhouse’s frailties without faulting him for them.

What a pleasure it is to watch this new production of Emma. Don’t miss it.