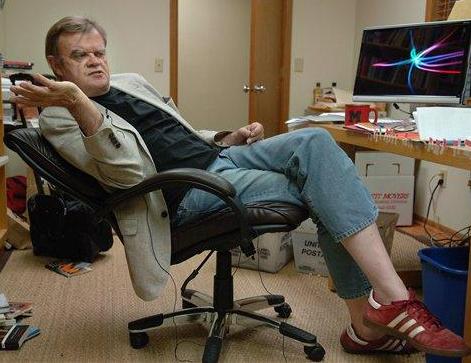 An Evening with Garrison Keillor

Garrison Keillor has become his own cottage industry. Since the first broadcast of his mega-hit radio show “A Prairie Home Companion” back in 1974, the rangy raconteur from Minnesota has gone on to author a shelf-full of books, appear with symphony orchestras across the nation and even star in a movie with Meryl Streep. He has won a Grammy, is published in leading magazines and reads a poem every morning on PBS. And, when he’s not doing all that, he pops up on stages in his own one-man show.

So it was that he loped into Zellerbach Hall in Berkeley, courtesy of Cal Performances, the other night, suit a little rumpled; hair falling over his forehead into his eyes and wearing red socks and sneakers to match his tie. But what the storyteller may lack in sartorial elegance is made up for by his folksy charisma. Actually, he had the audience before he even set foot on the stage as his familiar voice gave the obligatory spiel about the cellphones and finding the nearest exit.

America loves its humorists and, like Mark Twain and Will Rogers before him, Keillor, with his curious combination of folk humor, erudition and caustic charm, is kind of an institution by now. At 69, he’s lucky to have hair to fall into his eyes, come to think of it, and the opening of his show riffed on age and aging. “People start to tell you you’re looking good — which they never did when you actually did.” His observations were interspersed with original, topical and quite funny songs like “Back in the Day.”

But the real heart of the evening lay elsewhere, as, ably assisted by his longtime music arranger Rich Dworsky at the piano and vocalist Heather Masse, who sang beautifully even if she didn’t know all the words, Keillor examined the subject of love. Old love, new love, lost love, false love — they all got a chance. Poetry, anecdotes, and lots of duets with Masse celebrated the tender passion in almost all its forms. No Guy Noir, no cowboys and only one story from the mythical Minnesota town where “all the women are strong, all the men are good looking and all the children are above average.”

But there was a hilarious ode to the sperm and the wonderful tale of the night he was conceived, and if there were a few too many songs and not quite enough stories, well, tough. Minnesotans take what they get and don’t complain. And that’s all the news from Lake Wobegon.