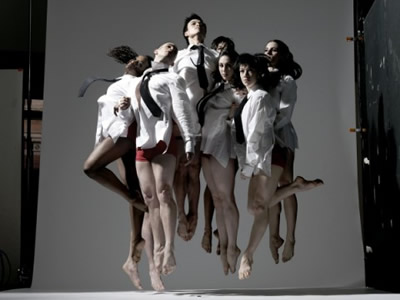 Upon reading the program for the performance by Stephen Petronio Company January 12 at the swanky and newly-opened Institute of Contemporary Art, I thought to myself, “gay, gay, gay!” The entire first half of the program featured Petronio’s dances set to songs by gay composer and singer Rufus Wainwright, some of them settings of text by gay poet Walt Whitman. Not that there’s anything mmm… “wrong” with that. I am gay and without thinking too much about it, I hoped that these dances might speak personally to me, me, me! Isn’t ego a funny thing? The dances certainly spoke to me, but hardly in a political way.

Both “Bud Suite” and “Bloom” are far more than the average gay pride dance, and after watching them I wondered if Petronio had found the Stravinsky to his Balanchine. They are very pure pieces, clean and easy to watch, without sets or props. Tara Subkoff/Imitation of Christ and H. Petal have provided cleverly deconstructed outfits (the opening duet recalls Brassaï’s famous photograph of two men sharing one dress suit) that are very “dancerly.” That is, they don’t obscure the movement in any way.

Choreography to vocal music can be problematic, especially if that music veers towards the pop idiom with its 8-bar phrases, but Petronio’s dense and versatile style was particularly refreshing when paired with Wainwright’s plaintive, powerful vocalizations and harmonies. The choreography is not narrative, and I don’t think Wainwright’s stories need illustrating. Instead, Petronio has continued his development of a highly technical vocabulary. It’s about speed, flexibility (especially in the spine), dramatic partnering, and the challenges inherent in ensemble work. It’s also about the limbs doing things that other limbs usually do (i.e., a “rond de jamb” of the head). Petronio’s choreography has become more and more pared down as he has aged. It’s dramatic without referencing anything in particular.

The program finished with his 1992 “The Rite Part,” an excerpt from a longer dance titled “Full Half Wrong.” I wasn’t as impressed with the piece, which shows less evidence of a personal signature and uses text and music from Mitchell Lager interspersed with Stravinsky’s “Le Sacre.” Fifteen years ago Petronio was still subject to the influence of Michael Clark, perhaps, and now this dance has lost much of the iconoclasm it might have had then.

The Shared Choreographers Concert is offered three times every year at the Dance Complex in Cambridge, always with a different theme coordinating the efforts of young and/or “emerging” choreographers who audition and then workshop their dances with the help of several mentors. The resulting performances are often the place to spot rising stars in the local scene, and sometimes the only venue allowing for considerable eccentricity. The approach reminds me of a line from Ashley’s opera “Improvement,” something to the effect that, “if you want to count smells, you’ve got to count the bad ones, too.” Titled “Wishes and Dreams” (presented January 26-27), the most recent SCC featured short works by seven choreographers who received feedback from mentors Rozann Kraus and Margot Parsons (both modern choreographers based in the greater Boston area), dance critic Karen Campbell, and Shawn Mahoney (a dancer who has worked with numerous established choreographers, including Twyla Tharp). The results were decidedly mixed but presented in a professional sphere by co-producers Ruth Bronwen and Emily Estes, with thoughtful and intelligent lighting design by Matthew Breton.

Often I wonder why beginning choreographers are so drawn to dismal modes of representation: blank stares, desolate environments, angry partnering, murky music, and unattractive costume. Is life really so bad for these recent college graduates? Despite the fact that most young dancers in Boston are unfamiliar with Martha Graham, Anna Sokolow, Pina Bausch or even any of the “Konzept Tanz” artists of contemporary Europe, most of them see this kind of diffuse expressionism as a starting point and consequently they allow structure and form to remain peripheral concerns. I’ve served as a mentor for prior Shared Choreographers Concerts, so I know just how difficult it can be to convince a young woman to re-evaluate her attachment to suffering and injustice in order to contemplate formal concerns. Where do the phrases begin and finish? Are there structural points where both the music and the movement are in agreement? Is your dance the appropriate length?

Heather Baur, Jennifer Bourgeault and Bethany Field’s “A Question of Truth” was a usual collaboration, perhaps fun to dance but less convincing to watch. Ástor Piazzolla (his name spelled incorrectly in the program) provided the tangos for a series of episodes of flexed feet, cartwheels and labored partnering by the trio. These women perform as Collective Motion and describe themselves as “a modern, innovative company” based in Southern Maine.The program stated that,“…the assorted sources of input, the ability for artists to take on multiple roles, and the stirring of the very essence of dance makes Colective Motion a compelling addition to the Southern Maine artistic community.” As with all collaborations, however, somebody needs to be the boss, step back and actually look at the finished dance. Enjoying what you are doing is not the same thing as engaging an audience.

Emily Estes offered a classy solo combining generic modern technique and certain aspects of traditional yoga in “Crusoe,” set to an aria from Handel’s “Rinaldo,” a very sophisticated musical choice. She has a vivid stage presence and was simply dressed in Anna Zamarripa’s black dress with white piping along the seams.

Alice Hunter’s “The Blurts” was the finest work of the evening, an extremely quirky duet performed Marissa Carr and Jessie Mazzaglia in shiny long dresses in cool tones designed by Hunter. Gill Aharon provided an original electronic score that helped define the duet into sections, and Hunter explored various structural techniques (mirroring, asymmetry, unison, etc.) in a way that was both honest and clever. She works with puppetry as well, and the dancers resembled Kabuki marionettes at times, making for a dance that was simultaneously funny and disturbing. Somewhere along the line Hunter has developed a stunning sense of theatricality, and one wonders what her next dances will be like.

Handsome Joel Dear surrounded himself with nine young women to perform “Is This Goodbye?” to a score by Ennio Morricone. His choreography is hardly innovative, but he moves with great confidence. The final effect was largely commercial, with a kind of television variety-show sensibility. There are plenty of sweeping passages, unison corps work, and girls swooning and falling limp in Dear’s arms. Well, I suppose, somebody’s got to do it. Dear had a very strange act to follow. Preceding him was Glinda Lemon Drops Away Above the Chimney Tops of Oz (he/she goes by “Glinda Lemon” for short) in a solo titled “A Dream for Oz.” Not really a dance, Lemon sort of “behaved” on stage, running around a large crystal ball with a wand and whispering fragments of text such as, “…and she missed the Munchkins most of all.” The score was a recording of “Dandelion Wine” by Blackmore’s Night. With no discernable talent or ability as a dancer (it looked as if s/he was struggling with a routine from an adult beginners ballet class), Lemon was nonetheless intriguing. One could see her image reflected in the crystal ball during the solo (a nice use of proportion and scale), and the white satin costume and head gear were certainly luxurious. Lemon’s program bio says, “…she has danced with ethereal fairies as well as with many fairies who have achieved physical manifestation,” suggesting that Lemon has immersed “herself” in the development of some kind of artistic persona. I guess we’ll have to wait to see where Lemon takes this strange foray into character development, so there’s no reason to judge him harshly at present. A powerful solo from Ruth Bronwen (set to spoken text, Moby and Steve Reich) and a stark quartet by Kate Nies (set to music by Arvo Pärt) completed this mostly engaging program.

On January 28 I fretted over what to wear to the DeTour Fashion Show at Mantra, a spectacular club and French-Indian restaurant in downtown Boston. The event is an annual benefit for the Dancers Resource Fund at Boston Ballet, and this year featured the glorious Boston Ballet dancers modeling clothes by Nanette LePore, Stel’s, iBoutique, Mnski, Stil, and Calypso. Just hours before the show I was hemming a pair of Prada stretch jeans, which I paired with Prada square-toed black leather shoes, a Prada jacket and a perfectly ridiculous wool shirt with a big plastic red button on the chest, from COMME des GARÇONS. A pocket square from Kenzo completed the look. It was ready-to-wear, but it would do. I brought my young friend Lina, who looked stunning in a tight black dress and stiletto heels so tall and narrow that one of them became trapped in a sidewalk grate as we made our way to the club. I helped her remove the shoe from the grate in a strange echo of “Cinderella,” adding to the ballet theme of the night.

It’s always seemed a disappointment that the dancers in this now-formidable company continue to be promoted solely as artists and not necessarily as “stars.” They are equally at home with Art and Glamour, in my opinion, and this evening the focus was on the latter, along with luscious fabrics and spontaneous sexiness. This was evident when I spoke with corps de ballet member Melissa Hough (striking in a black silk evening dress from Intermix and a pair of leopard print pumps), co-producer for the event along with Katelyn Prominski. Hough had transformed the night into possibly the most intriguing fashion event I’ve seen, primarily by choreographing the models with a sense of humor and theatricality, and adding a corps de “runway.” The movement resembled a deconstructed, urban “Coppelia,” with the model/dancers as well-dressed automata. There were some extraordinary surprises: for a swimsuit segment the women wore pointe shoes, adding articulation and height; at another moment the men appeared on drywall stilts, adding a sense of danger and monstrosity. Along with the cocktails, the Tandoori chicken and tuna tartare, splendid photographs by Eric Antoniou flashed along the runway.

Fans might know that Melissa Hough is dancing Hippolyta in the company’s upcoming production of Balanchine’s “Midsummer Night’s Dream,” or the Waltz Girl in Christopher Wheeldon’s “Polyphonia,” but do they know that Hough loves Nina Simone and Ray Charles, and that she’s been choreographing all sorts of events since she made a simple country line dance in the 5th grade? Dancers are people with different tastes, capabilities and interests, even if they are part of a large, well-oiled operation like Boston Ballet. Simple, fun events like the DeTour Fashion Show permit their fans to know them more completely.