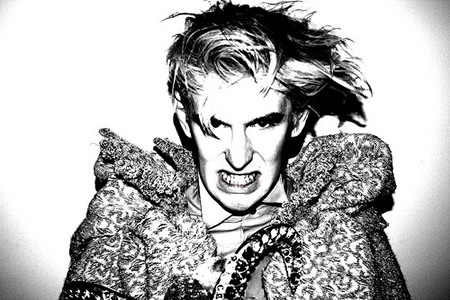 Patrick Wolf releases his fourth concept album “Battle;” a double album that has Oscar winning actress and UK avant garde filmmaker muse, Tilda Swinton, as the “Voice of Hope” narrator throughout the record. The album is released on Patrick’s own record label, Bloody Chamber Music, a bow to author Angela Carter, and is funded through Bandstocks.com; a revolutionary funding vehicle that allows fans to buy stocks in the album and to contribute to the financing of the music’s production and marketing, and as from this week is available to US fans.

I spoke to the twenty-five year old Sussex musician from his studio, located across from the London Tate Modern, who recently commissioned Patrick to perform a classical piece in celebration of Dutch artist, Daan van Golden’s, exhibition. Today, Patrick was working on the artwork for the album cover, as well as the set design and choreography of his new video.

Battle has two distinct takes on life and love, ones which reflect Patrick’s defining emotions of being alone and being in love. The first album, “The Bachelor,” is a celebration of the absolute love of solitude –to go anywhere and be anyone and to do anything. Despite this love of solitude, Patrick admits to a melancholy that sometimes goes hand-in-hand with being alone. “The first album is about loneliness. I would attend weddings in Spain and Ireland and I would always be the only bachelor. I was convinced I had the spinster gene. But I enjoyed being single. It was only at traditional get-togethers that I felt this loneliness because other couples would see my aloneness as a failure. I felt that this loneliness was definitely a positive thing for me. The record is also very much a masculine point of view of solitude.”

The music reflects this melancholy. But Patrick fell in love after the first album and started writing the second on a totally different vibe. “I fell in love and this reflects two sides of the coin. It’s a happiness product of knowing your pain. The songs on the second album, “The Conqueror,” are definitely more upbeat.” Both records reflect a different kind of love. First is a love of solitude, the second is of falling in and being in the actual state of love with another person. “If the world ended today and I could be with only one person, that wasn’t from my family, I would be with my boyfriend. We have a romantic love that is not defined or dictated by practical and financial matters.” One of the upbeat tracks on the second album was born from a trip to LA for the Jimmy Kimmel show. Patrick met and had sex with a Satanist. His voyeuristic tendencies took over and he wrote “Vulture,” a thrashing Californian upbeat industrial techno sound with lyrics that identify with the Celtic and Pagan research he conducted for previous tracks.

So how did he come to work with Tilda Swinton. “She is an icon in experimental art. America knows her as a Hollywood movie star but I haven’t seen any of her Hollywood movies. In the UK she is known for her work with Derek Jarman and Sally Potter, in films like Orlando, as well as, her own experimental art. I went to see her during a Q&A for her film, “Julia,” and I thought I’d just go for it and handed her a CD. Later she emailed me to say that she would love to act as a monologue performance artist with spoken word for my album.”

Patrick’s band is described as “a solid family” of instruments, programming, violinists, bassists, and a drummer –there’s a lot more musicians on this album –people he’s known for years. “I spent a year studying composition and this album has Brazilian rhythms, a big choir, and English marching drums –hence the name “Battle.” And was recorded in the city of “Battle” in east Sussex.

The artist enjoys complete independence from major record labels and it’s no secret about his departure from record giant Universal. “Large record companies have a lot to offer in terms of money and power but artists are confined and they ultimately lose their artistic freedom. The record companies worry about offending the public. There’s little politics in music nowadays as there was when music and art questioned the establishment, as they did in the Punk and New Romantic eras, when artists really pushed the boundaries. Even the last time there was a gay movement in the UK was during the anti-gay legislation of Section 28 in 1988.” (The notorious legislation banning the “promotion” of homosexuality in schools).

There’s still homophobia in the UK and record companies are wary to offend the conservative parts of UK society. For Patrick this meant his record company marketing him as the next Elton John. “Politics is pushing the boundaries of sound. My record company said they couldn’t control me and they wanted to get rid of me because I wouldn’t conform. Put it this way, how would you feel if you had a job where you weren’t allowed to quit, yet your boss could fire you and treat you badly if you didn’t conform. This is what happens to musicians all the time; look what happened with Prince.” Patrick was even less impressed with the record companies marketing efforts where they pushed him as a raver or the Village People. “My roots are in Bob Dylan and Jodi Mitchell. I didn’t want to be pigeon holed into being a gay performer just for gay audiences. I have a crossover audience. I sidestepped the stereotypical marketing. But then gay audiences were annoyed that my private life didn’t crossover into the writing and in my public life. They were annoyed I wasn’t Rufus Wainwright. Women love my show, so do straight boys.

" Gay musicians think they’ll lose their demographic if they broaden their audience. This isn’t so. The music transcends everything. Why should music be for one demographic? What if we found out today that Jodie Mitchell was transgendered? Would that change her music? Would the words take on a different meaning and lose their power? What if Madonna didn’t have her own identity or freedom to experiment and instead just cowed down to winning acceptance and more understanding. Buffy Saint Marie, Leonard Coen, and Nick Cave are honest and raw songwriters. I’m a songwriter and producer with a confident sound and image who plays experimental noise music. We don’t live in a utopia but we can just be ourselves and be free.”

His parent’s influence on his music, although never realized at the time, is telling. But it wasn’t until he was much older that he realized that not everyone’s mother is a painter or father is a jazz musician –so or course it’s only natural that they have influenced him. His father was in the punk band, The Sniveling Shits, and his mother listened to Joni Mitchell, Kate Bush, and Miles Davis. “My mother played “Ariel” by Kate Bush. I don’t think she gets enough credit in the British music press. She’s always misplaced as ‘that singer who dances and screams.’ She was totally independent, universal, and creative. She has a specific sound and specific energy in her videos and in her live concert. I played “Hounds of Love” over and over. People say I sound like Kate or play the piano like Kate. It’s a wonderful comparison.” His family also plays a part in grounding him and at home he’s just “Patrick.” He was a teenage runaway and earned money from busking. But he returned home when his father had cancer. His father has fully recovered but at the time Patrick was writing songs to his father to form a paternal link. He was opening up to him in regards to being gay and he desperately wanted to identity with his father.

Next month sees Patrick perform at Heaven nightclub in London and Europe’s largest gay venue. At age 13, he performed on stage with the Lady Bunny Band and played air guitar. In his 20’s he released critically acclaimed albums, Lycanthropy, Wind in the Wires, and The Magic Position.

Patrick’s style is as unique as his music. “I wanted to wear Vivienne Westwood and Alexander McQueen but I was poor so I bought fabric from thrift stores and got out my sewing machine. I want to inspire individuality and for everyone to get out their sewing machines and just be yourself.” Of course, now he’s lucky enough to be able to commission new designers and is working with top fashion school Central Saint Martins, most recent graduates for their fashion show this year. Patrick also posed for world-renowned photographer, Mario Testino for equally renowned fashion icon, Burberry. “I loved working with Mario, he was hilarious. He was very sexual and was coming on to me for the shoot. He would say, “I want to tie you up, you are very sexy.” He did this to make me feel as sexual as possible, instead of looking like Zoolander.

Fans in the US can now buy into the Patrick Wolf phenomena by purchasing stocks at the following links:

It is completely revolutionary and is undoubtedly Patrick Wolf.

Liu’s work has appeared in LA2DAY, Beatcrave, LACityzine, LA.Com, and The Examiner. She is a BA (Hons) Contemporary Media Practice graduate of the University of Westminster in London with more than 15 years industry experience on both sides of the Atlantic.

$5.87 (as of January 24, 2021 - More infoProduct prices and availability are accurate as of the date/time indicated and are subject to change. Any price and availability information displayed on [relevant Amazon Site(s), as applicable] at the time of purchase will apply to the purchase of this product.)

(2327)
$4.99 (as of January 24, 2021 - More infoProduct prices and availability are accurate as of the date/time indicated and are subject to change. Any price and availability information displayed on [relevant Amazon Site(s), as applicable] at the time of purchase will apply to the purchase of this product.)

$2.88 (as of January 24, 2021 - More infoProduct prices and availability are accurate as of the date/time indicated and are subject to change. Any price and availability information displayed on [relevant Amazon Site(s), as applicable] at the time of purchase will apply to the purchase of this product.)
related posts