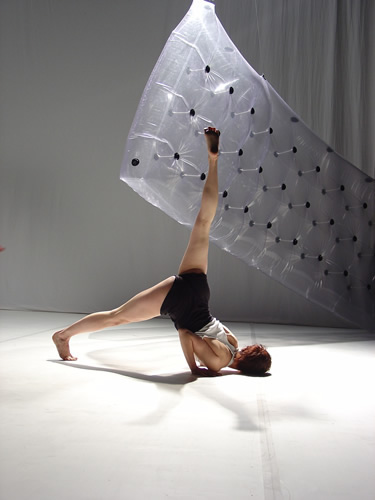 The foreseeable future of ballet looked rosy judging from the talent shown at the Guggenheim Works & Process series featuring the ABT Studio Company and students from the Jacqueline Kennedy Onassis School. For those of us who spent innumerable hours in ballet class, the choreographed, condensed class/performance was a sweet amble down memory lane… seeing each exercise build to the next, from plie to combination. The maturity of the kids impressed, particularly a small boy whose tiny legs bore strong muscles; he looked like a pint-size Herman Cornejo. A snippet of Sleeping Beauty showed how this bunch of individuals coalesced into a well-meshed totality. And a Kirk Peterson’s piece showcased three pairs from the Studio Company in elegant, complex partnering maneuvers.

The Brooklyn Museum sometimes puts up shows of dubious taste and artistic merit simply to draw people into its doors, reminding us that although Brooklyn may be hot, it’s still got a ways to go as a world-class art destination. But the Ron Mueck show takes full advantage of the capaciousness of the hulking, elegant old museum. Mueck’s gigantic or shrunken sculpture of people look exactly right given a ton of breathing room. A huge, solemn, naked man sits on a chair in the rotunda, utterly alone. An even more monumental, worried-looking woman lies proppred up in bed; the bed’s so realistic and comfortable-looking that you just want to climb onto the quilt next to her like a cat and take a nap.

Purple was the theme for this year’s program, which made for an entertaining bill of eight pieces whose title or costumes refer to the color. Alexei Ratmansky, who created the terrrific Russian Seasons for the company’s Diamond Project last spring, contributed the sole premiere, a piece d’occasion. Middle Duet, for Maria Kowroski and Albert Evans, showed why Ratmansky is The Man right now at NYCB (especially in light of Christopher Wheeldon’s resignation as Choreographer-in-Residence). Kowroski flicked out metronomic, precise movements with her weaponized legs; they followed the jazz-flavored drum line, deteriorating into slurred shapes. Evans unleashed some cat jumps; and finally they collapsed, face down. Humorous, neat, and purposeful – and in contrast to Peter Martins’ and Jorma Elo’s contests of Olympian skills, ballet category, and in parallel to Jerome Robbins’ lively N.Y. Export: Opus Jazz.

Gallace’s Fairfield Porter-esque landscapes or still lifes – snowy fields with a house, a cat, a vase of flowers – feel completely out of place at 303, which exhibits a lot of non-traditional, challenging art. But once you give yourself over to Gallace’s creamy daubs of pale pastels, where the stroke weight is equal for a tree limb and a vapor, there’s no turning back. Diminutive in size, these treasures are reminders of why we roam from gallery to gallery in search of simple enlightenment and pleasures in the form of art, why painting will never be irrelevant, and why we love strawberry shortcake on rare occasion.

This Polish company, just three performers, offered a good example of making a lot from a little. They focused and got the audience’s undivided attention in the lobby pre-show, where we were moved around politely so one dancer could pose in our midst. Two clear inflatables (one round, one rectangular) comprised the set, refracting the atmospheric lighting, and providing an apt show-ending metaphor upon deflation. The movement ranged from Laurel & Hardy antics to slouchy, gravity-bound pedestrian stuff, but it was secondary to the overall mood.

Empty Moves (Part I) presumably took its name from the accompanying sound, Empty Words, by John Cage, which consists of the composer reciting words, syllables, and letters to hoots and hollers of a live, increasingly impatient Italian audience. Preljocaj’s bold choice of ‘music’ meant the soundtrack overshadowed the dance, which was itself very powerful and intently executed by the cast of four, particularly the knotty quartet passage. But Preljocaj never has shied away from baggage-laden music. Speaking of which, the choreographer’s Les Noces was also performed, memorable for its life-sized rag doll brides and daredevil leaps and catches, but mainly for the company’s trademark technical precision and polish.

(21841)
$17.39 (as of January 23, 2021 - More infoProduct prices and availability are accurate as of the date/time indicated and are subject to change. Any price and availability information displayed on [relevant Amazon Site(s), as applicable] at the time of purchase will apply to the purchase of this product.)

(40647)
$9.98 (as of January 23, 2021 - More infoProduct prices and availability are accurate as of the date/time indicated and are subject to change. Any price and availability information displayed on [relevant Amazon Site(s), as applicable] at the time of purchase will apply to the purchase of this product.)

(22247)
$17.70 (as of January 23, 2021 - More infoProduct prices and availability are accurate as of the date/time indicated and are subject to change. Any price and availability information displayed on [relevant Amazon Site(s), as applicable] at the time of purchase will apply to the purchase of this product.)
related posts