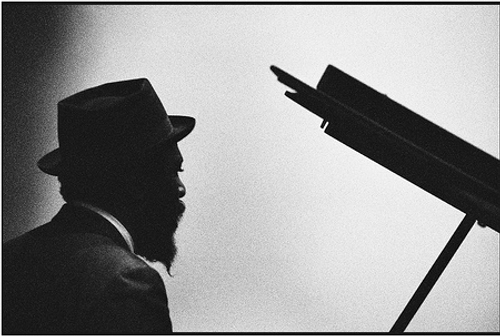 Thelonious Monk’s life looms so large that legends about him have at times eclipsed his musical legacy.  two books revisit Monk’s life for the record to bust through the ‘Mad Monk‘ image. First Robin D.G.Kelley’s Life and Times of an American Original, to take a cue from Monk himself, a  straight, no chaser’ account of a jazz titan. Then Monk is captured in real time by Life photographer W. Eugene Smith at all night jam sessions at 821 6th Ave, the subject of Sam Stephenson’s sublime photo archive The Jazz Loft Project.

Kelley is an accomplished pianist himself and professor of American studies at USC and author of Freedom Dream: The Black Radical Imagination, has written a definitive, if sometimes slow-moving, biography. He spent 14 years researching, with exclusive material interviewing surviving family members, with exclusive first time access to Monk’s estate. His meticulous research doesn’t nail Monk down as much as investigate him as he was- a complex, guarded personality to some and to others, like his music, completely open, pragmatic and clearheaded.

Kelley vividly chronicles the development of Monk’s style and his piano innovations. He doesn’t avoid music theory, something that might give readers pause, but actually, these elements make for some of Kelley’s most engrossing chapters.

Kelley could trim the beginning, passages are redundantly reinforced by often pedestrian quotes in the initial chapters. But that is a minor criticism, jazz fans and bio readers will not miss his brilliant craft.  Everything is pristinely verified in endnotes and index, a tribute to the artist and testament to Kelley’s achievement. By the time Monk is at the center of NY jazz life, this book takes off in the cyclonic world of jazz in the 40s and 50s and defining performances and recordings.

Most valuable are Kelley’s corrections of gossip about Monk’s erratic behavior due to his bipolar disorder, which caused many misunderstandings. Monk had a minor car accident, but was so shaken up that the police sent him to Bellevue for three weeks, undiagnosed. “One might have expected the staff psychiatrist to declare Monk a ‘paranoid schizophrenic, a catch-all phrase frequently applied to black patients and nonconformist artists.“ Kelley writes.

By the 50s, his marriage to a Nellie was marred by unemployment and Monk’s drug use, but the birth of their second child and a record contract put him on a new path, even though he was getting bad press for both his performances and recordings. Monk wasn’t transferring commercially, but his legend was still growing among musicians and a cult following. By the time Monk was on the cover of Time Magazine in 1964, he had resurrected his career from his own tarnished reputation and many personal setbacks.

In restoring Monk’s image Kelley reveals him as a devoted family man. His era-defining Round Midnight in fact was written for his wife Nellie, who was his business partner. His dissecting his other significant relationships, including the jazz patron Baroness Nica de Koenigswarter, delved into, by Kelley, at arms length.  Monk was a loyal and supportive of friends and colleagues, especially those in trouble financially or with drugs. Monk’s final years of physical and mental decline are sensitively handled by Kelley.

Some of those luminaries are captured by W. Eugene Smith in The Jazz Loft Project, a photo and text essay curated by Sam Stephenson. An all business, but ‘at ease’ Thelonious is the heart of the book. Smith, WW II photographer for Life Magazine was on assignment in Pittsburgh when he got detoured and installed himself at 821 6th Ave in NYC, in the middle of the wholesale flower district that was the underground hub of jazz luminaries, writers, artists and junkies. It was the jazz version of The Factory.

Stephenson brings the whole milieu alive with 220 gorgeously transferred photographs and kinetic annotation. It is not only a recovered time capsule of art and artists in an improbable setting, it is transporting document.

There are also artifacts, like reel to reel boxes of sessions, transcribed conversations and notations of radio broadcasts of operas, plays and authors reading poems. Real time broadcasts of the speeches by Dr. King, the World Series, bulletins of the Cuban Missile Crisis, all part of the sound field of the jam sessions.  Meanwhile, Stephenson gives details about the commercial downtown scene and why the musicians escaped to the loft. He also drops in Smith’s harrowing story as one of the world’s best known photographers living in splendid artistic squalor at the expense of everything else in his life.

It is the impact of his photos that become hypnotic in this fascinating book. Smith has an obvious eye for composition, especially in portraiture, but it is the building itself and the streets, a forgotten world is rescued in Stephenson’s thought provoking collection.