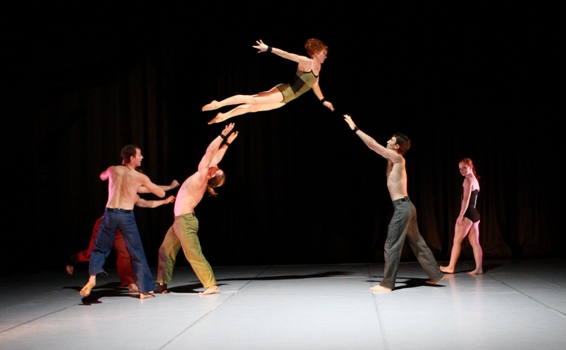 C!RCA members during one of the company’s acrobatic numbers
Photo courtesy of C!RCA

To say that the seven members of C!RCA are breathtaking performers is an understatement; the company’s performance at Memorial Hall showcased a level of fearlessness that rarely is seen up close.

Ensemble numbers demonstrated the group’s tumbling skills, and its ability to work together in complicated lifts and balances. Company members made towers three people high, both right-side up and upside-down, and threw one another across large distances, landing sometimes in one another’s arms and other times in assisted lifts. Though there was no clear narrative structure from the show’s start to finish, the performers’ movement qualities noticeably transformed throughout; what began as aggressive interactions between acrobats evolved, in time, into more playful and nurturing relationships.

Circus-style solo acts like (aerial) silks, rope climbing and hand balancing allowed for individual character development and audience interaction between larger group numbers. A solo by performer Darcy Grant gave a whole new definition to the notion of talking with one’s hands; Grant’s intricate hand choreography told a humorous story that had audience members laughing and smiling. At one point, Grant’s pointer and index fingers became a small man, ready to jump off of his opposite hand, held high above the ground. Not to be masochistic, Grant lowered his left hand to the ground so the small man could safely descend.

In another solo, performer Scott Grove conjured images of a bodybuilding competition; Grove restricted his breathing, tightened his muscles and rotated his limbs to highlight the muscle definition of his bare chest. Grove’s “pump up” moments were broken by standing back tucks and his movement to other parts of the stage.

This muscleman motif came into play again later in the show, when company member Lewis West challenged Grove to a friendly competition. The two men tried to upstage one another with flexing, posing and childlike trickery, but Grove was eventually intimidated by the mere presence of hand-balancer Valérie Doucet. Doucet appeared as a love interest again later in the show during a playful piece set to “Perhaps, Perhaps, Perhaps” by Cake.

It should be noted that many of C!RCA’s acts were inherently sexy— not because they included sexual references, but because the movement and the music naturally had sensual qualities. Obviously aware of these factors, the show’s choreographers inserted unexpected grotesque elements into the potentially offending acts. In an acrobatic floor routine, Doucet quickly lurched her body into drastic hyperextensions and angular poses, while rope climber Emma McGovern pulled either end of a pink elastic out of her nose and mouth mid-routine.

Viewers often gasped or yelped when C!RCA’s choreography got particularly dangerous; it was clear that a single misstep on anyone’s part could result in serious injury or death. Suffice to say, C!RCA company members’ deep level of trust allowed their show to run like a well-oiled machine. For as long as the performer’s bodies will allow them to do the highly physical acts that the company demands, audiences will be awed.