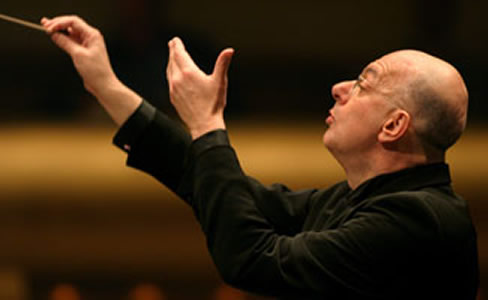 When you play second fiddle, you take more chances. That is perhaps why the Jerusalem Symphony Orchestra has chosen less-played works by famous and not-so-famous composers for its latest U.S. tour, whereas its more august counterpart, the Israel Philharmonic Orchestra–which, in a curious coincidence, is also touring America through mid-November–is sticking with standards by Bernstein, Brahms, and Tchaikovsky. While the ISO is booked into large houses on both coasts, the JSO is making the rounds of smaller venues in the West and Midwest, and its programs and choice of performance locales say a lot about its evolution and character.

The JSO, which originated in the 1940s as Israel’s national radio orchestra, has branched out in modern times to become a proponent of emerging composers and works. Conducted by music director Leon Botstein (who also helms the American Symphony Orchestra and is founder and co-artistic director of the Bard Music Festival), the orchestra champions innovative programming. Botstein, noting that the JSO needs to reflect the diverse makeup of its host city, has followed through in the first of two programs for the band’s 2008 U.S. tour, selecting compositions by an Austrian (Ernst Toch), a Hungarian (Miklós Rózsa) and an American (Aaron Copland).

Botstein’s tack on the opening night of the tour produced some qualified success. The first half of the concert highlighted the talents of guest soloist Robert McDuffie in the seldom heard Violin Concerto, Op. 24 by Rózsa, a composer most known for his film scores. This exuberant, folk-inspired piece makes sweeping use of an orchestra’s string sections and is a tour de force for the soloist (indeed, Rózsa wrote it for Jascha Heifetz in 1953). McDuffie, also a showman, practically danced as he bowed and fingered his way through the tortuously difficult concerto. At times, his enthusiasm threatened to rush Botstein’s tempi; the two shared what appeared to be coordinating glances, lest McDuffie become a runaway fiddler leaving the rest of the ensemble in hot pursuit. But by the allegro vivace movement, conductor, soloist, and orchestra reached a balance in what was by and large a thrilling rendition. The audience rewarded them all with sustained, enthusiastic applause.

Copland’s Symphony No. 3, which comprised the second half of the evening, stirred a less animated response, being more cerebral and not as emotionally accessible as some of his folk-tinged ballets. That may have been what Copland wanted; in his own words, he acknowledged the symphony’s formal structure, which plays out like a starchy parade of interlocking variations that meander at length until reaching a crescendo. Botstein obviously has some feeling for this work, coaxing the strings and sharply indicating the percussive counterpoints. But the orchestra—particularly the horns—responded in only workmanlike fashion, at times seeming uninspired and even sluggish during the booming “Fanfare for the Common Man” reprise (which Copland cribbed from himself in its entirety and developed as the work’s fourth and final movement). At about 40 minutes, Copland’s symphony as played here felt drained of passion until the closing movement, at which point the electrifying finale felt like too much, too late.

Least interesting of all was the program opener, Toch’s “Big Ben, Variation Fantasy on the Westminster Chimes,” Op. 62. At its best moody and even ethereal, the piece is overly long for what it achieves: a kind of Alfred Hitchcock movie-score impression of the fogbound London landmark. (Toch, too, wrote film music, though not of Rózsa’s stature.) Though the melody that inspired Toch is a music-box cliché, the composer went to great lengths to explore the theme, availing himself of all instruments in a big orchestra. And even as Botstein and his musicians acquit themselves in a professional reading, the inclusion of this piece on the program begs the question: Just because you can play it, why?

The orchestra performed two encores, which Botstein begrudgingly acknowledged were added because the band was on tour: “Blue Tango,” the self-consciously kitschy trifle by Leroy Anderson, and “Jerusalem of Gold,” an orchestral arrangement of the self-consciously arty song by Naomi Shemer that would have benefited from a little kitsch. Both were played inoffensively enough and brought the evening to an upbeat, if somewhat lightweight, close.