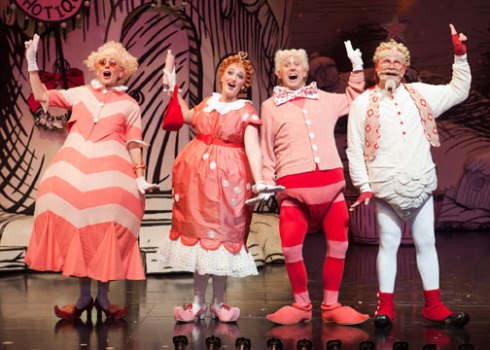 I have fond memories of watching “How the Grinch Stole Christmas” on the black-and-white Motorola growing up. So I thought it would be nice to take my 9-year-old son to see the Old Globe’s annual Grinch musical. Who couldn’t use a stirring tale of redemption every now and then? And the boy could stand to redeem himself in any number of ways.

Let me assert my personal belief that theater should enhance self-knowledge. And in that sense, this musical did not disappoint. I realize now, I am the Grinch.

You’re familiar with the story. Green Seussian creature loathes all aspects of Christmas and the Whos who celebrate it so loudly. He disguises himself as Santa, tethers his dog Max to a sleigh and attempts to confiscate all Christmas goodies and cheer. The tale is so nicely told in the cartoon. Boris Karloff’s impeccable diction gives it just enough edge. The Whos, for the most part, are distant apparitions singing in the night.

The play, on the other hand, offers an up close and personal view of the Whos and Whoville. We see them shop and decorate and coo. The women are resplendent in their Who balloon dresses and the men are awkward in what can best be described as Who diapers. The children are proportioned more normally but add an element of treacle that could throw many people into diabetic shock.

Seeing the Whos in all their glory, I briefly felt empathy for the Grinch but ultimately zoomed to contempt. He didn’t go far enough. He should have TP’d their houses and uprooted their rutabagas. And Max. In the cartoon, he is mostly ambivalent towards the Whos. He just wants to get through his crummy day. But theater Max (Steve Gunderson and Logan Lipton) is entirely pro-Who. He is a Who advocate.

In that light, the Grinch (Steve Blanchard) comes off less as a misanthrope than a perfectly reasonable creature. I too would recoil at the Whos, and often did. Blanchard’s Grinch adds an element of humor to the performance but he is only one man.

James Vasquez’s direction is mercifully quick. There are a lot of moving parts to this show and he winds them together quite nicely. The costumes, as mentioned, are effective and quite Who-ful. The sets are also nicely rendered and transmit a sense of motion when called for. The songs (except the anthem from the cartoon) are inoffensive and unchallenging. If they were wine, they would be white Zinfandel.

Anyway, as I looked around the audience, I noted that no one else seemed to share my disdain. People clapped and sang and chuckled merrily. There was even a grade-inflation standing ovation at the end. And I thought, what kind of a monster does not appreciate the sheer existential joy of happy Whos frolicking in the snow? A Grinch.

On the way to the car, I asked my son what he thought. “I don’t know,” he said. “I tend to like things with more plot development.”