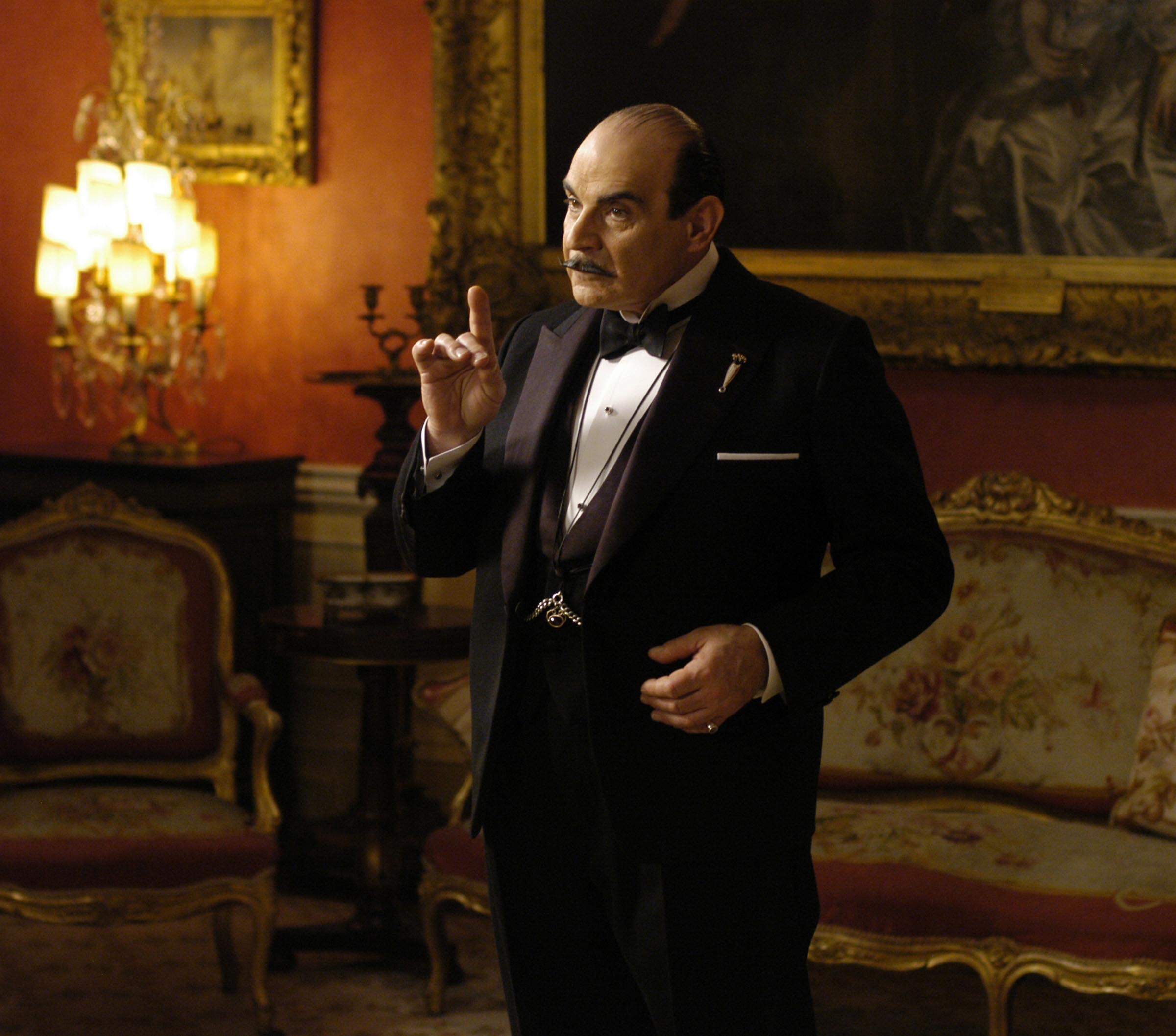 David Suchet as Hercule Poirot in Series X on PBS

Get the popcorn – and watch three new episodes featuring David Suchet as Hercule Poirot, Dame Agatha Christie’s favorite Belgian sleuth. The series, on PBS “Masterpiece Mystery!,” begins with the one episode I have viewed, a fascinating new version of the renowned “Murder on the Orient Express” (July 11). “Murder on the Orient Express” is one of Christie’s best-known novels for its ingenious plot, richly detailed characters, and brilliant solution.

The action takes place in the early 1930s on a wintery three-day ride aboard the glamorous Orient Express train from Istanbul to Calais. The train suddenly stops when snowdrifts block the tracks at a desolate spot in the Balkans. During the night, murder has been committed. Mr. Ratchett, an odious American millionaire, is found lying dead in his berth – stabbed. The untrodden snow around the train confirms that the murderer is still aboard.

Hercule Poirot, a last-minute passenger, must solve the crime with 12 seemingly innocent and uninvolved passenger as the only suspects. If you are a fan of “Murder on the Orient Express,” as I am, you’ve read the book, seen the two movies (one starring Albert Finney, 1974, and the other starring Alfred Molina, 2001) and played the video game (http://Culturevulture.net/ElectronicArts/murderontheorientexpress.htm).

Each version has its distinct qualities, based upon when it was created, the star performers, and the medium. But none, not even the Christie novel, has the emotional impact of this new ITV Studios adaptation.

Although the plot of “Murder on the Orient Express” remains unchanged, screenwriter Stewart Harcourt has given Poirot an inner religious and moral life. We see Poirot take solace in his Catholicism and seek guidance from God. He is also uncharacteristically angry and embittered toward those who defy the law. Poirot’s struggle with his own conflicts weaves new texture into his character and greatly enhances the gravitas of the episode.

Interestingly, Poirot is an old man in this production, although the plot is clearly set in the 1930s. Perhaps his age was seen as an appropriate accompaniment to his emotional inner life.

David Suchet is superb in his role, even when he overacts a bit. The added undercurrents in Poirot’s character allow him to perform with more depth than the typically confident Poirot using his “little grey cells.”

The cast includes Eileen Atkins (“Cranford”), as Princess Dragomiroff, Barbara Hershey (“Portrait of a Lady”) as Mrs. Hubbard, Toby Jones (“W.”), as Samuel Ratchett, and David Morrissey (“Sense and Sensibility”) as Colonel Arbuthnot. Some of the filming included Malta standing in for Istanbul.

Also, “David Suchet on the Orient Express: A Masterpiece Special” airs on many PBS stations July 7, 2010. This frothy travelogue follows Suchet (as himself), riding the meticulously restored modern version of the Orient Express across Europe, although at times the hour resembles an infomercial for the Venice-Simplon Orient Express company.

The Poirot season continues with a new version of “Third Girl” (July 18), a taut psychological thriller co-starring Zoë Wanamaker as eccentric crime novelist Ariadne Oliver (purported to be modeled on Christie herself).

Troubled heiress Norma Restarick (Jemima Rooper, “Lost in Austen”) calls on Poirot to confess that she might have committed a murder. Then she flees with no details given. Who might have been murdered is solved when the body of Norma’s nanny is found in the building where Norma shares a flat with two other young women (Clemency Burton-Hill and Matilda Sturridge).

It’s followed by “Appointment With Death” (July 25), set at an archaeological site in Syria where a murder is committed. The vacationing Poirot digs into the mystery and discovers too many suspects, including an obsessed archaeologist (Tim Curry, “Return to Cranford”) an unconventional travel writer (Elizabeth McGovern, “Once Upon a Time in America”), a witty psychiatrist (John Hannah, “Four Weddings and a Funeral”), the archaeologist’s son (Mark Gatiss, “The League of Gentlemen”), and even a nun on a pilgrimage (Beth Goddard, “Lewis”).

All have a motive, but only Poirot can untangle the fiendishly clever plot and reveal who arranged the appointment with death.

In early 2010, it was speculated the Poirot series might end before the last six stories (out of 71) are filmed. David Suchet said, “I’m pragmatic and accept that things get cancelled. Of course, there are cutbacks in TV drama and if it is not to be, it is not to be. I will have to be a big boy and accept it.” He added, “Of course I would be very sad if it didn’t get recommissioned.”

Suchet also stated in April 2010 that if the series were to return, but on a lower budget scale, he would not want to continue making the last episodes if they would compromise the quality of the program.

So now is the time for fans to let ITV know that we would like ITV to produce the last of the Hercule Poirot stories by emailing ITV at viewerservices@itv.com or by sending a letter to:
Viewer Services ITV Plc
Gas Street
Birmingham B1 2JT UK