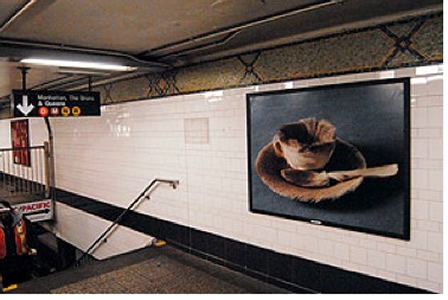 Remember the sad time when MoMA closed its headquarters for renovation, forcing legions to cross the god-forsaken East River to Queens, where it shattered the space/time continuum in a hangar-like aluminum shed? It’s not exactly the same, but some masterpieces from MoMA have transplanted themselves, via giant plastic decals, into the Hades-like Atlantic/Pacific transit complex in Brooklyn in what has been dubbed a Schwarzeneggeresque “station domination.” (The catacombs have NOTHING on this monstrosity of tunnels and stairs, although Manhattan’s Fulton Street subway complex surely does.)

In fact, MoMA/AP is way better, because it catches folks by surprise, at least it did me. MoMA has put up nearly 60 different “artworks,” most of which are familiar, and some of which are new. Icons include Meret Oppenheim’s Object (“fur teacup”), Picasso’s Demoiselles D’Avignon, and van Gogh’s Starry Night reside next to fresher names such as Wangechi Mutu and Bill Morrison. Also included are works of industrial design, such as John Barnard/Ferrari’s Formula One racing car and flower printed fabric by William Morris.

The artworks are supplemented by graphic elements that parallel the escalator, wrap columns, and even turnstile bars with a bold design scheme in fuschia/black. They printed a humorous subway map-like flyer diagramming the locations of the work, plus little factoids and games. Oh, and a coupon for free entry to MoMA, worth $20. (You think, wow, I save $20! Whoa—it costs $20 to enter MoMA?)

MoMA’s branding and marketing is undeniably superb—tops in terms of consistency, simplicity, and appeal, right alongside its (temporary) Fort Greene neighbor and my home away from home, BAM. But it can feel mercenary. My first reaction to learning about this project (officially, MOMA ATLANTIC/PACIFIC) was that it is altruistic, bringing these great artworks to the masses, putting thought-provoking, historical stuff in the place of sneaker ads. (Although in defense of advertising, many of the ads displaced by the artworks are themselves works of art—reductive, often with just a word or two, with gorgeous imagery. Kudos, mad men and women.)

But today I noticed that huge, round pink stickers have been added here and there. They feature a big price at center, with a qualifier. “$0 – Target Free Friday Nights.” “$75 – Membership.” “$120 – Dual Membership.” Which promptly reminded me that they’re selling MoMA itself through this whole endeavor. It’s not that I forgot that, but it made it feel like the original, pricetag-free installation was just one huge hunk of cheese put out to bait us two-legged rats. It provokes the age-old debate between the enriching/provocative qualities of the artworks themselves versus their monetary value.

It’s a brilliant installation and marketing ploy, but who knows how many subway riders they’re going to convince to part with 75 precious clams (or as MoMA itself frames it, nearly the cost of an unlimited monthly Metrocard) when they just saw the highlights for nothin’. But it sure is fun watching them try.