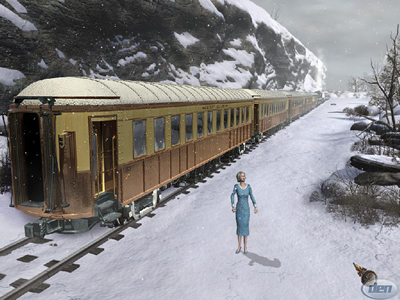 In my previous article, which explored computer adventure games genre (http://Culturevulture.net/ElectronicArts/playsgames.htm), I mentioned that I was anticipating with pleasure Adventure Games’ release of Murder on the Orient Express, based on the famous Dame Agatha Christie mystery novel of the same name. I’ve just now finished the Murder on the Orient Express game and found it technically a big improvement over the first Agatha Christie game, And Then There Were None, and much more fun to boot.

The singular best feature of the game is the introduction of Christie’s character, Hercule Poirot, the renowned Belgian detective. Poirot is superbly voice acted by David Suchet, the actor who personified the role of Poirot in the British television series, aired by PBS and A & E networks. For Christie and Poirot aficionados, nothing could be better than Suchet playing Poirot.

The Murder on the Orient Express game essentiallyfollows the clever plot of the book and a copy of the book is included in the game’s packaging. The game’s action takes place in the 1930’s during a winter ride on the Orient Express train, where Hercule Poirot is a last minute passenger. A new character, Antoinette Marceau, takes a central role in the game. Antoinette is a young railroad company employee who has been assigned to ensure that the VIP Poirot is well treated.

When an odious man, Samuel Ratchett, is killed in his compartment, it doesn’t take Poirot’s genius to deduce that all the remaining passengers and crew are murder suspects. Unlike the book, the effete Monsieur Poirot’s ankle is slightly injured and he takes to his bed. He appoints Antoinette to do his legwork and, as she is a fan of the moustached detective, she willingly accepts his assignment.

By pointing and clicking, the player directs Antoinette to interview the passengers and collect and use the clues, passports and fingerprints in order to unravel the true identity of the passengers and their relationship to the murder victim. When Antoinette finds a clue, we hear praise from Poirot (“Excellent, Mademoiselle!”) and when she takes a misstep, we hear his gentle chiding (“Think, Mademoiselle!”). She can visit Poirot to convey information and ask for help during the game. He then uses his “little grey cells” to analyze the data and give advice about how she should proceed. If the player has chosen to take “Poirot’s Challenge” and solve the crime without clues from Poirot, points are awarded and subtracted depending upon whether his help is needed.

It’s always a bit dicey when a book is translated into a film or computer game. At the conclusion of thegame, three theories of the crime are proposed. One theory is new and supplements the two in the book. This new twist is definitively a plus for those of us who remember the surprise ending of the book. And Antoinette is a well developed character and her addition was successful. I would have liked Poirot to have had a more prominent role however.

Murder on the Orient Express has many operational positives. The player can review the list of suspects, their histories, alibis, passports and compartment numbers at any time, although keeping a pen and paper handy may be helpful. Getting around the train is made infinitively less tedious by a short-cut system…you can click your way from one car to any other, rather than having to direct Antoinette to walk back and forth through the train. The voice acting, music, character rendering and detail, scenery, and general operation of the program are far superior to those of And Then There Were None. There are only a few puzzles and they make sense in the context of the plot… a refreshing change.

I would have liked to have seen, however, a greater variety of settings. Although there are a few short scenes that take place in other locations, such as a marketplace, train station, and snowy woods, the bulk of the game is spent in the same five train cars.

I have played two other games with train locales, the Last Express, published in 1997 by Broderbund Software, Inc. / Havas Interactive and (I’m somewhat embarrassed to admit) Nancy Drew: Last Train to Blue Moon Canyon byHer Interactive. So, I can’t help but compare those games to Murder on the Orient Express.

The Last Express also takes place onthe Orient Express, but in 1914, during its last run before the outbreak of World War I. The Last Express, now out of print but available on the used market, is a very complex game that takes place in real time, so there are many actions and conversations that don’t immediately move the plot along, but add richness and interest to the game. The real time feature creates some problems however, since the player can fail to take an action in time and so have to go back to and re-do a previous part of the game. I remember making the protagonist wander back and forth endlessly through the train cars, either waiting for something to happen or trying to find something or someone. So, I really enjoyed the ease of use of Murder on the Orient Express.

Nancy Drew: Last Train to Blue Moon Canyon, is designed for the pre-teen and above market and it is therefore a much simpler game, in plot, length and graphic complexity than either Murder on the Orient Express or the Last Express.

I enjoyed playing Murder on the Orient Express, though I wish I hadn’t known “who done it.” It’s a well-conceived, well-executed game; I’m primed for more Poirot games.