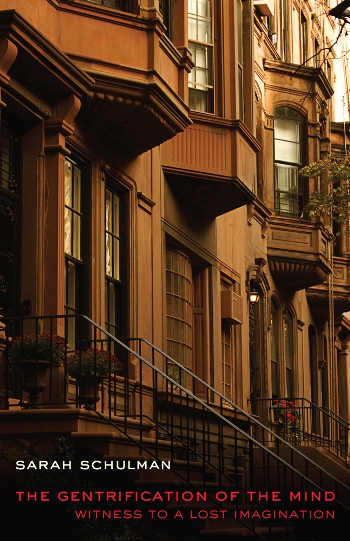 “The Gentrification of the Mind: Witness to a Lost Imagination”
By Sarah Schulman
179 pages, $27.95
University of California Press
February 2012

No book has rocked my world in recent times more than Sarah Schulman’s “The Gentrification of the Mind: Witness to a Lost Imagination.” Schulman borrows from urban housing development the concept of gentrification — in which complicated, racially and culturally mixed, financially marginal neighborhoods are eradicated and replaced by areas that are more bland, sterile, upscale, and/or culturally homogenous — to explore the impact of AIDS on the gay world and by extension on American life. The book lays out how difficult, messy, tragic truths have been replaced by falsehoods that are convenient or flattering to the dominant culture.

The book’s biggest contribution is Schulman’s clear, smart delineation of the idea of gentrification of the mind as “an internal replacement that alienated people from the concrete process of social and artistic change,” whose many intellectual ramifications she enumerates. “Gentrification is a process that hides the apparatus of domination from the dominant themselves,” she writes, pointing out as an example that “If you attempt to identify privilege you are ‘politically correct’ or oppressing them with ‘reverse racism’ or other nonexistent excuses that the powerful invoke to feel weak in order to avoid accountability.” Throughout the book, she scatters other definitions in sometimes hilariously blunt and trenchant language: “Gentrified thinking is like the bourgeois version of Christian fundamentalism, a huge, unconscious conspiracy of homogenous patterns with no awareness about its own freakishness…. Gentrification culture was a 20th-century, fin-de-siècle rendition of bourgeois values. It defined truth-telling as antisocial instead of as a requirement for decency…. The gentrified mind becomes unable to see lived experience because it is being bombarded by false stories.”

The book is organized in two parts: “Understanding the Past,” which examines the impact of AIDS on a generation of gay Americans, and “The Consequences of Loss,” which attempts to break through a thick crust of grief and denial to discuss pockets of culture and politics that have been gentrified and what replaced them. The centerpiece of the book, an essay called “The Gentrification of AIDS,” contains Schulman’s most eloquent fury and devastatingly acute analysis. This key passage deserves to be quoted in full:

“81,542 people have died of AIDS in New York City as of August 16, 2008. These people, our friends, are rarely mentioned. Their absence is not computed and the meaning of their loss is not considered.

“2,752 people died in New York City on 9/11. These human beings have been highly individuated. The recognition of their loss and suffering is a national ritual, and the consequences of their aborted potential are assessed annually in public. They have been commemorated with memorials, organized international gestures, plaques on many fire and police stations, and a proposed new construction on the site of the World Trade Center, all designed to make their memory permanent. Money has been paid to some of their survivors. Their deaths were avenged with a brutal, bloody, and unjustified war against Iraq that has now caused at least 94,000 civilian deaths and 4,144 military deaths.

“The deaths of these 81,542 New Yorkers, who were despised and abandoned, who did not have rights or representation, who died because of the neglect of their government and families, has been ignored. This gaping hole of silence has been filled by the deaths of 2,752 people murdered by outside forces. The disallowed grief of 20 years of AIDS deaths was replaced by ritualized and institutionalized mourning of the acceptable dead. In this way, 9/11 is the gentrification of AIDS. The replacement of deaths that don’t matter with deaths that do. It is the centerpiece of supremacy ideology, the idea that one person’s life is more important than another’s. That one person deserves rights that another does not deserve. That one person deserves representation that the other cannot be allowed to access. That one person’s death is negligible if he or she was poor a person of color, a homosexual living in a state of oppositional sexual disobedience, while another death matters because that person was a trader, cop, or office worker presumed to be performing the job of Capital.”

As a lesbian artist living and creating in the East Village during the 1980s, Schulman had a front-row seat to the catastrophe of AIDS, the steady cascade of human casualties, the familial neglect and political indifference that greeted the suffering, and the community organizing that eventually made a dent in how AIDS was viewed and treated. A prolific and world-celebrated novelist, playwright, screenwriter, historian, educator, and activist, Schulman co-founded with Jim Hubbard the monumental ACT UP Oral History Project, from which they have crafted a full-length documentary about ACT UP, “United in Anger,” scheduled for release later this year.

“For the first 15 years, the centerpiece of my young adulthood, I watched many people die and suffer and in the end forgot many of them,” she writes. “And all along it has puzzled me that the AIDS experience is not recognized as an American experience, while for me it is the American experience.” Throughout the book, and especially in the chapter entitled “Realizing That They’re Gone,” Schulman pays specific tribute, both generous and frank, to friends and colleagues not famous enough to be memorialized otherwise: Jon Hetwar, Sal Licata, Mark Fotopoulos, Michael Callen, Robert Hilferty, John Bernd, Phil Zwickler, Assotto Saint, Donald Woods, Bo Huston, Stan Leventhal, David Feinberg, Rita Redd, John Preston.

I, too, lived in New York during this same period of devastation. I knew half the people on her list and have my own additional roster of departed friends and acquaintances, half-remembered and incompletely mourned. Just thinking about them can bring a rush of sorrow and agony to the surface. I have searched far and wide, publicly and privately, for writing and conversation that achieves just this quality of commemoration, and my appreciation for it cannot be measured.

In subsequent chapters, Schulman talks about the gentrification of creation (mostly a tribute to East Village artists who have not, by her standards, sold out), literature, and gay politics with a great deal of scorn and opprobrium. “How did the gay liberation movement… this radical, living, creative force get excluded from Obama’s freedom vision and deteriorate into a group of racist, closeted, top-down privatized couples willing to sacrifice their entire legacy to get married? And fail?” She writes about her work as a writing teacher with plaintive honesty. She searchingly contemplates what constitutes happiness and what political and economic sacrifices the pursuit of that happiness requires. And she closes the book with a startling manifesto about being uncomfortable, a condition that contemporary life encourages us to avoid with every ounce of our beings and yet a state that is necessary if change is ever going to take place.

Schulman is the kind of brave writer and thinker who’s not afraid to exaggerate at the risk of going off the rails, so she does sometimes. Her venomous shredding of Andrew Sullivan and her analysis of how prestigious writing awards exclude gay and lesbian authors are fascinating to read, truthful to some extent but also undercut by insupportable oversimplification (no one else I know considers Andrew Sullivan any kind of gay leader) and traces of professional envy. Her observations about generational differences in viewing AIDS is considerably less nuanced than those of the late Eric Rofes, in “Dry Bones Breathe: Gay Men Creating Post-AIDS Identities and Cultures.”

But I respect Schulman’s commitment to writing the way she wants others to. Early on, she lets readers know how she’d like us to consume “The Gentrification of the Mind”: “As a reader myself, I have always most enjoyed books that I can be interactive with. I like to fiercely agree with one idea — and fiercely disagree with the next. That kind of dynamic relationship requires a lot of ideas coming at once, from which the reader can pick and choose. Nothing bores me more than the one-long-slow-idea book, and I promise to never write one.” If you’re not arguing with her, you’re not reading the book right.

On a small, persnickety practical note: the quantity of typos and misspelled names (especially of well-known artists such as Allen Ginsberg, Charles Ludlam, and Alison Bechdel) is astonishing. I don’t hold it against the author, but it’s dismaying evidence of the low-level of copy-editing even at a publishing house as esteemed as the University of California Press.

I would be remiss if I didn’t mention that I’ve known Schulman personally for over two decades. We co-wrote a theater column for a year or so, and we were close friends until we had a falling out in 2003. Nevertheless, I consider her to be one of the finest minds of her generation. Her best novels are “After Delores,” “Rat Bohemia,” and “Shimmer.” Her best plays have not been produced yet. Among her nonfiction, “My American History” and this book rank among the best alternative histories published in the last 50 years.