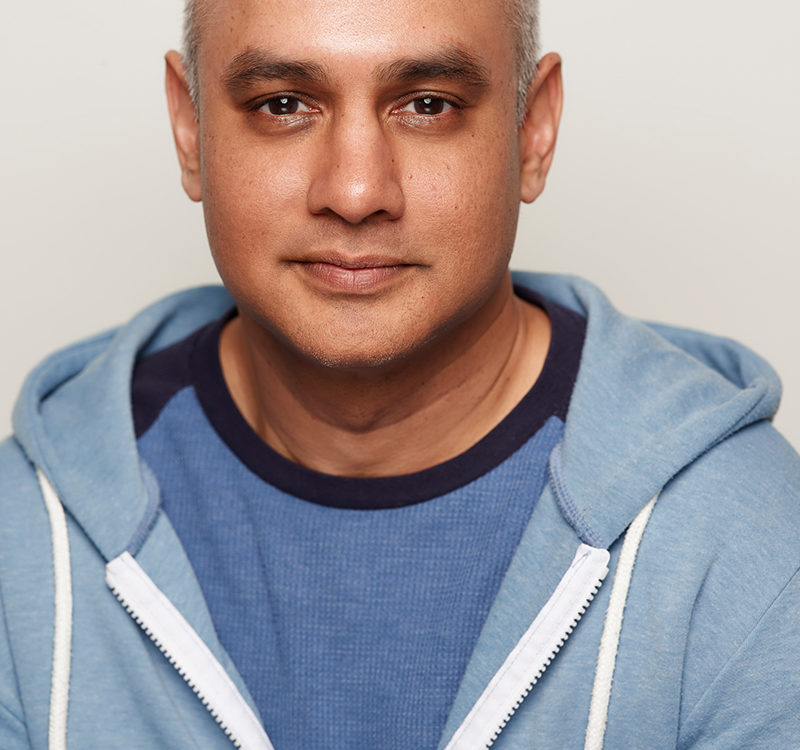 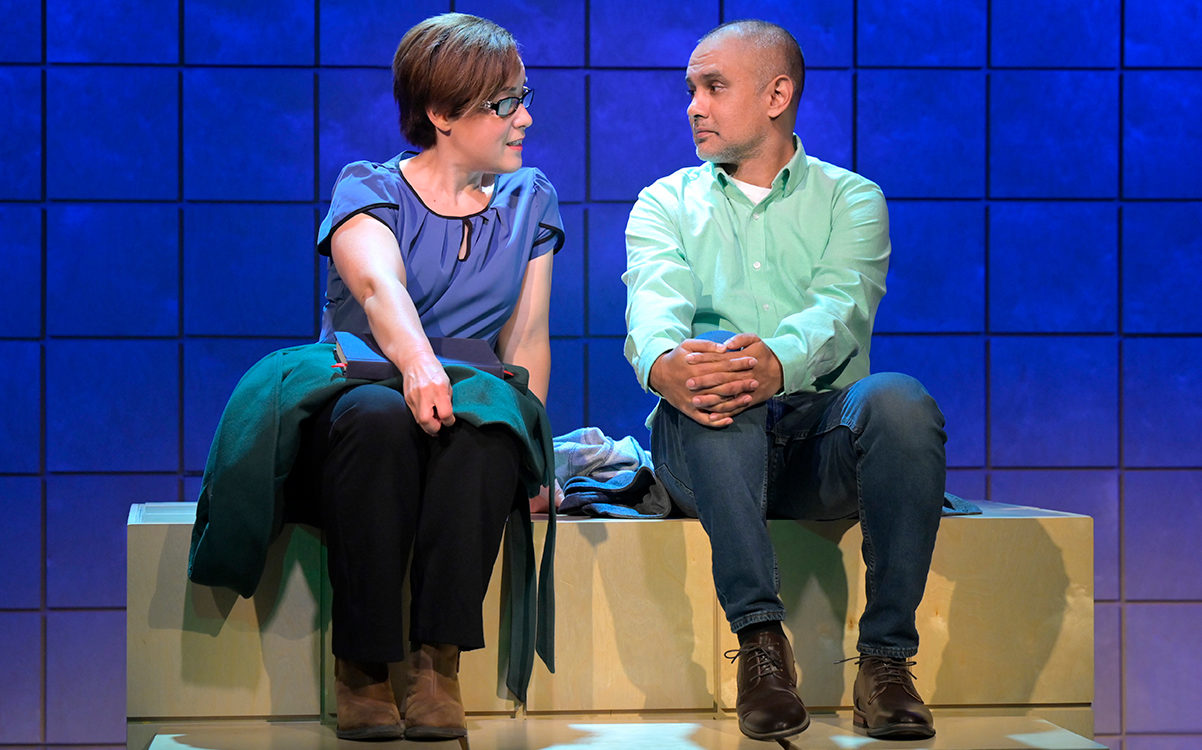 “This Much I Know” bewilders its public by immersing it in the broth of cognitive illusion. Three major plotlines and more than twice as many characters in 60 scenes, plunge us into a swirl of alternately disturbing or joyous interactions in which the characters must choose to alter their life’s path, and in so doing, confront the specter of cognitive illusion. Playwright Jonathan Spector read the book “Thinking Fast and Slow,” by psychologist Daniel Kahneman. It’s about how we are unable to change how we interpret information that we know is wrong. It inspired Spector to experiment with combining visceral, historical, and dissonant elements into one play. Rajesh Bose plays Brajesh, a professor who stewards the audience masterfully through sampling the evening’s fare, not always easy to swallow, yet a dish he serves with great gusto. I had an opportunity to interview Bose at a teahouse near the theater.

Toba Singer: How did you prepare for the role of Brajesh?

Rajesh Bose: I tend not to prepare for parts in a psychological way. I find that an understanding of the character starts with the words in the script, particularly for this play . Saying the phrase exactly as written changes who I am, so my preparation is reading the play again and again.

The book changed quite a bit during rehearsal. Since it was a first production, Jonathan revamped what he saw with an eye for what was missing and looking at it anew during each run-through. It meant learning new lines, a lot to memorize, unlearning the book and doing all the memorization again, knowing it might change yet again. You take it in stride.

It was one of the first times that Jonathan had seen the actors read live in front of him and so new ideas would come for all of us. Josh Costello, who directed, and Jonathan, would talk with us about each change and take questions: “This is what I’m thinking. Let’s give it a shot.” Then they’d change it again. Even when we went into previews, there was still tinkering.

At first there was one intermission, but as it became clear how much was being lobbed at the audience, they decided that two were necessary for the audience to absorb the material. They tweaked little moments and lines and I’ve learned to welcome the changes, even when we’re in production, because really, everything is a preview. We learn something new from each performance. It’s a continuing work in progress.

TS: The play is unusual because it launches the situational from the fault line of the audience’s cognitive dissonance. What through line do you use to draw in audience members as they process the contradictions the script lobs at them?

RB: It is so obvious that I am an Indian in Russia, that Brajesh is not like like the stereotypical Dostoevsky-drawn depressed Russian, but a character who is informative, fascinating, a communist in the true sense of the word, a kind of Russian who is not depressed, but positive, loving, happy, Puck-like. He’s the communist who embraces the egalitarian ideal, which brings him and others a certain level of joy. Sarah Rose Leonard, the show’s dramaturg, drew the character from her research, beginning with the book Stalin’s daughter Svetlana Alliluyeva wrote about her life. Sarah chose it because in it, Svetlana describes Brajesh.
Though important, what gets the role to work is not the research but the relationship with the audience in front of you. For me personally, this has been a wonderful experience. The Aurora is a wonderful company, a great place to work, and this production is unique because it massages the fourth wall in a way we don’t often get to do. It confirms the immediacy between the actor and the audience. When that immediacy is not there, the show is not as good. This play is written to highlight that; every production should have that same immediacy between audience and actors, whether there’s improv or not. The big difference here is that the show is topical and timely. It’s the kind of theater that I love to be part of, to watch, and aspire to do, because many of the most gratifying moments happened when we were in rehearsal, when there was still a lot to learn, with every moment that worked buried in the script. I say “buried,” because you never know it until it happens. During the first preview when I had to give the final monologue, I just knew that every single person was listening. That is the most gratifying thing: you’re all still here affirming our love for the work. It’s so direct, and especially because it’s for someone who was an actual historical figure and carries a certain spark.

TS: There’s a choreographic element to reconfiguring the stage for each scene’s vignette. How do you feel about the dual role of stagehand and actor?

RB: There’s a heartbeat to the show that determines its rhythm. In a very short sequence where I come in, I move a box piece and then leave. There’s something delightful about that: we’re here to create a story, and all of us are giving and doing whatever has to be done. This play, with this pace, tells its story better. If it were done at ACT or Berkeley Rep, they might want to hire a stagehand, but at the Aurora, a small intimate space, a stagehand might take away from the flow and energy of what’s happening. It’s much more dramatically efficient as it is, and allows the story to arrive In a way that is almost cinematic, as quickly and clearly and at the same pace. To do it some other way would slow it down and it wouldn’t read as well.

TS: Berkeley is the land of the woke. Many here believe, if myopically, that politics is transmitted across generations along with mother’s milk. How do you open up audiences to accepting that Harold, the son of a white supremacist, can separate himself from his upbringing, and change his outlook?

RB: Since I’m not from the Bay Area, and it is my first time here, and though people said to expect a specific audience, I brought no preconceptions to the show. It added to the excitement. For example, in the very first scene, when I ask whether there’s anyone who chose to not turn off their phone and why they made that choice, a woman raised her hand and said, “I don’t know how to turn it off.” I took her improv a step further by asking someone to help her. He didn’t know either. Here we are in Northern California, the center of cutting edge technology, and two presumably well educated audience members don’t how to turn off a phone. You let the improv go on just long enough so that an audience can respond in a way that advances the story. There’s joy in the serendipity. Preconceptions have no place in moments like that one. Each audience is different, and you have to take each as it comes. In the first monologue, where I ask whether the audience knows which is the least or most common letter in the alphabet, some of them bristle when they can’t see how they could not only give the wrong answer, but resist being convinced of the correct one. I enjoyed that, but on the other hand, there’s a feeling of “Thank you for your honesty.” Because I have such a direct interaction, I do get a reaction, sometimes boisterous, sometimes combative, and at times, funny. I want everyone to have a great time.

TS: You made your directorial debut recently. What was that like?

RB: A friend asked me to direct a show at the Luna Stage in West Orange New Jersey. I was hesitant because I knew it would be a very different challenge, but we discussed it and I said yes. On the first day, I told the actors, “I have a basic rehearsal rule that whenever actors are onstage they are having a very good time,” because it’s infectious, and that’s the bottom line for me. It was a new play and I had some leeway, so I encouraged moments of improv, “Do whatever you like to do.” As an actor, one knows that the best work happens when moments come organically. Their work made me very proud. It was one of the hardest things I’ve done because it’s such a different and next level step. If the actor is the child, the director is the multitasking parent. It asks for a specie of leadership that involves many things, including setting an example. An actor is only responsible for acting. As a director, the entire responsibility for the show is mine. It ended up being very rewarding.

TS: Did it change how you arrived for work as an actor in this production?

RB: Yes. It is one of the reasons that I have enormous respect for Josh, and the range of responsibility he assumes. I felt that I always understood this, but I hope that the experience of having done it myself makes me a better actor.

TS: Do you have ambitions to write for stage or screen?

RB: I wrote a one-person show called “When They Go Low,” a title I took from Michele Obama’s quote about the strategic burden felt by people of color: “When they go low, we go high.” It’s the story of my own experience in a dominant culture where, as a person of color, you have to be “better” to be taken seriously or even accepted. I have asked myself “Why am I obligated to ‘go high’?” and that is the script’s point of departure. It’s available on YouTube.These last two years of COVID, with other developments that have the world coming apart at the seams, and people fully convinced that they know what they know, invited the kind of thinking that inspired “This Much I Know.” It’s what drew me so fully into the interaction between Lukesh and Harold. People of color are exhausted by the growing number of hate crimes and the atmosphere that surrounds them, and no longer have the bandwidth to keep on taking the high road, when in the scheme of things, you ask yourself “Does it really make any difference to go high?” “This Much I know” is a show that offers one example of a possibility that can bring us something of substance that might make a difference in learning how it is that we know what we think we know.