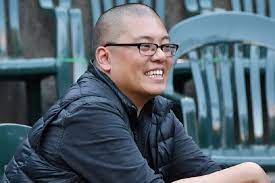 The director of Cal Shakes moves on.

In a conversation with culturevulture, Eric Ting spoke about his seven years as Artistic Director of Cal Shakes, why he’s leaving Berkeley and what he’ll miss, how he grew into a life in the theater, and his upcoming final Cal Shakes’ production, ‘Lear.’ The interview has been edited for brevity and clarity.

Tell us, please, why you’ve decided to leave Cal Shakes.

During the pandemic, my mother was diagnosed with cancer, and we lived with her in West Virginia for a year while she fought it. During that time, my wife [Meiyin Wang] was offered an opportunity at the new Perelman Performing Arts Center [on New York’s World Trade Center campus]. It’s a job she couldn’t say no to.
I quite enjoyed the administrative aspects of running a theater, but my wife had left a job at New York’s Public Theater to come out here when Cal Shakes first hired me. We had just had a child then, and she was happy to spend some time at home. It felt like the right thing is to support her now as she returns to professional life. It’s about a balance of life. That’s life, and that’s love.

Are there any Cal Shakes productions that cry out to be mentioned as exceptional?

It’s like asking to choose a favorite child. I’m partial to those I’ve been able to work on and get close to the artists. Black odyssey has to be mentioned. Marcus Gardley’s play felt like a revelation of what was possible and the kind of community we could bring together around the work. I’m so proud of Quixote Nuevo, Octavio Solis’s version of the Cervantes novel, which starred the late Emilio Delgado. And it’s played all across the country — Denver, Houston, Hartford, Boston — and continues to play.

We are a theater, not a museum. So, we don’t want merely preservation. Using Elizabethan costumes is really turning the plays into period pieces. Our job is to interpret art for contemporary audiences. Some are tied to the exploration of the artists we bring in, and some to the permission we give the artists.

How did the Lear production come about?

This version was originally a play on commission by the Play On Shakespeare initiative. The Oregon Shakespeare Festival started it, but now it’s an independent program. The original intent was to make Shakespeare’s plays more accessible to contemporary audiences. It was an opportunity to bring together 36 living playwrights who were to engage intimately with the plays and change any unfamiliar words to those that are more understandable
Play On was looking for a theater to produce the new version of King Lear, they asked the playwright where they wanted to have it produced, and they named Cal Shakes their first choice. That was Marcus Gardley. I have incredible affection for him. How could I say no?
Marcus has been doing a lot of re-writes in recent weeks, and it feels like a work by Marcus Gardley more. He adheres to the story of King Lear but brings with it a host of revelations that I always think of around Marcus’ works.

The actors must be agile to adapt to changing lines supporting the written changes.

Yes, this is what it means to create new works of theater.

I feel one’s high school experience gives insight into the adult one later becomes. What were you like in high school?

I was living in Morgantown, West Virginia, and a Chinese American. My parents were both immigrants. I was the only Chinese American in my grade level. It was not the most diverse community. My Dad would read Shakespeare to me. It was a way that the family connected around language. My childhood was not traumatic or burdened. But I was othered. And I couldn’t be all that I am.
It meant that I tried not to draw too much attention to myself. I was a big introvert and a visual artist growing up. I would walk around with a sketchbook and make intricate drawings to free my imaginative life. I did have academic opportunities to step out of my comfort zone. My first time as a performer was doing science/magic shows in preschools across West Virginia.
In college, I was able to start over again and evolve. How we need and invite change and meet it is the test of who we are.

What would your classmates think about you now?

They’d be shocked that I was in the theater. I admired the theater crowd then but felt far away from those creative forces. When my Mom heard that I wanted to go into the arts, she said I should do the things that make me happy.

Any final messages to culturevulture readers?

Cal Shakes exists because of the Berkeley community, where Cal Shakes began. I love that Berkeley people take pride in being a part of our community. There is a rich cultural community of Alameda County residents who practice their art with a sense of justice at its core. Truth has been spoken to power here. Also, I love the Berkeley Kite Festival and hope it can continue.
Berkeley is a beautiful place to live. It’s been a gift to call the Bay Area home. It can spoil you. Thank you, Berkeley.