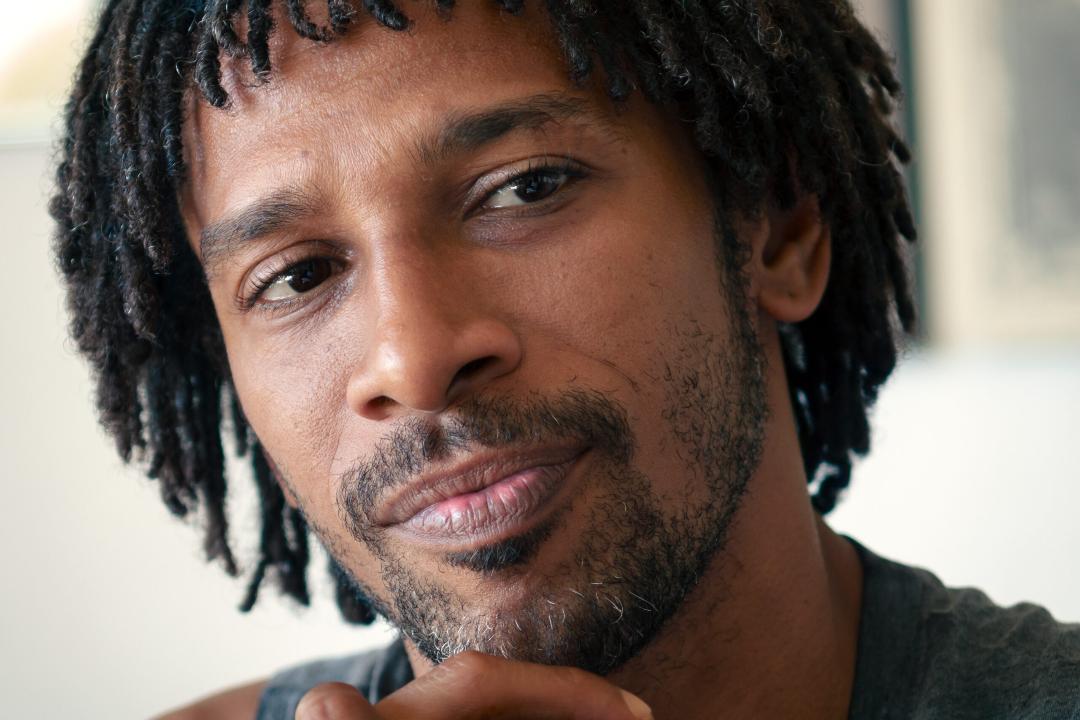 Toba Singer: Why “The Turntable” at this moment in time?
Osnel Delgado: Some history…

Ten years ago I met Celia Fushille in Havana. At that time I was working with my father after having left Danza Contemporanea de Cuba, and the idea came up that at some point I would get to know Smuin Ballet and work with its dancers. One meets so many people throughout the years that I did not even remember Celia when she showed up again in the conference room of the Joyce Theater in New York, where Malpaso was in its season during one of our many US tours. She had not forgotten her dream and proposed that once and for all I make it out to San Francisco, and so in 2019 I visited them, and in 2020 the process began, but was interrupted by the pandemic. Two years later, all the earlier material and conversations shaped this work. It was something created especially for the company and not only in the way in which I work but also in the way I see them and what I think they need to continue growing.

“Turntable” is a work in which everyone has to look at each other, in which the spectator is involved as an observer but we are not dancing for them; we dance for ourselves. A central character and several stories intermingle in the vortex of life, from one song to another, they are lost and found.

TS: Since it is (literally) central to the work, why do you use it so selectively?

OD: It was very interesting to work with this circular structure, and I am not referring only to the center [where a turntable is set on the floor] but the work itself. There are no fronts, only entrances and exits. As an effect, it is very powerful but best when not an approach taken the whole the time. I tried to nuance it so it wouldn’t become boring, and though I consider it the driving force of everything, sometimes to find meaning in things, you have to take your distance from them. As in real life, we cannot find everything within ourselves, not even in one single place. . .

TS: In the spoken word segments and the music, the theme of waiting for a lover takes on increasing urgency, starting at the beginning of the piece with a plea to come back and becoming more pointed and insistent until we hear “If you don’t come back, I’ll die,” where the movement is heart-wrenchingly imploring. Did that lyric/story drive the choreography or did the steps inspire the spoken word?

OD: I always liked the song. It was one in the selection of music that I decided to use to make the piece. I wrote the reflections during the pandemic. I never thought about using them, but well, my teachers say that everything can be serviceable. I think that recording and using them was successful but quite a challenge; it was hard for me to get used to hearing my own voice but in the end, it took shape within the process. Things have to be worked out or else they work themselves out. Text, movement, and song make an interesting combination that I had never explored before, and it helped me to give voice to the absence of the other, the one who is not the central character, but something that cries out. We all need someone’s affection and company.

TS: What choreographic themes, life themes, and desires occupy your thoughts that there hasn’t been time to pursue?
OD: Many, all, the things I want to say are various and infinite. I am interested in what is going on, and human experiences, the stories, but what I like the most is connecting with different people, building material through which they can express who they are and where they come from. In the end, what I want is not as important as what we are all capable of building, as part of a collective experience, which is the way in which I can define my process. It always changes and is always in the here and now.

TS: What have you learned in the process of collaborating with other choreographers, other companies?

OD: A lot, and I would even say that I have gotten something from each one of them, I have learned from everyone with whom I have worked. I am the result of all those collaborations and also what my teachers and colleagues have imparted. But then you have to find something to say beyond all that, find new motivations. For me, the most important are those with whom I live day to day. They are my source of inspiration and on who I base my own stories, those from who I learn more than I can deliver.

TS: The 2022—23 season is Malpaso’s tenth anniversary. In some ways, it’s only a number, but in others, it’s a resonant decade of living its name as a company in rebellion against a proscription, a warning that by leaving the company you were in and starting a new one, you were getting off on the wrong foot. What does your present self as a choreographer who has absorbed so much experience of that decade want to say to your younger self who was just striking out on his own ten years ago?
OD: It is very interesting to put things in that perspective. I would be tempted to warn him about a couple of things, but again, each one must make their own mistakes and learn from them. Malpaso is the opposite of what dance is supposed to be, but you must fully go for it to find your way. That is the philosophy of our group as well as in our collaborations with different artists to help the growth and development of each of the participants. I would only say to him, “Remember that even though you may run the race individually, nothing is achieved without help. Enjoy, share, and continue dreaming.”