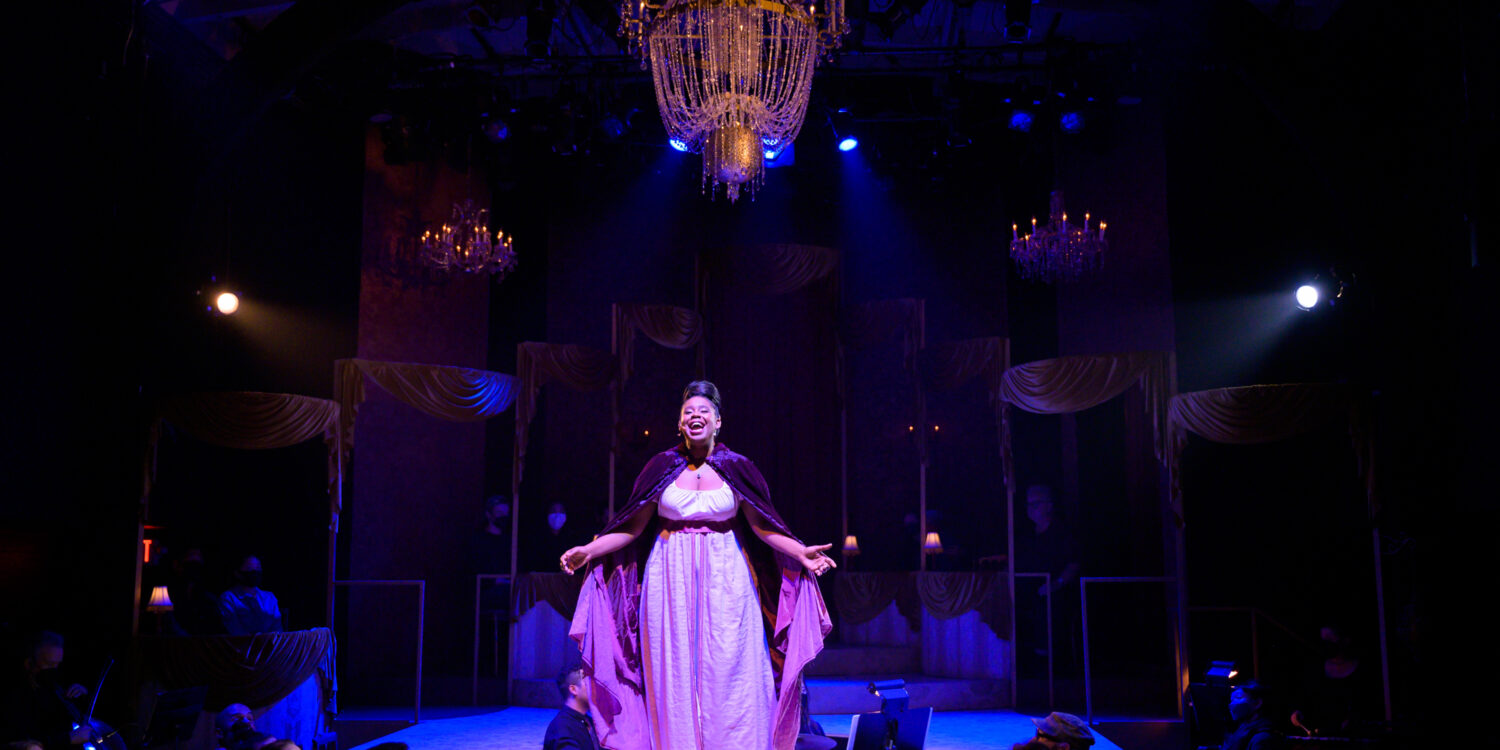 The Broadway electropop opera “Natasha, Pierre & the Great Comet of 1812” (“The Great Comet”), by renowned music creator Dave Malloy, is celebrating its West Coast premiere opening at Shotgun Player’s Ashby Stage Theater on November 12, 2022. This sung-through musical is based on a scandalous slice of Leo Tolstoy’s “War and Peace.” Shotgun’s theater will transform into a 19th-century Russian nightclub, with cabaret tables, Russian vodka, and an immersive and unique theatrical experience. Patrick Dooley, founding Artistic Director of Shotgun Players, is co-directing The Great Comet with Erin Mei-Ling Stuart.

Dave Malloy and Patrick Dooley talked about the production. The interviews have been edited for brevity and clarity.

What made you choose that specific section of War and Peace on which to base The Great Comet?

When I first read the book, that section immediately cried out to me, and I thought, “That is an absolutely perfectly structured piece of musical theater.” When I started working on it, I had to use a couple of other little sections of the book to make a few more characters more accurate.

What inspired you to set “The Great Comet” in a cabaret or immersive style?

It was inspired by a trip I took to Russia. I ended up at a tiny café called Café Margarita, just a perfect Russian café with wooden tables. Everyone was drinking vodka and eating perogies. A classical pop trio played Flight of the Bumblebee in the corner. I felt that the environment was so perfect that it was where I wanted to place “The Great Comet.” Also, it had to do with Tolstoy, how he celebrates life, and the music is a celebration of life. “War and Peace” has thousands of characters. The audience wants to be part of the show and talk about life and its diversity.

Did you read Russian literature and listen to Russian music growing up?

In high school, I first heard Rachmaninoff. He was the first classical composer I loved. I got into Stravinsky, Shostakovich, Borodin, and those guys in college. And I read the heavy hitters of Russian literature, Tolstoy, Gogol, and such.

When did you first read “War and Peace?”

I was working on Celebrity cruise ships, playing piano, when I read it. I was in my 20s, and it was a fantastic way to see the world. It helped me musically with my sight reading. I was in the band that did big production numbers and some small jazz combos.

You’ve done quite a few Russian-themed productions. What made you interested in them?

Yes, I have a Latvian background. Aesthetically I respond to Russian music and Russian literature. I didn’t imagine using so many Russian-themed works, but I’m drawn to it.

How many productions of “The Great Comet” have there been?

The licensing just became available in the States, so a bunch more are coming out. I saw productions in South Korea, Japan, Brazil, and Ecuador.

We’re all excited about seeing “The Great Comet.” How have you reorganized the theater?

We’ve removed the first five rows of the normal pew-seating, and we’ve extended a catwalk that extends to the stage. On either side of the catwalk, we have café tables, cabaret style. Because it’s a sung-through musical, the piano is right in the middle of the set with the drums. The woodwinds, strings, accordion, glockenspiel, and other instruments are also on the stage. There is a scene in the play about an opera, so our designer put opera boxes on the set that audience members can actually sit in. A drawing on the website shows all the details, so people can order seats where they prefer.

What seats do you prefer?

The opera boxes and cabaret seats are fun if you want to be in the center of the full-on immersive experience. But make sure to get tickets early. We’ve never had a show that’s selling like this one. There is impressive demand. We’ve already extended ticket sales into January, and it could run longer.

Do you think the high demand is because your audience is familiar with Dave Malloy’s work or because “The Great Comet” played successfully in New York?

It’s all of the above. Also, there is a lot of excitement about musicals, especially this time of year. Our opening and closing shows are our biggest productions and always generate excitement. We opened this season with “Passing Strange.” Other big openings and closing shows were “Arcadia,” “Black Rider,” and “The Coast of Utopia.”

Do you think Shotgun will do more musicals?

Musicals get into your heart and imagination differently than the spoken word. We are definitely doing one next year and likely in 2024. But Bay Area theatergoers demand and deserve a wide range of entertainment.

It must be an expensive production. Have you to had to raise ticket prices?

“The Great Comet” is more than twice the cost of any other show we have done. But we still have 25 years or under tickets for $5 and community tickets for $15. Most of our tickets for this one are in the 30- or 40-dollar range, but that’s what other theaters charge. We solicited sponsors, and that was a massive boost for us. It’s hard for any theater to make your money back from tickets. We want people to come back to the theater and enjoy the experience.

Have you found that your audience is coming back to the theater?

It’s been slowly getting better. “Man of God” did very well. People are getting more comfortable and are having fun. They’ve had all their booster shots, and virus numbers are down. People were out of the theater habit because of the pandemic. This show is a big theatrical, exciting celebration of love and humanity. The emotional payoff to your spirits is essential.

Has Dave Malloy had any input into this production?

Yes, a lot. I exchanged emails with him today. I saw “The Great Comet” from its off-Broadway beginning and all the different iterations of characters, theaters, compositions, lyrics, and arrangements. There were some songs I had a real fondness for in the first production, and he’s allowed us to use the original versions. There was one song that was cut from the Broadway version of “The Great Comet” that Dave has agreed to let us use at Shotgun. Dave also okayed changes in the arrangements slightly to suit our cozy theater.

How would you describe Dave Malloy?

Dave Malley is a local boy who made good. He got his start composing for Shotgun and other Bay Area theaters. There are a lot of people who have known him as a composer over the last 20 years. Shotgun got the rights to the West Coast premiere of The Great Comet because he appreciated us and wanted us to get some love.

Dave is a friend of the artist. Art is first for him. His website is open-source. Even with his greater prestige and accomplishment, he’s still the same Dave. His work is authentic, and he cares about the integrity of his art. He remembers his old friends and helps them when he can. He’s a mensch. Dave’s in London now but will be back to see the show and hang out with his old friends.

How would you characterize the essence of “The Great Comet?”

This play is about the significance of love. We’ve been cut off from other people in the last few years, including half of our faces being covered. “The Great Comet” celebrates our humanity. There is a lyric in the song “Dust and Ashes:” “They say we are asleep until we fall in love.” That has haunted me. On some of our days during the pandemic, we were sleepwalking. The song reminds us that we need to show grace. When we have connections, our flowers are more in bloom. We need human relationships to be our vibrant selves. The play is a theatrical manifestation of a celebration, a party. We will toast to life and love.

Conductor Roderick Cox made his Philadelphia Orchestra debut with a vibrant program Jan. 13-14, in Verizon Hall with works by...
Features