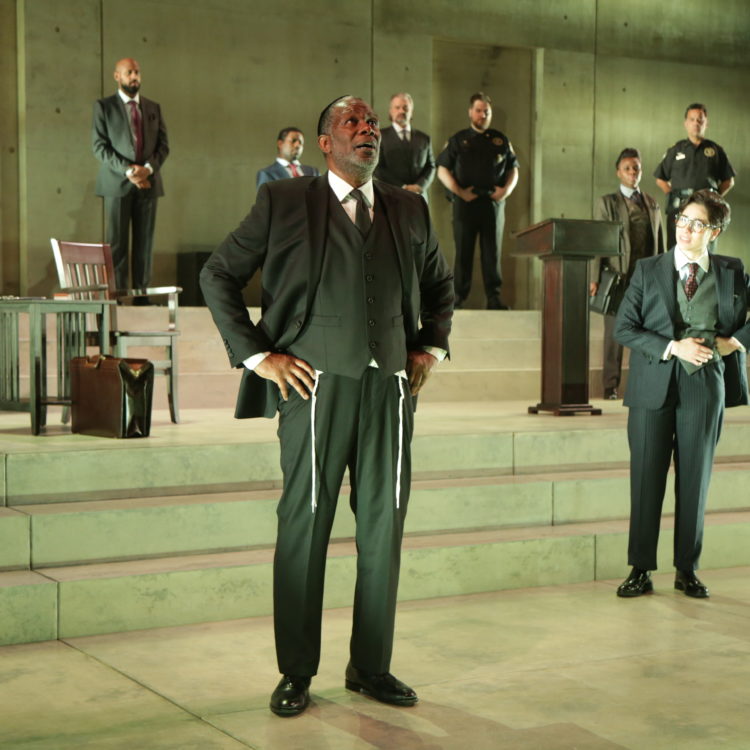 John Douglas Thompson and Isabel Arraiza (front) and the cast of The Merchant of Venice. Photo: Gerry Goodstein

A Portia for our time in TFANA's "Merchant of Venice"

The Merchant of Venice
By William Shakespeare
Directed by Arin Arbus
Featuring John Douglas Thompson
Theatre for a New Audience through March 6, 2022
The Shakespeare Theatre from March 22 to April 17, 2022

Theatre for a New Audience’s searing and brilliant new production of “The Merchant of Venice” (a co-production with DC’s Shakespeare Theatre) features starkly unrelenting direction by Arin Arbus and a stunning and deeply nuanced performance by John Douglas Thompson as Shylock.  I have never seen a production of this play in which the problematic aspects of the play are so unwavering – particularly the anti-Semitism, racism, and xenophobia, all of which are inescapable and rooted solidly in the text. Each and every character is exposed – flaws and complexities appear alongside their better qualities.

Ms. Arbus doesn’t even spare Portia, one of the noblest of characters in the cannon. Her casual racism comes as a shock even though the same words are uttered in every other production of “Merchant”; in this context, they make the audience gasp. That the play could not be more relevant to today’s times does not make it easier to watch but it is essential viewing and an overall mesmerizing theatrical experience.

Making her debut as a Shakespearean leading lady is Juilliard graduate, Isabel Arraiza, who most recently appeared in the noir thriller film “The Little Things,” which starred Denzel Washington, Jared Leto, and Rami Malek.  We spoke to Isabel about taking on the role of Portia, acting opposite the great John Douglas Thompson, and her hopes for the future of Latinos in the theater.

Most recently, you’ve been working in film and TV.  What made you decide to come back to the stage for this show?

As I imagined my career as an actor, I always envisioned my life moving from acting in front of the camera to stage and vice versa. The process of storytelling for both mediums is so different, and I truly missed the thrill of theater, the immediate connection with a live audience and living through the journey of a character from beginning to end. Stage work, specially Shakespeare, is a way of keeping my acting muscles in shape, and going back to basics when it comes to craft and training. It had been years since I was last on stage, and I was truly yearning to return and connect with my first love!

Portia is one the most iconic parts in the theater. And in this production, you are playing opposite someone that many consider the greatest classical actor of our generation.  How did you react when you were offered the part and how did you prepare for this role?

We had begun an exploration of this play back in the spring of 2021 with a virtual workshop. For an entire week, some of us (including the great John Douglas Thompson as Shylock) worked on investigating and discussing some of the most troubling scenes of this play with the aim of having a virtual presentation of those same scenes at the end of the week. Never in my wildest dreams did think I that months later, I’d be offered the role of Portia. I was both thrilled and ravenous to start preparing for it, especially since I was going to be in the company of such brilliant artists. It was time to step it up! As part of my preparation, I read the play many, many times before I showed up to the first day of rehearsal. I coached vocally for it as well,  and took Alexander technique lessons to create her movement. I also read about other actresses and their approach and understanding of Portia. And then rehearsals started and at that point, it was about bringing to life a Portia that made sense in this exploration of The Merchant of Venice. Arin Arbus had a very clear and sound idea of what she wanted for this character. Through constant conversations with my director, it was clear that we were interested in creating a unique journey for Portia, that goes from an “unlessoned girl, unschooled” to someone that comes to understand that this could be a very cruel, and scary world. An upsetting and realistic coming of age.

Were you familiar with John Douglas Thompson prior to working with him?  What is it like to perform with him?

Everyone knows JDT! Especially in theater circles in NYC. He’s a legend! However, I was lucky enough to have previously worked with him in my first professional job back in 2017 in Oscar Eustis’s Shakespeare in the Park production of “Julius Caesar.” It’s been such a gift to reconnect years later in this production. I think of him as my godfather of theater, although I don’t think he knows that. To work alongside him is a masterclass of both acting and generosity of spirit. He’s so gifted and such an extraordinary scene partner.

Arin Arbus is such an exciting director. She takes epic plays and makes them feel very intimate and personal.  Can you tell us how she approached the text and in particular your character?

I’ve been a fan of Arin’s work for years, and finally getting the opportunity to work alongside her, reaffirms my admiration of her brilliant take on things and her directing technique. It was very clear to me that Arin was interested in leaning into the ugliness of all the characters and shine a light on how problematic this world that Shakespeare created is. Unfortunately, it’s not too removed from our world. I believe that was something Arbus wanted to bring out in this specific way of telling the story. In terms of Portia, we decided to bring out all of the complexities that make her such a rich character. We were certain that we did not want to portray her in a heroic, romantic manner, but a character that was complex, flawed, and at times extremely troubling and problematic.

What makes this production different from prior productions of “The Merchant of Venice”?

To be honest, part of my research was to read and watch other versions of “Merchant.” The only live production I had seen, was in my second year of acting school, and it was a very different take on our version of “Merchant.” As I mentioned before, I think our exploration investigates the ugliness that humans are capable of. Who’s the system for, who benefits from it. This play was published in 1600, and after this staging of it, I’ve come to realize, unfortunately how timely it is.

“Merchant” is often seen as a problematic play, yet the themes of the show are, sadly, very current.  Are there moments in the show that you can sense the audience’s discomfort and does that affect your performance?

I sense the discomfort every night, from the moment the characters start speaking. The discomfort just grows as the play keeps going. By the end it’s just a shattering and haunting energy that lingers on the stage. I feel the audience’s discomfort, as I also feel mine while doing it. However it doesn’t affect the performance, on the contrary when I hear reactions from the audience, it reaffirms for me that they are listening. I want them to see through our performance, humans are capable of doing this, you are capable of this as well. I am an extension of you as much as you are an extension of me.

The theater is going through a huge shift right now, in particular with issues of representation. Do you feel that there are more opportunities now for Latinos in theater and film?  What is your hope for the future of Latinos in these fields?

I’ve been incredibly lucky to have had consistent work since graduating from acting school. However, for a population that consumes so much media as Latinos do, we as a community are underrepresented and have not been prioritized. Numbers show that “only 4.5% of 47,268 speaking roles” go to Latino actors. There’s an incredible market for us that has been untapped. And my wish for the future is that these opportunities that I’ve been fortunate enough to have, don’t feel like luck or fortune, but because we deserve it as professionals, we deserve to tell our stories and to have the same opportunities in front of  and behind the cameras, on stage and behind the scenes.  We have everything to offer. I am hopeful.

The Merchant of Venice plays at Theatre for a New Audience until March 6, 2022 and continues at Washington, DC’s Shakespeare Theatre from March 22 to April 17, 2022.