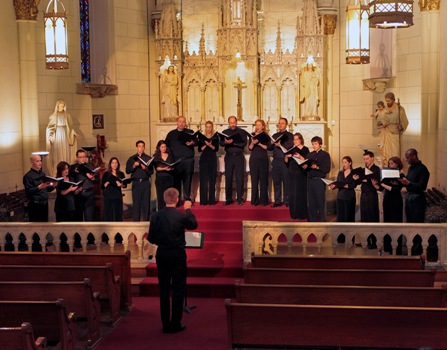 A Chorale Blooms in the Desert

The Desert Chorale’s 2011 summer season offers five different programs—everything from the “mountaintop experience” of Bach’s Mass in B Minor, presented at the Lensic with a 27-piece Baroque orchestra performing on period instruments, to an intimate concert at Loretto Chapel with five centuries of songs about war and peace. “I like people to come away with an experience,” said Joshua Habermann, the director, on the phone from Dallas, where he recently moved to take a new position as director of the Symphony Chorus there.

The chorale brings in 24 professional singers, who travel from around the United States and Canada to join the group for the summer season. Composer-in-residence Robert Kyr, whose commission for the chorus, “Tides of Peace,” premiered on July 7, said, “Very few choruses are at the level of the Desert Chorale. Their sound is very rich, full and expressive. I can start at a deeper place [as a composer]; they’re capable of expressing the widest range of human emotion.”

“Great Cathedral Music: The Spirit Soars” (July 7 and 29, Aug. 3 and 12, at 8 p.m. at the Cathedral of St. Francis; also in Albuquerque, Aug. 7, 4 p.m., at Immanuel Presbyterian Church) opens the season with a concert of sacred music that includes a constructed Mass. Habermann calls it, “Missa Eclectica”—he has chosen different movements written by different composers over the last hundred years to create one complete Mass. The Kyrie will be by Ralph Vaughan Williams, Gloria by Franz Herzog, the Credo by Frank Martin, Sanctus by Frank Martin, Agnus Dei by Stephen Leek and Ite Missa Est by Carl Rütti.

The concert will also offer a more ancient and famous work, Gregorio Allegri’s “Miserere, Mei Deus,” which was so admired by Mozart that he copied it by memory after attending performances. At the time, the Vatican was withholding the music from the public domain—treating it, as Habermann put it, as a kind of trade secret. The piece is written for a three-part choir that sings in the front of the cathedral, and a four-part group in the back. For sopranos, in particular, the piece is like “pole-vaulting 19 feet,”—there are five high-C’s, Habermann said. Not to worry, however. “We have two women who can handle it.” The concert will also initiate what the director calls, “The Bach Motet Project.” He plans to present all the composer’s motets over the next few years. The first, this summer, will be No. 2, “Der Geist hilft unsrer Schwachheit auf,” which is “virtuosic and difficult.”

Robert Kyr’s new piece, “Tides of Peace,” will close the concert. On July 21 and 26, and again on Aug. 5 and 11, audiences will have a second opportunity to hear the work, in the more intimate setting of Loretto Chapel, as part of the “Songs of War and Peace” program. “The piece is a summation of the work I have been doing for years about war and peace-making,” Kyr said. “I conceived it for two spaces I know really well (Kyr has been coming to Santa Fe since 1993 and composed a piece last season to celebrate the city’s founding).

“Tides of Peace” will be performed by a chamber chorus of 16 at the chapel, and a group of 24 voices at the cathedral. “I wanted to do it in two different acoustics, with two sizes of chorus,” he said. Kyr explained “Tides of Peace” begins with a representation of the Civil War in all its unspeakable horror (“O War, Red War”) but later travels to an elegiac dream, where the remembrance of the dead suggests the beginning of the process of recovery. The piece finishes with images of the sea, the poet standing on the shore looking out, a suggestion of peacemaking, of moving beyond conflict. “For me, music connects us internally to the resources we need to create reconciliation in the world,” he said.

Perhaps the most ambitious event of the chorale’s season will be the performance of Bach’s Mass in B minor, accompanied by baroque orchestra (July 15, 8 p.m., at the Lensic in Santa Fe; July 17, 4 p.m., at Immanuel Prebyterian Church in Albuquerque). Written near the end of the composer’s life, the Mass served not only as a summation of an entire career, but, according to Habermann, as an ending to the 150-year baroque period (1600-1750). “Bach changed world history,” he noted. Afterward, as Mozart and Haydn came along, they were almost required to do things differently, he said. After the Mass in B minor, there was nothing left to be said. The classical period began as an aesthetic response. (“The Mass in B minor is as lofty in design, scope and expression as anything written by the hand of man,” wrote Ted Libbey for NPR Music.)

For the Bach Mass, Desert Chorale will join forces with Santa Fe Pro Musica orchestra (whose violinist Stephen Redfield will serve as concertmaster). Bach himself never lived to hear the piece played in its entirety. Sections were written during different periods in the composer’s life, and the piece represents a variety of styles, all joined into a whole that Habermann calls the “pinnacle of choral masterworks.”

Moving from the sacred to the secular, two programs, “Songs of War and Peace” (at Loretto Chapel July 21 and 26 and Aug. 5 and 11) and “Icons: Music by and about Famous Women” (July 28 and Aug. 6 and 10, at Santa Fe’s Scottish Rite Center) will offer pieces in a more thematic vein. For “Songs of War and Peace,” Shawn Crouch wrote “Lullaby” to depict an Iraqi father trying to send a frightened child to sleep in the midst of bombing. “L’Homme Armé” is a Gregorian chant, also dealing with war. In the “icons” program, Georgia O’Keeffe will be represented lyrically in a musical setting by Judith Cloud of a quotation attributed to the artist: “I hate flowers. I paint them because they’re easier than models and they don’t move.”

Habermann is not only celebrating the image of the feminine in the “Icons” concert, he is celbrating the women of the chorus. In “Mirjams Siegesgesang,” by Franz Schubert, he is giving each of the five sopranos a turn at the solo lines. Similarly, in “Magnificat,” by Ralph Vaughan Williams, each of the five altos will take over the solo parts. Jennifer Higdon, the 2010 Pulitzer-prize winning composer from Brooklyn will be represented in the concert with excerpts from her piece, “Southern Grace.”

On Aug. 4, the chorale will host, “A Little American Night Music,” with guest singer (and part-time local resident) Patricia Racette, one of opera’s leading sopranos who is also known for her recordings of popular music and show tunes. The program will be part of a gala evening at Encantado resort (including a dinner re-creating the menu Encantado chef Charles Dale created at the White House when President Barack and First Lady Michelle Obama hosted Hu Jintao, the leader of the People’s Republic of China, who had requested an all-American meal). The Chorale will present American music as well, with a program of folk songs and spirituals to complement the solos by Racette.