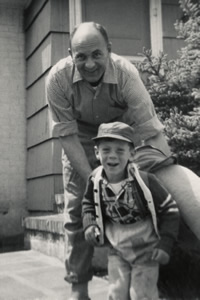 A documentary filmmaker who mainly supports himself by filming weddings, Doug Block spent his spare time filming his own family, including his mom and dad, Bill and Mina Block, married for 54 years and still living in the same house where they raised their three children. Luckily for us, while filming his parents, Bloch stumbled upon a story for the ages, and had the courage and artistic inclination to chisel it into an unadorned masterpiece.

The film opens with shots of Doug’s mother going about her business at home with her son following her with a camera. She is about 80, and her relaxed and joking manner show us that she has a good relationship with her son, and she’s used to him filming her. Doug’s father, on the other hand, is a different story. The strained relationship between a son and his silent father, and an easy rapport between a mother and son—all this just seems like typical family dynamics. Only a few scenes later, however, Doug reveals to us through a voice-over that his mother has just died suddenly of pneumonia. Her death hits us like it must have hit the family, leaving us in a state of shock.

No sooner have we adjusted to the news, when we find out that Doug’s widowed father has taken a trip to Florida to visit his former secretary of 30 years ago, and announces three months later that he is going to marry her and move to Florida. In the space of barely half an hour, we find Doug Bloch filming his father’s wedding, and we see him toasting the newlyweds with an awkward speech that only adds to the confusion when he suggests that his dead mother would have approved of the marriage.

The three children are stunned by their father’s hasty desire to start a new life, and they begin to wonder just how happy their parents’ marriage was. It turns out that Mina Block was a voracious writer, and when the family starts cleaning out the house at 31 Birch Street to help their dad move out, they find dozens of notebooks full of journal entries she wrote—documents revealing her most private thoughts during decades of her life, much of it about her relationship with her husband.

It is the discovery of these diaries that allows Doug Block to find the truth he’s been looking for—his parents’ marriage had not been a happy one. The reasons for this are suggested in a series of mini revelations, none of which alone can explain the discord, but all of them together helped keep the marriage from mending. What makes the film so devastatingly honest is Doug Block’s refusal to find fault with either of his parents. The glimpses he gives us of Mina’s sometimes vitriolic confessions are tempered with empathy for a woman trapped in her own personal struggle for meaning in her life. The film also encourages Bill Block to finally emerge from his lifelong role as the stoic husband who retreats in his career and his workroom, and talk about his marriage with more candor than he would have otherwise. In the end, neither of them knew how to fix the marriage. The only recourse was just to stick it out. By the film’s end, Bill and Mina Block become poignant illustrations of Thoreau’s observation about how people end up living lives of quiet desperation.

There isn’t a fiction film around that can duplicate the narrative eloquence of Doug Block’s story once it found the character Mina revealed to him through her diaries. Mina is straight out of Chekhov, or even Flaubert—the disillusioned housewife who seeks release, freedom, a feeling that she is living and not merely existing, through any means of exploration available to her—psychotherapy, adultery—anything, that is, except a career, or divorce, two avenues that women of Mina’s age did not find it easy to consider.

Doug Block has given us a brilliant autopsy of his parents’ marriage, and in so doing has given us a bounty of insights into the struggles that can beset any marriage, even the best ones. His story will seem familiar to many of you. How many of us out there have parents whose marriages have something in common with Bill and Mina’s? How many of us out there fear that our own marriages could end up like Bill and Mina’s? If it is the objective of a work of art to hold up a mirror to our own lives, then “51 Birch Street,” in all its makeshift craftsmanship, is a great work of art.