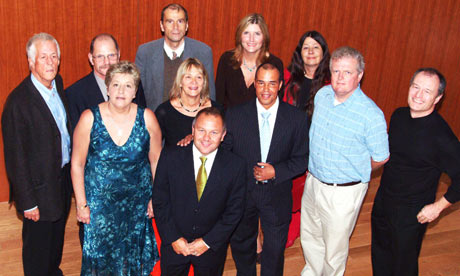 The cast of real characters in 56 Up

Nearly a half century ago, British director Michael Apted directed “Seven UP,” the first of what would become a series of films chronicling the lives of 14 children. Every seven years, the “children”—by now middle-aged—have been interviewed on film. “56 UP” is the latest in the series.

It’s rare, and satisfying to our basic nosiness, to be able to watch the unfolding of a life, let alone a baker’s dozen lives (one person has dropped out), from childhood to maturity in the space of a couple of hours, but that’s what Apted has provided us with. Each person’s background is given in short excerpts from the previous interviews. So, for example, we see Neil as a bright, upper or upper-middle-class child and follow him through adolescence, dropping out of college, homelessness, and to his current situation: a penurious but apparently stabile life as a small-time politician and lay minister.

Neil’s is the most shocking and unexpected of the characters’ fates. Never married, never in a stable relationship, a former mental patient (it’s strongly hinted), feeling unappreciated for his writing, Neil has turned out very differently from what one would have anticipated from the well-dressed, well-spoken seven-year-old.

Others are also living different lives from the ones they seemed to be headed for. Rascally Tony, from London’s East End—not an upscale part of the city—fails in his early attempt to become a jockey and seems destined for a bad end. Instead, he becomes a cab driver, marries, has three kids, and buys a vacation house in Spain.

Like several other subjects, Tony’s life is affected by the recession (you wonder how he’ll keep up the payments on both his London and his vacation houses). Also like several others, his family doesn’t entirely fit the conventional mold: Tony and his wife are the caretakers of a grandchild.

Many of the subjects have been divorced, have remarried, and live in blended families. But the number of their children tends to be small, with the exception of Symon, the only mixed-race subject, who had five children with his first wife—and, with his second wife, becomes a foster parent to many. Though almost all of Symon’s friends and associates are black, the subject of race never comes up in his conversation.

Michael Apted, a prolific director whose work also includes “Coal Miner’s Daughter,” “Gorillas in the Mist,” and many other films, set out in his UP series to show that the British class system was still alive and well back in 1964. Some of his seven-year-old subjects were nattily dressed in school uniforms and spoke upper-class (not to say prissy) English; others grew up in “council flats”—what we call the projects—and spoke cockney slang.

And today? John and Andrew, among the upper-class kids, have become a barrister and a solicitor respectively (no, I don’t know the difference either) and are happily married fathers. Yes, there’s still a class system, says Andrew, though he himself would not have been able to attend Oxford without a scholarhip. On the other hand, Jackie, an East Ender who was married by 21, divorced by 35, and lives on disability, has three children by different fathers (none that she was married to); one of those children is himself a father at 19. Not everyone has transcended the class/wealth barrier.

Not all of Apted’s subjects are happy about being repeatedly interviewed. Neil, the once-homeless man, is reluctant to reveal too much. Some complain about the superficiality of the depictions, but Nick, an Oxford grad, thinks it’s “nifty” to portray people over time. Suzy, though she hates it, says she has a “ridiculous sense of loyalty.”

“Give me the child until he is seven and I will give you the man,” goes a Jesuit saying which supposedly inspired Michael Apted. Watching “56 UP,” we have to wonder about the accuracy of this notion, even as we marvel at the number of women whom the wonders of chemistry have turned blonde, and about how our own lives would or will look in either retrospect or prospect—depending on our age.