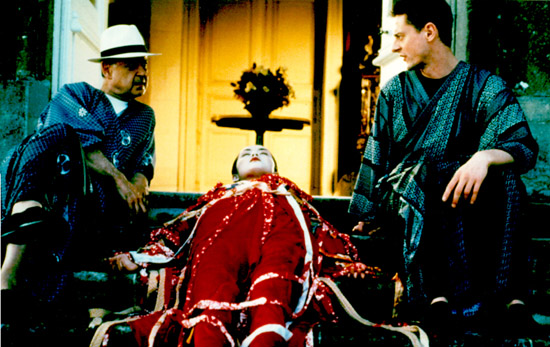 Peter Greenaway&#146;s 8 1/2 Women begins on a grief note: the immeasurably rich Philip Emmenthal (John Standing) beckons his son Storey (Matthew Delamere) home when Storey&#146;s mother dies. The older man is inconsolable, and father and son spend their days after the funeral floating through their vast Geneva estate, trying to come to terms with their feelings. Their thoughts become increasingly preoccupied with their (mostly sorrowful) feelings about sex, and after Storey takes his father to see 8 1/2 in an attempt to distract him, the two men spontaneously gather together a harem of women who (like those in the Fellini film) represent various female archetypes. A free-thinking sensualist (Polly Walker), a fallen-away religious novitiate (Toni Collette), a woman who&#146;s transferred her feelings for people onto animals (Amanda Plummer), a starchy business advisor, a scam artist, a glacial beauty who rents her womb out to high-flying couples &#150; the harem grows to eight in all, or eight-and-a-half counting the legless Giulietta.

The Emmenthal fortune is built on Philip&#146;s work as a large-scale debt collector, and the two men believe that their financial power gives them control over the women. But Greenaway&#146;s film is (among other things) an exploration of money&#146;s corrupting effect on sexuality and culture, and the women are not the powerless creatures the men imagine them to be. 8 1/2 Women is about how the worm turns for Philip and Storey Emmenthal when the women mobilize themselves in unexpected ways. (Only a couple of the women are really developed as characters, and some of them are barely developed even as archetypes, but together they provide Greenaway with the bodies he needs to fill out his beloved group tableaux.)

Peter Greenaway&#146;s movies usually sound more interesting than they are to sit through, and 8 1/2 Women is no exception. Scorning conventional narrative and character development, his film amalgamates cinema, literature, and the plastic arts into a text that has to be intellectually "read" rather than a story that&#146;s emotionally experienced. 8 1/2 Women has its emotional interludes, as when Storey tells his father to get undressed because he wants to see "what I&#146;ll look like when I&#146;m 57," or Philip, lost in his memories, does an impromptu soft-shoe to the tune of "Chicago," but such moments are fleeting. More typical are sequences in which the action is interrupted by close-ups of a cacophonous Pachinko machine, or in which the screenplay (accompanied by a "Section" number that defies explanation) suddenly appears superimposed over the corresponding part of the movie, or a scene in which two household maids share a long gossipy conversation that evaporates before it reaches your ear.

Greenaway&#146;s ultra-rational approach to art doesn&#146;t leave much room for human warmth, but that&#146;s fair game. It&#146;s more objectionable that you don&#146;t get any feeling of transcendence when you do manage to map out a piece of his labyrinth; his measured way of making art doesn&#146;t allow for those exhilarating leaps into the void. (He probably knows the answers to all of his posers, and it&#146;s too damned bad.) He can find a metaphor or symbol in anything &#150; transvestitism, sumo wrestling, you name it &#150; but his fertile mind yields sterile results. And although he&#146;s advocated an "infinitely viewable cinema," 8 1/2 Women is exasperating instead of stimulating &#150; it demands multiple viewings without inviting them.

Greenaway&#146;s aesthetic is more than merely rigorous. It&#146;s Catholic, penitential, and he&#146;s groomed the surface of his film until he&#146;s erased whatever bare evocative power it may have once had. When a naked Plummer is seen riding a horse from an angle that emphasizes her flopping buttocks, or Collette shakes off her medieval nun&#146;s habit to reveal her shaved pudenda, it&#146;s easy to look past the surface shock and see that these slab-of-meat views represent the Emmenthals&#146; bloodless way of viewing the women. Everything in the movie is held at arm&#146;s length in this way; Greenaway might as well don a lab-coat and check off the points he wants to make on a clipboard. Even worse, his one attempt at impishness &#150; Philip refuses to go to the cinema because it&#146;s "too intimate" an experience &#150; is painful in its stab at archfulness.

For a while it&#146;s fun poking about for coherent threads between 8 1/2 Women&#146;s ideas, but it&#146;s finally a Rubik&#146;s Cube of a movie. You click the pieces this way and that, and when you can&#146;t get Storey&#146;s ability to predict earthquakes to line up with the death of Hortense the pig, you put it aside, thinking maybe you&#146;ll come back to it later. Even Sacha Vierny&#146;s creamy cinematography becomes redundant when too many of Greenaway&#146;s compositions replicate the easy, static symmetry of Kubrick&#146;s Clockwork Orange period. And student-film flourishes such as Philip holding an electric-drill to his head like a gun, or the sight of Plummer clad only in whiteface and a carapace-like orthopedic corset, make you wonder where Greenaway got his reputation as a thinking person&#146;s visualist. (Perhaps there&#146;s no point in having a great poker face if you&#146;re never going to bluff.)

It probably boils down to something as simple as this: If you like Peter Greenaway&#146;s movies, go see 8 1/2 Women; but if you don&#146;t, avoid it like the plague. I don&#146;t wish Greenaway&#146;s movies out of existence (the world is wide enough to contain multitudes), but watching the work of this self-described elitist left me aching for the hoi polloi.