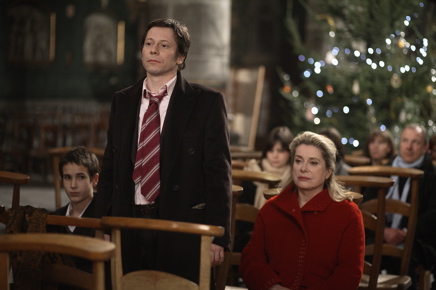 Written and Directed by: Arnaud Desplechin

Arnaud Desplechin is contemporary French cinema’s purest descendent of its Nouvelle Vague. He displays Jacques Rivette’s interest in the interplay between the artifice of art and the realities of life, Eric Rohmer’s philosophical inquisitiveness, Jean-Luc Godard’s playfulness, and Francois Truffaut’s willingness to delve into dysfunctional relationships. Despite this, Desplechin’s films still feel singularly his in the way he combines his influences with his own style and personal obsessions.

His latest film, A Christmas Tale, opens with the story of a Vuillard family tragedy that will continue to reverberate for the next forty years. Oldest son Joseph was in need of a bone marrow transplant and neither the parents, Abel (Jean-Paul Roussillon) and Junon (Catherine Deneuve), nor his sister Elizabeth (Anne Cosigny) were compatible, so the Vuillards conceived Henri (Mathieu Amalric). However, he too turned out to be unsuitable and Joseph died at the age of seven. Later the Vuillards had another son, Ivan (Melvil Poupaud), a terminally shy child who would not come out of his shell until his marriage to Sylvia (Chiara Mastroianni, Deneuve’s real life daughter).

In the present, Elizabeth harbors a furious loathing of Henri, who five years ago had bought a theater to produce her plays but he turned out to be broke. She bailed him out and saved him from jail on the condition that she would never have to see him again. However, her son Paul (Emile Berling), who has recently suffered a nervous breakdown, has asked Henri to come to the big Vuillard family Christmas gathering. Henri brings along his charmingly eccentric lover, Faunia (Emmanuelle Devos), whose body the rest of the family enviously compares to Angela Bassett’s (the humor comes from Devos not resembling Bassett in the slightest).

If that was not enough, matriarch Junon discovers she has leukemia and needs a bone marrow transplant like her late son. Suddenly everyone in the family is getting tested for compatibility and the politics of who should or should not save her or whether she should even be saved becomes a big question, especially for Elizabeth. Further setting the scene is Simon (Laurent Capelluto), Junon’s nephew, hiding a secret involving himself and Ivan that has dramatic implications on Sylvia’s view of her life.

And this is just the first third of the movie. Yet despite the potential for overripe melodrama in the plot, Desplechin studiously avoids exploiting his characters’ situations for sentimentality or easy emotional fireworks. And while relatively warm by Desplechin standards, A Christmas Tale is quite atypical of the genre the movie’s title evokes. Ivan and Sylvia’s young children, for example, put on a Christmas play that involves bestiality and dismemberment.

The proceedings among family members are affectionate on the surface with an undercurrent of acidic tension which occasionally explodes into viciousness. In one scene, Henri and Junon exchange the most scathing of insults as if they were uttering mild pleasantries. Henri plays the role of obnoxious drunken uncle to both Elizabeth and Ivan’s children and has always been the black sheep of the family. The film never comes out and says it, but Junon has probably always viewed Henri as the necessary but unwanted child who could not even serve the purpose for which he was born – to save his brother.

There’s not a weak performance in the entire ensemble although Desplechin regulars Almaric and Devos stand out. Devos effortlessly steals every scene she’s in with her blithe unflappable presence. Almaric has long outgrown his young Woody Allen-like nebbish persona and turned into one of his generation’s best actors. Coming off his superb turn in The Diving Bell and the Butterfly, it will be interesting to see how he does in his forthcoming role as a James Bond villain. Looking ever more like her father Marcello, Chiara Mastroianni has also developed significantly as an actress, having lost the self-consciousness she had when she first came on the scene.

Under cinematographer Eric Gautier’s gray and brown palette, Desplechin seems to utilize every camera trick in the book. The film is extremely stylized to the point where characters give exposition directly into the camera, and yet the style always feels underplayed and subordinate to the story and characterization, not there to dazzle. The movie is two hours long, but Desplechin keeps the scenes brief and skittering at a rapid pace. There is an unsettling sense that anything can happen at any time. The soundtrack develops the tone of the film as much as the visuals. Desplechin tosses in a mishmash of genres – classical, jazz, minimalist, Irish traditional, rap – often in ironic contrast to the action. The incompatible or over-the-top music often tilts the melodrama into black comedy.

Ultimately, what makes the movie isn’t where the story goes, but the many small, visceral cinematic moments Desplechin sketches – Henri and Faunia nuzzling at the train station, Abel’s reading a Charles Mingus score, Junon’s brief enigmatic moment of realization at the Christmas party, the expression on Sylvia’s face when she takes a liquor shot at the bar, and Henri’s mischievous glee in that final coin toss. It all gives a sense of this imperfect family dynamic attaining a sense of balance if not, in the end, some grace.