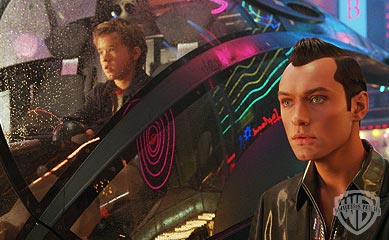 In his 1999 book Eyes Wide Open: A Memoir of Stanley Kubrick, screenwriter Frederic Raphael recounts a telephone conversation he had with the late director on the subject of Holocaust movies. (One of Kubrick’s long-gestating and never realized projects was a Holocaust film called The Aryan Papers.) After beating around the bush for a few moments, Raphael finally mentions Steven Spielberg’s Schindler’s List. "Think that was about the Holocaust?" "Wasn’t it?" Raphael replies. "What else was it about?" Kubrick’s characteristically sardonic answer: "That was about success, wasn’t it? The Holocaust is about six million people who get killed. Schindler’s List was about six hundred people who don’t."

That anecdote illustrates the gulf between these two world-renowned filmmakers as neatly as Spielberg’s tribute speech on the Oscars that same year – the one in which he praised Kubrick’s "vision of hope." Kubrick’s admirers and detractors alike had to scratch their heads, wondering to which vision of hope Spielberg was referring. The end of the world in Dr. Strangelove? The triumph of violence in A Clockwork Orange? The dissolution of the American family in The Shining?

So there was reason to be skeptical when it was announced that Spielberg would be bringing Kubrick’s last unfinished work to the screen, the robot-child-as-Pinocchio science fiction extravaganza A.I.: Artificial Intelligence. The recent publicity burst for the film assures us that Kubrick had long intended to turn A.I. over to Spielberg, and perhaps it is true. Still, can anyone familiar with the career of this notorious control freak envision him actually relinquishing creative authority over a project he’d nurtured for so many years? Whatever the case, Kubrick died shortly after completing work on Eyes Wide Shut, and Spielberg has now brought A.I. to the screen in the year synonymous with the movie’s originator. The result is an uneasy mesh of two wildly divergent sensibilities, with seams as wide as the New Jersey turnpike. It’s a weird, occasionally wondrous, and eventually downright mortifying enterprise – for better and for worse, the one unique vision amid the summer blockbuster ranks.

As the soothing voice of narrator Ben Kingsley informs us, A.I. is set on a future Earth, where the polar ice caps have melted and the great cities of the world are submerged by the oceans. What remains above sea level is populated by "orgas" – real people – and "mechas" – synthetics designed to entertain or perform menial tasks without consuming precious natural resources. Professor Hobby (William Hurt) of the Cybertronics corporation has taken the technology a step further, devising a child mecha that can actually be programmed to love its "parents." The prototype for this model is David (Haley Joel Osment), who is put into service at the home of Henry and Monica Swinton, a couple whose own invalid son lingers in a state of suspended animation.

The early scenes depicting David’s gradual assimilation into the Swinton household are tinged with an ominous emotional hue. Osment has a genuinely creepy presence here – the most chilling and Kubrickian moment in the film may be the hollow approximation of childlike laughter he unleashes at dinner one night. His interactions with Monica – who is at first terrified of him, before transferring her motherly needs onto him – form one of the most unsettling takes on the parent/child relationship since The Shining. For the first time, Spielberg seems fully engaged in exploring the darker, thornier corners of his domestic suburbia milieu. When the Swintons’ real boy Martin emerges from his cocoon and reasserts his place within the family structure, the effect on David is the realization of every child’s fear that he isn’t Mommy’s favorite after all. Indeed, it isn’t long before David is separated from his mother, seemingly forever.

The remainder of A.I. takes the form of a classic fairy tale quest, one that draws inspiration from fantasias as diverse as Blade Runner and Willy Wonka and the Chocolate Factory. There are wonders to behold here, and images you’ll want to soak in again immediately: Rouge City, with its many sly visual references to Kubrick; Gigolo Joe (Jude Law), the streetwise mecha with a jukebox in his head and a talent for pleasing human females; Fleshfair, a Lollapalooza -style spectacular with a dash of Logan’s Run; and finally the Lost City in the Sea at the End of the World, which manages to live up to such grandiose billing. When it’s working, A.I. achieves a truce of sorts between Kubrick’s cool, classical style and Spielberg’s pop instincts.

But as in Schindler’s List, with its melodramatic "I could have done more!" climax, or Saving Private Ryan, which followed its bravura Normandy Beach opening with Sgt. Rock banalities, Spielberg is unable to contain his predilection for sentiment and spoonfed meaning. Like a leaky dam, A.I. discharges occasional trickles of sap – here some cutesy business with a teddy bear, there a Robin Williams-voiced cartoon sage – before finally bursting under the weight of a tidal wave of ponderous schmaltz in its final half-hour. It’s a dumfounding sequence of events – a sort of children’s book take on the end of 2001: A Space Odyssey, as maudlin and shameless as anything Spielberg has ever done. I can’t recall ever feeling so embarrassed for a major filmmaker; the moody spell A.I. has cast dissipates so fast and with such finality, all the goodwill built up by the first 90 minutes vanishes along with it. As John Williams’ usual brand of treacle swells up over the end credits, you’ll be forgiven for thinking the music is only there to drown out the sound of Stanley Kubrick rolling in his grave.