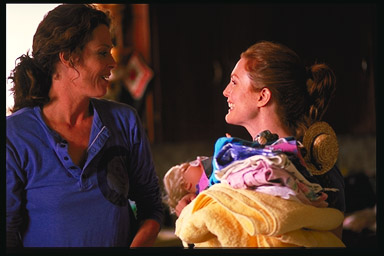 A Map of the World is a primer in lousy moviemaking, and the result of what happens when a pedestrian director shoots a tone-deaf script. Despite having a mouth-watering cast of extraordinary actors, it veers back and forth between the bland and the cuckoo before it goes howlingly astray.

Alice and Howard Goodwin (Sigourney Weaver and David Strathairn) and their two small daughters live on a mom-and-pop dairy farm in rural Wisconsin. The Goodwins&#146; marriage seems strained but functional &#150; they compensate for their daytime blankness by getting it on under the blankets at night. One summer day, while babysitting her best friend&#146;s kids, Alice allows herself to be distracted long enough for the friend&#146;s youngest girl to slip away and drown in a pond. At this point, the movie looks like it is going to be about forgiveness &#150; about Alice and her friend learning how to live with the accident, to give it proportion. But even before the emotional fallout is fully resolved, a troubled young mother from the school where Alice works as a part-time nurse accuses Alice of sexually abusing her son. When other kids echo the charge, Alice is thrown into the county lockup. Strangely passive, she&#146;d rather endure the abuse of her fellow inmates than let Howard sell the farm for bail money. The balance of the movie focuses on Alice&#146;s efforts to prepare for her day in court while trying to keep her family together.

Obviously, material like this is a minefield requiring delicate negotiation, but director Scott Elliott charges headlong across it, and everything blows up in his face. Instead of muting the story&#146;s more maudlin elements, the movie turns Jane Hamilton&#146;s novel into a dispensary of Life Lessons that Alice doles out in voiceover &#150; "There is so much good, and if we&#146;re not careful, it can slip away from us," being a fair example. Map is the kind of movie that wants us to be charmed by a moppet&#146;s shriek of protest when she&#146;s interrupted on the toilet, and to find poetic resonance in its central metaphor, a map drawn by Alice when she was a child herself.

Map takes place in a daft universe where people don&#146;t resemble themselves from one moment to the next, and where nobody notices how oddly everyone else is acting. Even if a lawyer would coldly throw pieces of candy at a client&#146;s children while chuckling sadistically, would the client really carry on the conversation as if nothing were happening? When Howard needs a babysitter so he can visit Alice in jail, would all of his friends turn him down with pod-people unanimity? Would a kind-looking family man really spit at Howard&#146;s feet in front of the kids, and wouldn&#146;t the kids demand to know why he was doing it? Such questions don&#146;t matter because A Map of the World is only concerned with making us feel. It doesn&#146;t care what we feel, or if the feeling of one second has any connection to that of the next &#150; it just wants us to keep feeling.

Not a single scene rings true in Map, and the jailhouse sequences in particular are clearly based on guesswork. (It seems doubtful that the screenwriters have ever heard black teenage girls talk.) Elliott is a stage director with no previous screen experience, and it shows. He doesn&#146;t know how to mount action with any internal logic, so that while Howard can&#146;t hear Alice yelling at him across the driveway in one shot, he hears her a moment later when she&#146;s running full-tilt across a distant field. Elliott directs as if he has a camera in one hand and a filmmaking manual in the other, and the result is a Frankenstein movie, a lumbering patchwork of predictable shots that are crudely stitched together.

Weaver&#146;s performance has drawn a lot of praise, but it may be her weakest ever. She controls every scene she&#146;s in, but she&#146;s desperately overmatched by the incoherent script, and she can&#146;t begin to convince us that the woman we see happily snapping at the elastic on her bathing suit would ever face prison with Alice&#146;s equanimity. Alice is supposed to be tightly wound in some scenes (and utterly serene in others), but when Weaver&#146;s eyes roll around in her head and she begins a backward retreat, it&#146;s hard to tell whether it&#146;s the actor or the character who&#146;s distancing herself from the proceedings.

Strathairn is yet again playing a veiled man who hides his feelings. He&#146;s always eschewed characters who are too articulate, but the milk-toast Howard who dozes off at the breakfast table while a frying pan goes up in flames four feet from his head is verging on self-parody. (It&#146;d be nice to see Strathairn in a role like Verbal Kint for a change.) Julianne Moore, as the best friend, plays the movie&#146;s most believable character, but she isn&#146;t onscreen enough to make an impression, and her scenes with Weaver are too manufactured for the women to strike real sparks off each other. (This may be Map&#146;s most unforgivable sin.) Arliss Howard overdoes sliminess as Alice&#146;s lawyer, and for some reason his physical gestures are out of synch with his speech patterns. The result is like a dubbed performance: his hands are busy punctuating words he&#146;s already finished speaking. Chloe Sevigny, as the white trash mom who causes all the trouble, isn&#146;t asked to do much more than screw up her mouth in a sour pucker.

There are some finer, darker ideas riding around in A Map of the World, but they&#146;re jettisoned before the end of the movie. Alice is an unfit mother in a very real sense. She&#146;s too pushed around by her own emotions to give children the steadiness they need, and they can goad her into acting no better than they do. (Her oldest girl is a particular pain, and eight year-old Dara Perlmutter shreds the film&#146;s genteel atmosphere in her tantrum scenes.) Alice&#146;s self-destructive behavior and her comparison of imprisonment to life on a desert island suggest that she&#146;s come to despise family life and motherhood &#150; the life that she&#146;s saddled herself with. But these ideas can&#146;t be developed without admitting that Alice is an unconscious child murderer, and that&#146;s a place the movie refuses to go. Map is more comfortable with presenting her as a slightly whacked nonconformist who must "find her way in the world." It&#146;s the final insult to an already maligned woman.