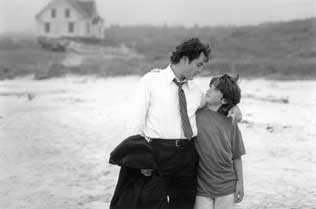 The image of independent film making as a staunch refuge of the creative and articulate takes a severe and sappy beating in A Rumor of Angels, where sentiment and the supernatural take precedent over logic, continuity, and common sense. Equally sentimental and inept, it’s a film whose heart is quite obviously on its sleeve but its brain is nowhere to be found.

Peter O’Fallon (whose first feature Suicide Kings was a rote Tarantino clone) has no one else to blame for this mess, having served as writer, producer, and director. His background is primarily television (thirtysomething and Northern Exposure) and appropriately this effort more deserves to be pared down and aired as an episode of Touched by an Angel than to waste 104 minutes of big screen time and the talents of several actors who no doubt wish they’d said "no" when the project was pitched to them.

In a story where nothing happens without the accompaniment of a deafening string chorus, 12-year-old James (Trevor Morgan) is spending the summer on the coast of Maine with his Uncle Charlie (Ron Livingston), his Type A yuppie dad Nathan (Ray Liotta), and his new stepmother Mary (Catherine McCormack), whom James detests. James is still haunted by images of the car accident that killed his mom two years ago and feels isolated from his father, who’s rarely around. In true film fashion James is cute, smarter than just about everyone else, and precocious. So precocious that he ends up damaging a fence on property owned by the infamous Crazy Maddy (Vanessa Redgrave), a hermit-like widow. Maddy then insists that James fix the fence himself as penance.

One need not be prescient to imagine all the heart-warming developments ready to surge forth, and O’Fallon doesn&#146;t miss a single one. Suffice it to say that Maddy isn&#146;t really crazy and she and James become fast friends, much to the consternation of James’ Dad. James learns to accept his mother’s death, reconciles with his father, and manages to learn to like his stepmother. Heartstrings are periodically plucked along the way. The only wrinkle that adds a note of uniqueness to the proceedings is that Maddy believes in angels and (in Sixth Sense fashion) hears dead people. Or more accurately – receives Morse code messages from her son, a signal officer killed in Vietnam. This causes a conflict between James and his Dad (who doesn’t believe in celestial communications) and sets up a conclusion that is evangelical in an unintentional way, as most will take the name of their individual Lords in vain upon viewing it. This may be a bit more plot information than is usually revealed in a review, but it is presented as a public service to convince the reader to choose another, better film at their local Metroplex.

The actors don&#146;t inhabit their roles–they’re trapped by them, forced to change behavior in bizarre unjustified fashion and spout dialog that consists mostly of platitudes. Redgrave labors mightily and fares the best of anyone; watching her performance as Maddy is like slipping into a favorite old pair of shoes. But it’s more saddening than rewarding given most of the tripe she’s asked to say. Liotta is particularly whipsawed by his character’s wide swings in personality and attitude, but then this is the kind of film in which a nice walk on the beach solves all problems and two people can go from neck popping arguments to professing their love in a heartbeat, and for no apparent reason. Livingston mostly serves as a low-rent Karl Childers throughout, sitting just off-camera and muttering gutturally.

The most notable event in A Rumor of Angels is a meteorological miracle: a torrential thunderstorm that takes place under clear sunny skies. But it’s not theologically significant. It’s a glaring continuity gaffe that is a symptom of the many things about the film that don&#146;t ring true.