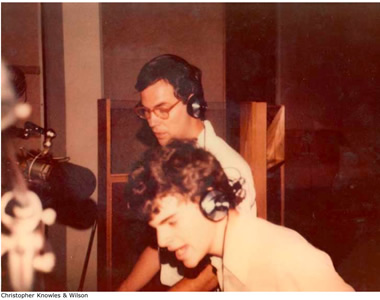 A documentary by Katharina Otto-Bernstein

A boy in a boat transfixed by light. A nail goes into a hand and someone sings. A woman in black evening dress faces the audience and fires a gun. The earth splits and boulders rain from the sky. Everything is in that face, you say, as the voice turns away. Renowned designer-director Robert Wilson’s images are all set movement, set silence too, and when the whole thing gets going you’re there inside his dream. Katharina Otto-Bernstein’s award-winning new documentary and coffee table book (from Prestel), of the same name, Absolute Wilson, tries to get inside that dream. But it’s like Jacob wrestling with the angel — he’s there alright, but how do you pin him down?

Otto-Bernstein takes a literal approach–she’s German–to her far-from-literal theatre artist subject. She lays out the bare facts of Wilson’s childhood in Waco, Texas, where he was born in 1941, son of an attorney/city manager/mayor father, and a homemaker mother, whom he describes as a "beautiful, intelligent, cold, and distant woman." His only other sibling, a sister, Suzanne–both parents are deceased– offers on-camera comments, as do many others, about her hard-to-fathom brother, who’s gay–an open secret for years–and who when asked by a shrink if he had a problem with it, offered a decisive "no."

Wilson’s answer makes it an open and shut case. Yet the sources of his inspiration–and odd, lonely, awkward childhood, and a stutter, stemming from shyness and fear–are something Otto-Bernstein pursues, but can’t get much traction on.Does amale artist’s alienation from his father, like say, Kafka’s and Spielberg’s from theirs, really explain their work? But the influences of John Cage, and that of his artistic and personal partner, Merce Cunningham, the Living Theater, as well as the dance Wilson saw at Judson Church, on Washington Square, in Greenwich Village, are easily seen and explained, as is the 60’s and 70’s counterculture ferment. But does Wilson’s distance from his parents locate his work as gay? Anddoes the scrupulously spare look of his "theater of images" since the seminal, Einstein onthe Beach (1974-76),his first teaming with composer Philip Glass, have anything to do with this orientation?

In the first case, just maybe, and in the second case, probably not, though it’s tempting to read his elegant formalism that way. But this look can be found in thework of other Wilson friends and collaborators, like Richard Serra, and dancer-choreographer Lucinda Childs, though in the director’s case, it’s his illusionist use of monumental scale, carefully calibrated color, and miracles of light, which must be perfect. And so it wasn’t for nothing that he stopped his 1991 opera with Glass,White Raven (O Corvo Branco), when it bowed at the New York State Theater in 2001, because the lights were wrong. Fortunately,that didn’t happen the night I caught this elusive meditation on500years of worldwide Portuguese discoveries, which came alive through Wilson’s mastery of space and time.

These are Wilson’s primary building blocks, which he uses in both personal–intimate and epic, sometimes both at once–and utterly unique ways. Yet Otto-Bernstein’s clips, though well-chosen, never convey what seeing Wilson live is like. Instead we get a sort of cut and paste look at bits of Einstein, The Black Rider (1990 ), seen at ACT 2 seasons ago, and the never performed in one place, the CIVIL warS (1984), and other major works, which though fascinating in and of themselves, don’t put us anywhere near what makes this artist tick. Which isn’t to say that the director should get the intention and "the meaning" of the work, because the work of any real artist is elusive, "a private bell for inexplicable needs", in Tristan Tzara’s pregnant phrase. But we still need to see why Susan Sontag saw Einstein 40 times, or why critic John Simon feels Wilson has nothing to give the theatre. Failing that, Otto-Bernstein provides a solid enough overview for the curious, and maybe some cognoscenti, but not one which gets at the magic my friend Jose got at an entirely different theatrical event, The Phantom of the Opera, which he caught front row center, on Broadway. "I was so close but I still can’t see how they did it." And if there’s no magic, you haven’t done your work, and Otto-Bernstien’s subject more often than not goes up in smoke.

Her book is much more stimulating. Or you might check out Laurence Shyer’s book, Robert Wilson and His Collaborators, which has this juicy quote from Maita di Niscemi, who worked with the artist on the CIVIL wars, "He (Bob) lives in outer space and that’s the most expensive place in the world to live."