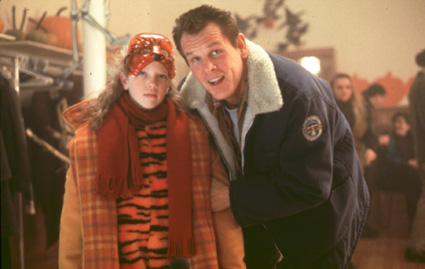 .. One of the very best films of 1997 was The Sweet Hereafter, Atom Egoyan’s adaptation of the brilliant novel by Russell Banks. Now we have another fine Banks novel, Affliction, brought to the screen by another first rate director, Paul Schrader.

Affliction is a very dark exploration of the effects of alcohol and violence on a New England family. It goes beyond chilling; this is a work that has the physical look and the emotional feel of icy cold New Hampshire winters. In a number of ways the book and the film have shifts of focus and, certainly, one might prefer one or the other, but both bring out their themes with extraordinarily moving and effective artistry.

Using a voiceover by Rolfe Whitehouse (Willem Dafoe), the filmtells the story of his brother Wade, played by Nick Nolte in an intense, multileveled performance, the finest of his career to date. Both brothers are the victims of an abusive, violent, and alcoholic father (James Coburn). Rolfe’s defense has been to withdraw – he left the town where they grew up, but he also, from childhood, backed away emotionally. The tone of the voiceover is detached; it is almost like listening to a reader hurrying through a text about something foreign and unrelated, about which he has detailed knowledge, but scholarly detachment. This was a minor error of choice on Schrader’s part, because the tone comes out with a dulling monotony; the detachment of the narrator could have been fully achieved with the words themselves and with skillful acting, a more varied, more interesting tone of voice.

In contrast to Rolfe’s withdrawal, Wade remains utterly vulnerable to the abuse that he suffers from his father and from the tribulations of his day to day life – his relationships with his ex-wife, the daughter he loves, his employer and his jobs as part time town cop, well driller, snow clearer. His emotions are right on the surface, frustration and anger at the things that go wrong in his life, even as his inappropriate or inadequate responses deepen his problems rather than solve them, accentuate his pain rather than relieve it. Wade drills wells, but he can’t get beneath the surface of things; he clears snow, but can’t clear his thinking; he is a peace officer who knows no peace.

Rolfe is a sad character; he has gotten out from under, but effectively stopped having a life. Wade is a genuinely tragic character; he never stops being human, never stops fighting the multiple sources of pain in his life, never stops feeling that pain, even if he often fails to understand or acknowledge it. It cannot be excised like the tooth that aches him throughout. Even Wade’s warm relationship with his current girlfriend, Marge (Sissy Spacek), goes awry, as it must, since his motivations have more to do with visiting rights with his daughter and the care of his father, than with what goes on between him and Marge. Nolte manages to keep an air of bewilderment about the character; he never quite knows why things go so wrong.

The book shows more of the real beauty of winter in New England, effectively contrasting that background with the hardscrabble lives of people there, their shabby structures dotting the snowy landscape like so much detritus, their lives of struggle for economic survival disintegrating into emotional detritus. Schrader misses the opportunity for this contrast, but nonetheless, the well focused, rather straightforward exposition of the events of these days in Wade’s life are gripping, the downward spiral taking on genuinely tragic inevitability.

There are nicely crafted plot elements that provide the narrative background: a deer hunting episode with a maybe (maybe not) accidental shooting, Wade’s plan for a custody fight for his daughter, the death and funeral of his mother, some real estate wheeling and dealing, a speeding ticket. The events provide the framework from which character is revealed, powerfully and deeply.