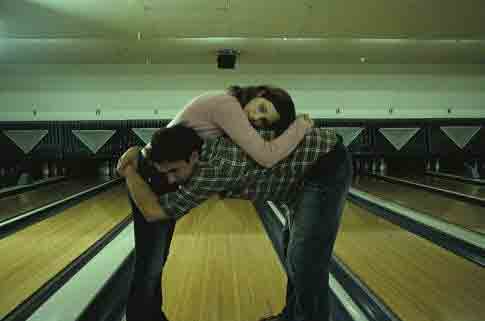 David Gordon Green got a lot of press, if not a lot of audience, for his debut film, George Washington, in which he achieved some poignant poetry in a markedly original style, but was noticeably missing dramatic momentum. With All the Real Girls, Green returns (with a significantly enhanced budget) to the same small sleepy southern town, a town that is frayed at the edges, but in which his camera finds unexpected beauty. Like John Sayles, Green is good at developing a sense of place; he takes the time to show the steam belching out of a factory’s smoke stacks and he gets inside the factory to see the knitting machines, too. As in George Washington, he explores the abandoned and decaying shells of buildings by the river, the train tracks that the railroad seems to have forgotten, and the stunning landscapes of the surrounding mountains.

Where in George Washington Green’s subjects were members of a group of young kids, in All the Real Girls he tightens his focus to two–a young couple falling in love and coping with all the angst that comes with the territory. Paul (Paul Schneider) is a local Casanova, who has bedded half the women in town and, apparently, broken all their hearts. Noel (Zooey Deschanel) has returned to town from boarding school and fallen for Paul who is hesitant, both because Zooey’s brother is his best friend and because he’s developing some real feeling for Zooey, inspiring him to change his philandering ways.

Concentrating on this relationship, Green finds a stronger plot line than he did in George Washington; All the Real Girls develops some dramatic tension in the arc of Paul and Zooey’s romance, providing the energy of a story moving forward that was largely absent from the earlier film. But Green continues to use the same style of episodic scenes (often interspersed with those elegant landscapes). In some cases, as in a scene between Paul and Zooey in a deserted bowling alley, it’s totally disconnected from what comes before and from what comes after. It seems odd that they are in that particular place, standing in the middle of the lanes for no particular reason; it doesn’t ring true and it comes off as a rather forced and affected conceit on the director’s part.

Green follows the ups and downs of their love affair and finds the unique mixture of bitter and sweet that seems to come universally with first love. His dialogue, when direct, emanates a simple sincerity that sometimes works, as when Paul says to Zooey, "I like hanging out with you because you look around and listen." But this is dangerous territory and can easily slip into the banal, as it does when Green has them doing poetry: "I had a dream you grew a garden on a trampoline and I was so happy I invented peanut butter."

Both Schneider and Deschanel (The Good Girl, Almost Famous)are attractive and engaging young actors and they serve Greene’s story well. But while he nicely captures the moments and feelings of the affair, Green doesn’t dig deeply under the surface of the characters. He doesn’t reveal much more about Paul than his reputation as a Lothario and that he works on cars. Some of the family relationships are briefly explored, but they are glossed over rather than probed. The character of Paul’s mother, Elvira (Patricia Clarkson), who volunteers at a hospital where she entertains the kids as a clown, has a past of her own, but it’s only hinted at–she may be the most interesting, quirky character in the story, but she gets minimal screen time. And if Zooey is the smart, educated boarding-school girl, Green lets none of that show through in what transpires on screen; she seems no different than any of the other small town girls who never left home.

In the end, then, Green has made a mood piece–a sweet glimpse into young romance, delivered with his flair for style, but, in the end, unsatisfyingly skimming the surface. All the Real Girls is not the disastrous disappointment that second films often are, but it hasn’t moved much forward from George Washington, either.