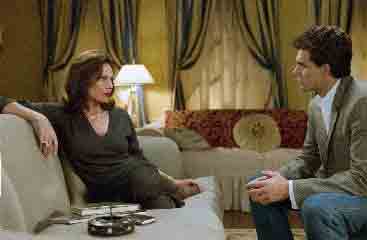 There is a certain confusion evident in the publicity for America’s Prince. The description of the film at TBS’ website says it "intercuts interviews with people who knew John well, to get a better understanding of the man behind the headlines." What actually is offered in the film are talking heads that are staged, scripted and professionally acted, representing fictional people. There’s Richard Lawton (an insufferably pompous Colin Fox), ostensibly "an old friend of Jackie’s." Another is smug and self-important Douglas Conte (Michael Riley), a fictitious biographer of Kennedy’s.

The "mockumentary" film is not a new phenomenon. It uses the techniques of successful documentaries (talking heads, archival footage) to replicate the sense of immediacy and reality that help make genuine documentaries effective. The form is generally used for purely fictional efforts such as the wildly successful The Blair Witch Project or for satirical effect, such as in This is Spinal Tap and Woody Allen’s Zelig. Then there are the manipulative and journalistically questionable antics of Michael Moore (The Big One, Roger and Me) who stages his one-sided "documentaries" to support his political views. In the former cases, the fiction is clear and the technique is legitimately applied. In the latter, whether or not you agree with Moore matters not; he’s deceptively using the form as if presenting factual material, as a traditional documentary might.

But what is it that is happening with America’s Prince?JFK, Jr. was etched in the memories of a generation of Americans when as a small boy he saluted the coffin of his assassinated father–an image that is used in this film. As an adult, he was haunted by the paparazzi who capitalized on his appeal as a celebrity–a handsome, privileged man who romanced movie stars and fashion models and who worked as an attorney in the New York D.A.’s office. The major venture that did propel him into the public domain was his launching of the magazine George, intended to capture the public’s interest with a glitzy take on politics. It survived only with the JFK, Jr. charisma to sell it. Finally, there was the tragic ending when he lost control of his small plane and it fatally crashed.

The fact is that there isn’t a whole lot in JFK, Jr.’s adult biography of interest as anything but soap opera. His romances and his relationship with his mother were personal and of public interest only at the tabloid level. His greatest day-to-day tragedy, which he bore with astounding patience most of the time, was the constant hounding of the photographers and the press; his life was lived in the proverbial fishbowl.

America’s Prince cynically picks up where the press left off. It applies the mockumentary technique to a real life, confusing fact and fiction, claiming the above-mentioned "interviews" as if they were real, creating phony black-and-white "archival" footage, and playing out scripted scenes, consisting of no more than one writer’s imagined dialogue. The mockumentary technique as used here is intended to lend credence to mere guesses as to what these people might have said to one another, to give the illusion to the unwary viewer that what they are seeing is an inside look at American "royalty." Since it is not intended to mock, it would more accurately be called a pseudo-documentary.

The result is uncomfortably misleading and will interest only those more interested in soap than in history. Despite grandiose claims to research and accuracy, America’s Prince shoots itself in the foot with its cynical methodology. It accomplishes no more than to continue after his death the opprobrious exploitation by the media that JFK, Jr. suffered during his life.