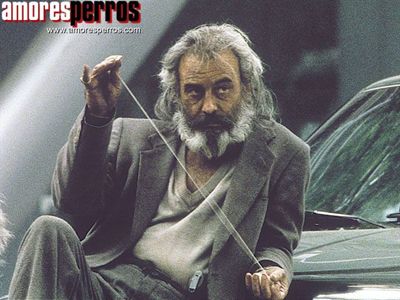 Alejandro Gonzalez Inarritu’s Amores Perros ("Love’s a Bitch") may be the first film that opens with a disclaimer explaining that no animals were harmed in its making. Thirty seconds into the first scene, it’s clear why: two young men careen through city streets, chased by gunmen in a pickup truck. In the back seat of their car lies a dog, drenched in blood and keening in agony.

Amores Perros tells three separate tales, all of them building from the same car accident on a Mexico City street. With a nod to Pulp Fiction, writer Guillermo Arriaga has structured the film in fits and starts, opening with the first story’s conclusion, then finding clever ways to keep us puzzled as to how we’ll get from one panel of the triptych to the next.

In the first tale, Gael Garcia Bernal plays Octavio, a sweet kid who lives in a cramped tenement with his mother, his thuggish brother Ramiro (Marco Perez), Ramiro’s high school-aged wife Susana (Vanessa Bauche) and their baby. Octavio is biding his time, waiting for Susana to finally get sick of Ramiro’s brutality and run away with him.

One day while Octavio walks Ramiro’s enormous mastiff, it gets into a snarling match with the reigning champion of the underground dog fight circuit. Octavio smells an opportunity for escape, and begins entering his beloved dog into the fights, where it slaughters – literally – all the competition. (These scenes just skirt exploitation, focusing as much on the casual cruelty of the audience and owners as on the unrelenting bloodbaths of the fighting.) Before long he’s put together a nest egg, begun wooing Susana in earnest and enraged his hapless competition.

It’s a lurid scenario straight out of Rickie Lake ("Today’s Episode: I Love My Brother’s Dog…and His Wife!"), but Gonzalez Inarritu cannily balances the melodrama with starkly naturalistic detail. He settles into the grimness of his characters’ lives: the palpable heat and stench of the dogfights, the way that an absent Ramiro imposes himself on the household through intimations of violence. It’s a trick that’s at least as old as the Italian neo-realists, and it’s just as effective here: the grimy surface distracts us from the tawdry pathos of the story.

In the second story, Daniel (�lvaro Guerrero), a wealthy businessman, leaves his wife to move into the apartment he’s set up for supermodel Valeria (Goya Toledo). Almost immediately, she ends up stranded there, spending long days listening to her dog Richie moan after an accident leaves him trapped beneath the floorboards. As they struggle to free him, their relationship deteriorates.

All pretense of bathing us in squalor is gone here, replaced with the aridity of a minimalist nouveau riche condo. There’s potential for a great story in the scenario, showing how the most inane crisis can force realizations about the character of our partners. But this remains unrealized, in favor of a dim stab at social satire (the film milks the ineptude of the pampered rich for laughs – anyone else could have the dog free in ten minutes). The further the story digs into their arguments, the more banal it becomes; long before its over, we’re impatient for the final story to start.

In the third tale, Emilio Echevarria plays El Chivo, a former guerilla terrorist who abandoned his family for politics and now lives on the streets, surrounded by a pack of dogs. Hired by a corporate ninny to kill a business partner, he takes the job with some reluctance, relishing every opportunity to remind his employer that he’s a petty coward for hiring him.

Quentin Tarantino’s influence is clearest here, from the torture scene set to a peppy, singalong pop hit to El Chivo’s path to redemption via assassination. Now that American independent films are finally breaking free of Tarantino’s impact – you see far fewer wacky tales of gangsters spouting endless pop culture references these days – it looks like he’s making himself felt in other countries. In this case, it’s not a bad thing at all. Unlike Guy Ritchie, Arriaga and Gonzalez Inarritu have pulled something more from PulpFiction than a scrambled structure and a propensity for violent sight gags. El Chivo’s slow march back to humanity is a more substantial rethinking of Samuel Jackson’s moral awakening in the diner. Echevarria’s gravity and wit lend the scenario a weight that Tarantino never attempted. There, we watched a hit man stumble towards grace. Here, we come to fully understand what led El Chivo to such depths and how difficult his attempt to regain his soul will be.

Following two uneven stories that flirt with soap opera with this deeply felt, challenging tale is a very smart move – the bad middle third dissipates in its wake. It’s a remarkable little movie adrift in a much less involving omnibus; if he can develop from its strengths, Gonzalez Inarritu’s next film should be worth searching out.