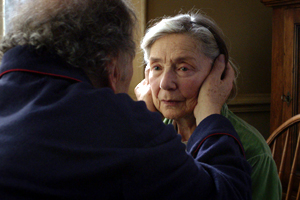 The amour in Austrian director Michael Haneke’s (“Caché,” “The Piano Teacher”) “Amour” is not the kind of love often glamorized in movies. Instead, it’s the devotion and sacrifice that comes with years of a life spent together, committed to shared goals and passions.

Anne (Emmanuelle Riva) and Georges (Jean-Louis Trintignant) are a couple in their eighties. Retired music teachers, they live the comfortable life of the Parisian haute bourgeoisie—attending concerts, listening to CDs, inhabiting a beautiful pre-pre-war apartment filled with the accumulated possessions of decades of marriage. The whole film, except for a scene at the recital of one of Anne’s former students (pianist Alexandre Tharaud, playing himself) and their bus ride home, is set in or just outside of the apartment.

The morning after the concert, Georges and Anne are having breakfast when Anne suddenly tunes out: she’s immobile, unresponsive. She’s had a stroke that eventually leaves her paralyzed on her right side. This is followed by a second, even more debilitating stroke. Georges, keeping his promise not to send Anne back to the hospital where an ineffective operation was performed, cares for her at home—helping her up from the toilet, later changing her diapers, feeding her pureed food, spoonful by spoonful. Eventually he hires nurses. The couple’s brittle daughter, Eva (Isabelle Huppert), also a musician, comes by but is little help. Georges flares out at her and at one incompetent nurse, and though his reactions seem overly hostile, it’s not hard to understand the pressure he’s under.

Among the things that make “Amour” remarkable are what it lacks: no background music, even over the titles; no sentimentality; no moral to take away from the theater. The film is brutally clear-headed. For anyone who has been through similar health crises with parents or grandparents (or one’s own self or a partner), it’s as painful as it is beautiful.

The acting is so simple and straighforward that it doesn’t seem like acting at all. For those who remember Emmanuelle Riva in “Hiroshima Mon Amour,” or Jean-Louis Trintignant in “A Man and a Woman,” seeing them with the (apparently) unretouched wrinkles and blotches of old age can be a shock. Like “Amour,” it’s a preview of what awaits us all.